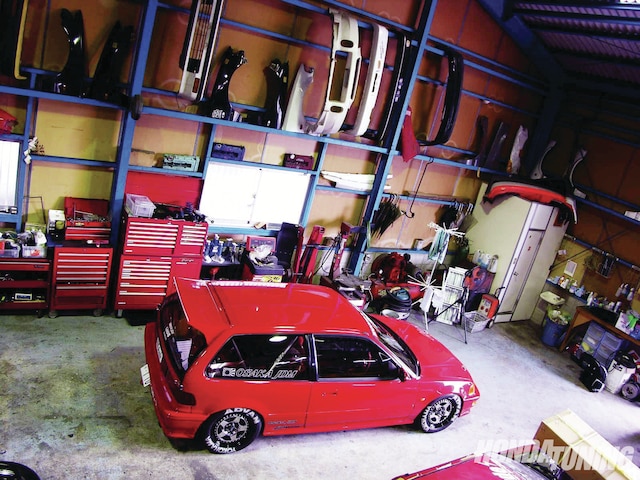 A hockey mask hangs from the driver’s seat like a knight’s helm: ready to be snapped on at a moment’s notice for combat. Caging, bracing, and floor grids proudly proclaim that this car is ready for battle. There’s something about this car that tells me it brings the heat in the streets. And, no, I’m not talking about seeing whose car is faster 0–60, or how it handles in a quarter-mile pull. I’m talking about the stuff we only get to see when playing video games or watching indecipherable YouTube videos from the land of the rising sun, complete with insane driving that includes weaving in and out of traffic at 3 a.m., dodging the cops, and keeping it on the “right” side of the road. It’s called Kanjo Racing, and it’s the kind of heat you can expect on the Osaka Hanshin Expressway Loop.

Now I’m not condoning any law-breaking activities here, but there is a reason this car is set up the way it is. A B16A powerplant with the right mods can really zip through traffic when properly prepped in the chest cavity of an EF, so when I asked the car’s owner about this choice of powerplant, he responded, “Power is charming, but driving skills and good judgment are always what keep you alive and out of jail on the Loop.” He went on to tell me about cars with turbo setups that he had seen wreck because they were going too fast on the Loop, and were simply unable to stop fast enough when traffic got too thick. Then, there’s the added consideration of having a teammate with you. No, I’m not talking about some lackey, just riding shotgun, who tells you when to turn. This guy would be a fellow Honda-head, who is on your team and is racing right alongside you. So now this means you also have to make sure you keep your teammate safe as well. Oh, and did I forget to mention this whole time you are wearing a sweaty hockey mask that blocks all of your peripheral vision and smells like your high school gym locker floor? Ah, the things we do for adrenaline…

Enough about the race, let’s take a minute to talk about the beautiful specimen that sits in front of you.

It’s really a well-built EF chassis, and it has some major USDM external “upgrades” to make it stand out from the Japanese crowd. (As if it doesn’t stand out already.) This car has seen numerous upgrades, overhauls, wheels, and near-death experiences. Its owner has the sharp steering response of a seasoned veteran and says that more mods are on the way. His loyalty to Osaka JDM is second to none, and he promises to bring his SiR-2 to them as long as they keep landing/fabricating parts for the beloved chassis. To emphasize this fact, note the spec list—there are one-off parts all over this car from these guys! Everything from the heel guards to the catalytic converter to the 14-point cage are custom fabbed to this owner’s needs. I would be pretty damn loyal as well if someone put that much skill into workmanship on my car!

After I snapped some shots of the EF, the owner shook my hand and said he had to go to work. I guess even a dedicated daredevil has to get funds somehow to feed his hunger for death-defying derring-do. So I shook his hand, complimented him once again on his choice of chassis, and sent him on his merry way. As he drove off with his hockey mask swinging from the back of his seat, everyone in the shop bowed, showing the respect and courtesy you learn to expect in this great country of theirs. Amazing. Even though this customer is a good friend of 20 years, they still adhere to the ceremonial civilities that make Japanese customer service the best in the world. 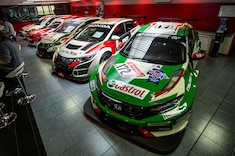 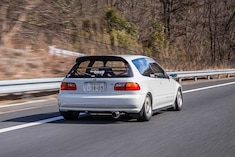