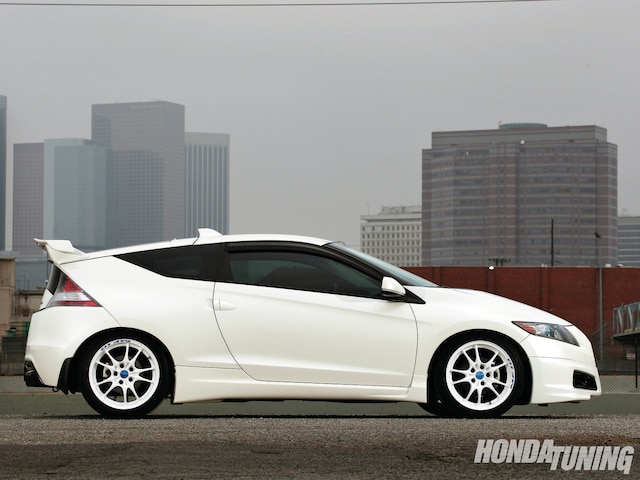 The days of seeing strictly brand-devoted Honda builds seem to be fading into the past. While it’s always cool to see the occasional “catalog car” built around one particular aftermarket tuning company’s specifications, you can’t deny that they’ve been done to death. You wouldn’t be a dedicated Honda-head if you didn’t appreciate a Spoon-catalog car, but you know you’ve seen them more than a hundred times. The Honda community is very heavy on competition now, and the builds represent that. Everybody wants to be different, to stand out from the crowd. If you built a Honda with a grouping of parts from just one manufacturer, you would just be building something that other enthusiasts have already seen before. Trying something new and refreshing will only make your project better, and we can all appreciate that. For years it seemed there was nothing more “JDM” than creating a car that looked like a demo project from your favorite Japanese tuner. Again, in the last decade or so, it’s been done over and over—you want to create your own look now. You want to separate yourself while still being able to utilize components from your favorite aftermarket brand.

Brian Nguyen knows all about being brand-specific. He’s built a couple of Hondas in the past, and if you’re familiar with his previous RSX project, you’ll know that Brian is a very devoted Mugen aficionado. His old Acura project was pieced together using a complete, authentic Mugen aero kit, rear wing, and a mint set of Mugen wheels. While he has been loyal to the legendary Japanese label, Nguyen is also very knowledgeable when it comes to building show vehicles. His RSX was a thoroughly built show car, inside and out, and garnered numerous awards when it was competing at events. There was nothing left untouched on that car. It was the embodiment of what you would think of a Honda show car to be—almost to a fault.

“I went all-out with that (RSX), and I realized I didn’t want to take that route with my next car,” Brian explains. “As fun as it was to build a full show car, it just wasn’t practical as a daily driver. Back then it was the only car I had, and honestly, it was just a pain in the ass to drive every day. The ride height was really low, and the authentic Mugen kit is not something you want to damage. I would have to worry about that all the time, even when it came to something as simple as picking up some food.”

There’s no argument his RSX was deserving of all of its accolades, but as things go with most young Honda enthusiasts, there’s a point in time when you just have to move on. In the years that Brian spent building his DC5, he also did a lot of growing up in his personal life. He finished college, eventually sold his RSX, and even started a reputable insurance company with some friends. For his next project, he knew he wanted another Honda, but there was just a matter of building it the way he liked while still retaining its drivability and practicality.

“I’ve always been a Mugen fan, so I knew it was going to have a Mugen theme. After starting up my business, I had to do even more driving than I did when I was going to school. Gas isn’t getting any cheaper, and the miles I had to drive everyday were growing. I wanted a good amount of Mugen parts in a car that was good on gas, and the CR-Z was just a logical choice.”

The hybrid CR-Z is still fairly new, but Mugen had already introduced a complete aero kit for it, and Brian spared no expense in getting his hands on the goods. The complete kit consists of a front half bumper add-on, side skirts, rear lip, rear wing, and a front grille. He had the kit color-matched to OEM specifications and immediately installed it. Adding some non-Mugen parts was just fine by this owner, as long as they didn’t take away from the functionality or stray too far from the sleek look of the project. A center-exit diffuser and exhaust system from another popular Japanese tuning company, Noblesse, adds a unique touch to the car’s backend.

Though Brian toyed with the idea of running various other aftermarket wheels, he was just too fond of classic Mugen wheels to pass them by. The combination of a timeless wheel on a newer chassis like the CR-Z is an instant attention-grabber. Though he’d held on to a set of 16-inch MF10s from his previous build, the wheelwells of the ZF1 chassis made them look far too small. He knew he had to find a larger diameter, and he managed to source a set of 17x8 MF10s. They weren’t exactly in the best condition when they were picked up, but luckily Brian had a close friend at Wheelflip—a company that specializes in reconditioning popular Japanese wheels. Brian had the crew at Wheelflip powdercoat the wheels in white to match the car’s exterior, and he even found a set of anodized blue MF10 wheel caps to match his blue Bride Gias seats.

So where’s the K swap? This is something that the majority of readers will no doubt be asking, but that isn’t the type of build Brian was interested in. The engine of this hybrid Honda is mostly stock, and that’s exactly how Brian plans to keep it. Being a daily driver, he’s not interested in doing anything to jeopardize the functionality of the motor. A peek under the hood reveals only a custom cold-air intake, created by Black Label Fabrications, and a Spoon reinforcement brace. You won’t find anything over-the-top like he once had on his RSX. A simple, clean cruiser that sips gas, and looks good as the miles pile on during its daily driving duties.

“I have no complaints at all about the simplicity of my build. Everyone tells me I should go lower and whatnot, but I choose not to because I have to drive this thing everywhere. Right now, it’s at a perfect height for me to go over speed bumps and steep driveways without having any worries. Sometimes I get the urge to do something crazy to the engine, but I always come to my senses. This is the car I drive to the gym, the mall, and to see my clients. I’m a die-hard car enthusiast, but I’m also a responsible businessman now.” Priorities—some simply have none. Others, like Brian, know exactly what they’re doing.

Photo 6/7   |   The original 1.5L hybrid motor is outfitted with just an intake and exhaust as maximum mpg take precedence.

Inspiration for this build
Just wanted a clean daily driver

Been There, Done That

If you aren’t familiar with Brian Nguyen’s DC5 RSX, you are missing out on one of the best RSX builds to date. Not only did his RSX have a complete Mugen aero kit and wheels, the engine bay was also incredibly detailed. It showcased a complete wire tuck along with a neat feature that many had not even attempted back when the car was in its prime: a tucked air-conditioning system. Brian did a lot of research, had custom airconditioning lines made, and was one of the fi rst guys to have a tucked, functioning system for that chassis. His DC5 was no slouch, either, as he opted for a supercharger. Now you know why he drives a gas-effi cient hybrid. If he still had to daily drive a supercharged show car, there’s no doubt the money spent on gas as well as possible speeding tickets would have caught up with him! 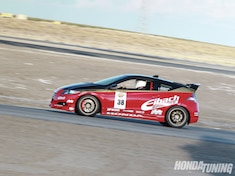 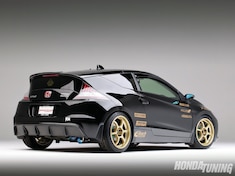 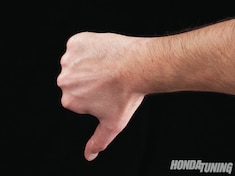 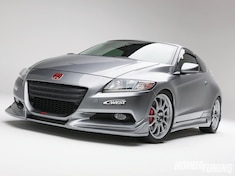 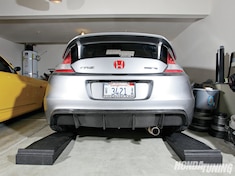 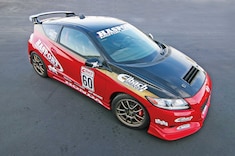