A gasp could be heard across the entire Honda community in late 2001 on the cusp of an announcement that seemed more like a cruel joke, rather than a step toward a brighter future. Honda’s execs confirmed the numerous rumors surrounding the demise of the legendary Integra chassis, and enthusiasts far and wide held their breath in anticipation of its successor. Adding to Acura’s letter series’ chassis lineup in place of actual model names, the RSX was introduced and at first glance, showed signs of promise. A refined, somewhat muscular physique backed by the larger, albeit unknown K-series engine had many looking past their initial thoughts of betrayal by their favorite carmaker. However, as with any new model, a sort of break-in period is needed before new models start pulling in fans.

Originally owned by a privateer, the bright white RSX you see pictured was stripped and intended for battle right from the very start. APM Racing adds, “The car was passed to us in the shape of a shell with nothing in it—bare bones. The previous owner intended to field this car into pro racing with a simple rollcage and a gung-ho attitude. While determination is good, the execution was lacking due to funding, development, and time.” Coming to the realization that he’d probably bitten off far more than he could chew, he sold the RSX to APM Racing. As exciting as the prospect of a new car destined for competition can be, the APM crew boxed the car up and placed it into storage for about a year. When the car did eventually come out of hibernation, development of the chassis moved at a snail’s pace in the beginning. “The development cycle on this car was slow at first, as none of the staff was familiar with this chassis. The build was orchestrated by Tom Takamoto, whose background comes from vintage car racing, Formula Atlantic Series, Indy Lights, and Trans Am. Through the combined efforts of Tom, Brad Kikkuni, Franco Ruiz, and Jorge Hernandez, the car started to come together with the right mix of parts, concepts, and ideas.”

One of our community’s biggest gripes with the RSX replacing the Integra is undoubtedly the decision to move away from the very suspension configuration that made the car famous. While it was marketed as the perfect combination of comfort and stability, the Control-Link MacPherson strut front suspension appeared to be a production and packaging issue rather than a leap forward in performance handling. APM Racing states, “The RSX chassis is known for handling issues, mainly due to the MacPherson strut in the front and the double wishbone in the rear. With a lack of support in off-the-shelf performance products in this category, we tried various setups to help reduce the handling handicap while staying within the rules of various sanctioning bodies of competition.” Research and development on and off the track led to positive results, and eventually the team was granted entry to the SCCA World Challenge at the Long Beach Grand Prix with Dale Laakso in the pilot’s quarters. Laakso’s background in open wheel Sprint cars meant he was a natural behind the wheel of the RSX, though the World Challenge was his first time piloting a road car in a wheel-to-wheel race event.

As with any race vehicle that ventures into various events, the APM Racing RSX is fitted with components that suit multiple sanctioning bodies. Under the hood, the original K20 is replaced by a K24 with 12.5:1 compression thanks to JE Pistons. Kelford 179-B cams and Comptech headwork make up the top end and are overseen by an AEM EMSV2. With tuning emphasis placed on reliability and usable power, a mere 220 whp was found. And while it may seem quite tame to many focused on big peak numbers, it’s what’s under the chassis that really pushes the car into deep competitive territory. Multiple Tein coilover kits are kept on hand and chosen specifically for each track event based on the crew’s experience and long list of notes. Hotchkis antiroll bars and Energy Suspension bushings work in conjunction with the custom-built APM alignment kit, while a complete StopTech braking system scrubs speed at the driver’s discretion. The importance of functional aero is something that the guys at APM Racing take very seriously, and they’ve managed to come up with their own front splitter, rear wing, and rear diffuser combination. The sharp-edged diffuser is actually borrowed from a non-Honda and “massaged” into place.

In 2011, APM Racing began competing in the MotoIQ Pacific Tuner Car Championship. This series features a power-to-weight ratio class system, and brings out some very competitive drivers, typically from the West Coast. Taking driving duties into his own hands, APM Racing’s owner, Richie Ho, is also its current pilot. After spending time in Asia sharpening his driving skills, Ho managed several podium finishes throughout 2011 and led the team to a second place finish overall.

Although it took a number of years, the RSX has gained serious popularity since its introduction to U.S. buyers. Suspension shortcomings can certainly be overcome, and while some might argue that the RSX will never properly replace the legend that is the Integra, APM Racing has more than proven that the chassis can be every bit as competitive, and the company is working on making a whole new legend—one forged through research, hard work, and determination.

Dream car
You’re looking at it

Inspiration for this build
To go fast!

With as much success as the APM Racing team has experienced, it hasn’t come without hard times both inside and outside of the racing world. APM Racing states, “One of our team members has been affected by agnogenic myeloid metaplasia with myelofibrosis, which has progressed to acute leukemia. We support them everyday and dedicate our hard work to them. Please support the ‘Be The Match’ program.”

The Be The Match Foundation raises funds to help patients who need a bone marrow or umbilical cord blood transplant find a donor and receive treatment. For more information on the program and how you can help, please log on to www.marrow.org. 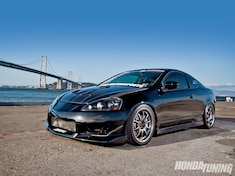