The World Premier Of A Drift Scion 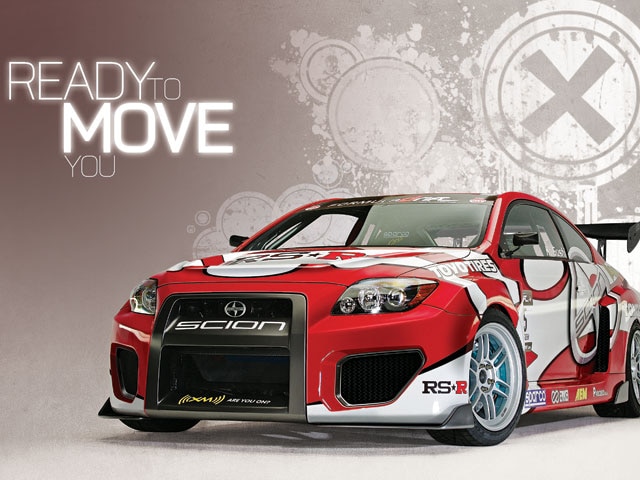 Ever since I've known Ben Chong, he's been into cars. To call him an enthusiast would be like calling Jessica Simpson a blonde--a severe understatement. Like a handful of us lucky enough to transition a hobby into a career, Ben started with RS-R in 2002. Now the director of business development, Ben has taken development seriously for the past five years. 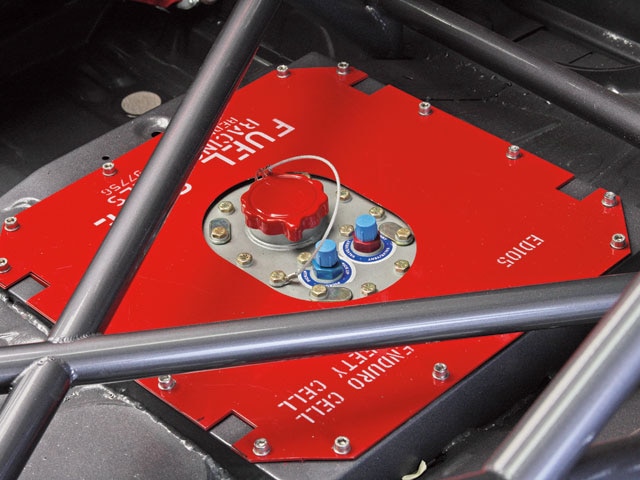 Before Formula D and D1 ever smoked up the now infamous Irwindale Speedway, RS-R was the first to hold a drift competition on the infield with D1 judge Orido. In July 2003, 2NR featured their D1 exhibition 350Z on our cover. More recently, Ben helped develop and run the S2000 Formula D drift program--launching Alex Pfeiffer and Tyler McQuarrie into the spotlight. Now Ben and RS-R are back in drifting with a whole new car, the Scion tC; 2NR got the inside scoop on what it took to make it happen. 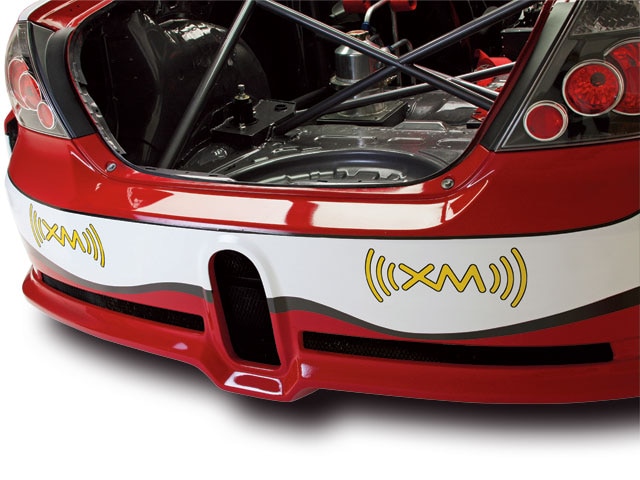 From the mouth of Ben Chong:
To get a car to drift is not as hard as some people may say it is. Some basic modifications, hours of seat time, and a whole lot of tires will get you on your way to smoking sideways in no time. Of course, today your daily driven street drifter wouldn't cut it in the professional circuit. The ante, as they say, has gone up. Professional drifters battle ferociously and are always on the lookout for that extra edge. 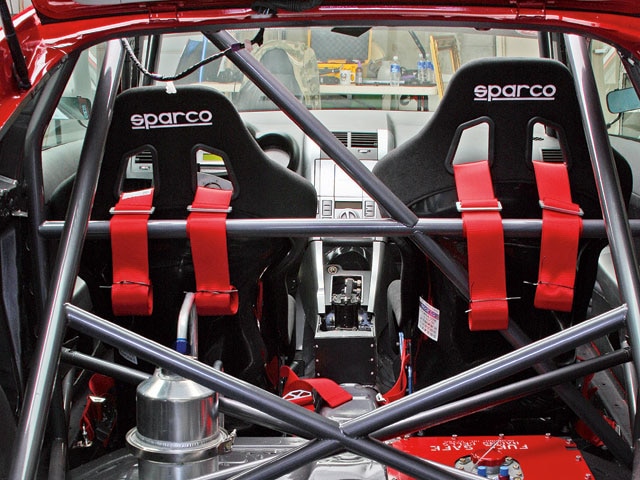 After four massive years into Formula D, the roster of seeded and un-seeded cars is diverse: from Toyota Corollas to Dodge Vipers, and Nissan 240SXs to Ford Mustangs, domestics and imports now compete at a professional level. But a few years back, not all of these makes made for the typical drift car. One example of a ride that seemed unorthodox at the time was our RS-R Honda S2000. This was a vehicle that upon its very conception was something that everyone thought would fail on its quest to become a competitive vehicle. But here at RS-R we took this roadster and modified it to not only break traction, but to maintain a slide in any given direction, have the ability to change its line and angle at will, and also equipped it with sufficient horsepower-to-weight ratio to work the competition. What most said could not be done, was done. 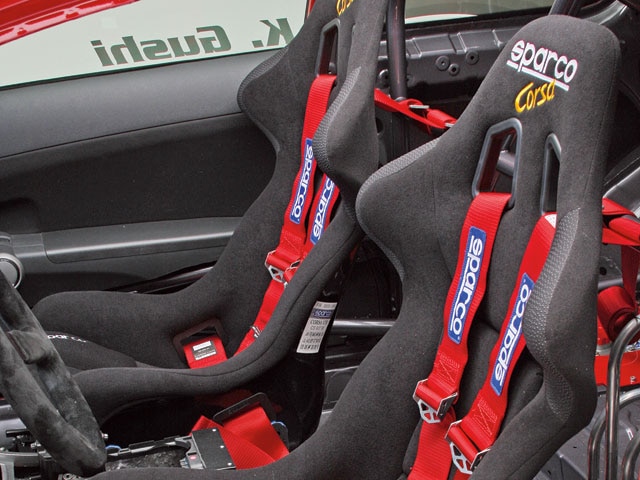 After pulling out of Formula D in 2007, all seemed quiet. Many wondered where the first Honda that competed professionally went. Well now it's 2008, a new season of Formula Drift is upon us, and RS-R is back with a completely new ride. When RS-R premiered the S2000, it gave Honda fans something to cheer for at drifting events. Now, after two long years in the making, RS-R will give a new generation of fans a new drum to march to: the Scion tC. 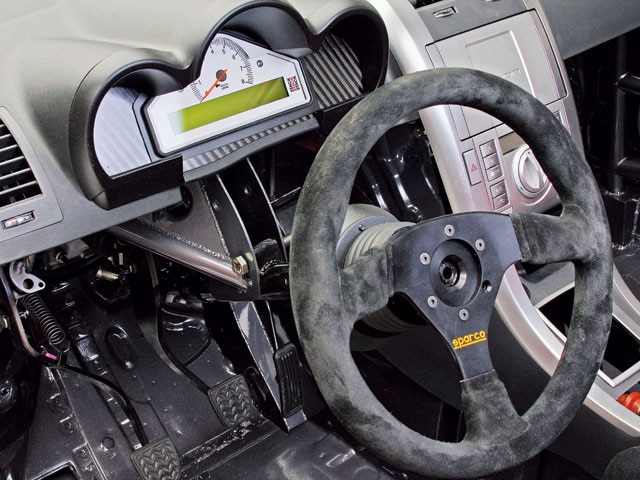 "Naturally, the first question that pops into your mind is, `Hold up, this is a front-wheel-drive car, how can it compete in Formula D?' With a little research, we found out that the tC shares its chassis origins from an all-wheel-drive vehicle not sold in the U.S. But it wasn't as easy as swapping in a sub frame, engine and transmission, and splitting the transfer case to power the rear wheels. If the S2000 was a difficult build, the tC was exponentially more complicated.

"A simple solution would have been to remove the front output shafts, diverting all the power to the rear wheels, but that can only handle so much energy before breakage. The stock transfer case wouldn't handle the power levels we needed to be competitive. Plus, we saw it as an opportunity for RS-R to showcase our experience and knowledge of making a non-driftable car drift.

By now, I,'m sure everyone is dying to know which all-wheel-drive subframe and rear end is shared with the Scion tC chassis: the Toyota Caldina. Sold exclusively in Japan, the Caldina is Toyota,'s take on a sporty wagon, but more importantly it was offered as an optional all-wheel-drive in certain trims. Using the Toyota Caldina transverse engine and drivetrain would have been relatively easy, but where,'s the fun in that? Since weight balance and distribution were key factors for the build, the decision was made to take the factory engine and drivetrain setup and run it longitudinally. We could have just chopped the firewall to make room for the engine and transmission, but it isn,'t allowed in the Formula D rulebook. Working around this posed quite a problem. It was a herculean task that Gary Castillo of Design Craft Fabrication was up for, especially since he had worked with RS-R in building the Honda S2000 years ago.

For the transmission, we went with a G-Force five-speed with a custom bell housing. The housing bolts up to the motor and is specifically designed to run a tiny 7-inch Tilton triple carbon clutch to help clear the firewall tunnel. And with the engine position changed, we had to scrap the Japanese driveshaft in favor for a new one and have new mounts fabricated.

One of the biggest questions we asked ourselves was which motor should we go with? Discussions about the proper powerplant for the tC led to weight, which then led to balance, resulting in the selection of the 3S-GE Beams motor. Stroked to a 2.2L, controlled by an AEM EMS unit, and boosted by an HKS GT3037 turbo, we estimate power at 400 hp. We,'re also running a Tom,'s dry sump kit to lower the engine as close as possible to the ground, while providing additional clearance for the transmission.

As unique as the car was going to be in the drifting world, we knew we couldn,'t go with a run-of-the-mill body kit. With the help of KC Chow at APR Performance and a widebody kit creation by an undisclosed designer, the fenders and quarter panels come out an additional 2 inches on each side, and the exhaust system exits the center of the rear bumper. The dry carbon doors, hood, roof, and trunk, were all made specifically for this project.

Suspension is obviously handled by RS-R coilovers, along with other custom pieces to help dial-in the handling characteristics of the vehicle. But suspension performance is utterly useless without a good set of wheels and tires. Toyo R1R tires are mounted on Enkei RPF1 wheels, and braking power has been significantly upgraded with Project Mu brake calipers and rotors. Now rocking a widebody stance, wheels in the front run 18x9.5 with an +18 offset on 245/40/18 tires and 18x10.5 in the rear with a +15 offset on 265/35/18 Toyos.

Interior features include a Stack display to watch the rpm, boost, oil pressure, water temperature, and fuel pressure. Sparco seats and harnesses are used to ensure driver safety, along with a Sparco shift knob and steering wheel; all of which have been custom-mounted so that the seat can be pushed back from the factory location to improve the tC,'s weight balance. Behind the driver seat is the dry sump oil tank, and behind the passenger seat is the fuel cell.

Taking a car like the Scion tC and converting it to a rear-wheel configuration may sound as simple as swapping the drivetrain, engine, and subframes, but drifting it competitively is a different story. Only time will tell how this car will do throughout the series. With Ken Gushi as our driver, and with Scion and Toyo on board, we like to think we have a damn good chance. Wish us luck and I,'ll see you at a Formula D event soon.,"

Quote
"This Scion tC was a concept two years in the making, we are proud to finally make it a reality."