2008 Nissan Altima - Another Notch In The Belt

What Is Possible With 87 Past Project Cars' Worth Of Import Building Experience. 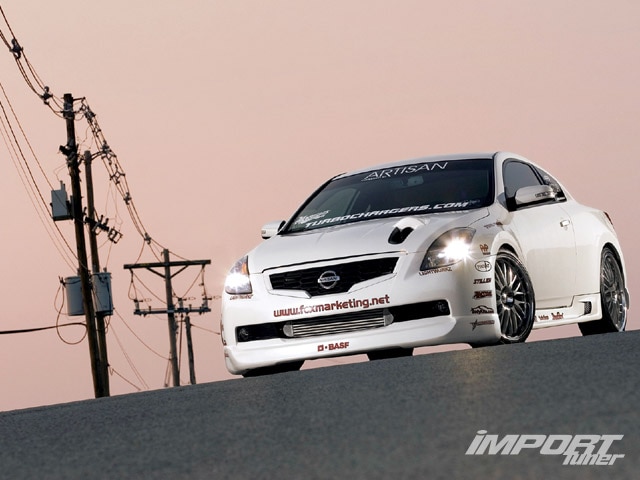 It's late on a warm July night in York, Pennsylvania-a small town just outside the capital city of Harrisburg-and I'm blasting down Interstate 80, behind the wheel of this storm trooper-esque creation. Maybe my senses are slightly dulled from the luxuries of leather-wrapped Yonaka Motorsports seating, a full Rockford Fosgate Power- and Punch-equipped system, and decreased NVH levels courtesy of Nissan's transversely mounted VQ35DE... but I'm having a hard time believing we're moving as fast as the three-digit number the Altima speedometer is climbing towards. Riding shotgun is none other than East Coast tuning icon Brain Fox, who, reading the look of cautious disbelief spread across my grille, offers one of his signature chuckles and some words of encouragement, "Go ahead dog, beat on it. She can take it," With a glance out the passenger window, he casually adds, " she does every day I drive 'er." A quick blip of the throttle matches revs to 5th gear, as the Turbonetics blow-off valve gives a hint at what's to come. I downshift and floor it. My blank stare turns into a shit-eating grin. The Artisan GTK-650 turbo spools to life, spiking the STRI boost gauge past its 12 psi mark, as a rush of more than 450 whp pushes us past the 70... 80... 90 mph marks and beyond in mere seconds. "What did I tell you?!" screams Brian, "Kenny knows his shit! ...Now let's go get some quesadillas."

In a hole-in-the-wall, mom and pop Mexican joint at the outskirts of town, some crappy tavern fare was ordered up, devoured, and quickly washed down with cervesas, as our subject of conversation gradually became the tale of Brian's newest creation; this collaborative effort between himself, Houston-based Kenny Strickler of turbochargers.com, and Nissan America. 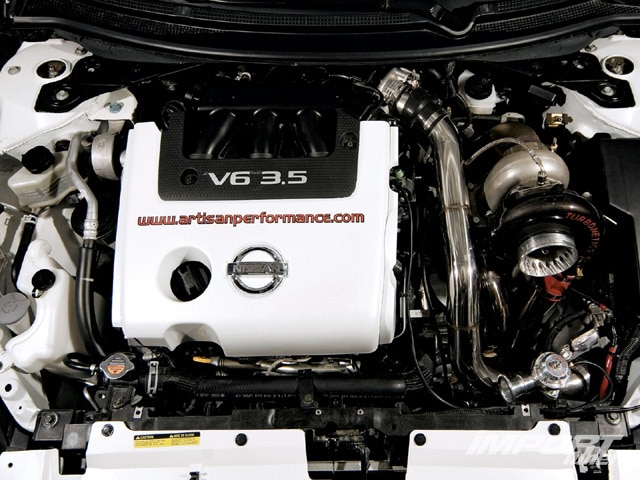 First, a little background: In the past eight years, Brian has built over 87 cars, many of them specifically for the SEMA show. Let that sink in for a moment: 87. That's about 87 times as many SEMA cars as even the luckiest few of us have been able to complete in the same amount of time. Last year's event was Brian's first time working with both Nissan and Kenny, on the world's first turbocharged Versa.

"After the success of the Versa we built for SEMA last year, Kenny, Nissan and I were looking for a new project," Brian began. "The six-speed Altima coupe had been released a few months earlier, and was predicted to sell out everywhere; Nissan couldn't even spare a "crusher" car (a company-owned test car) for us to build. Kenny wanted one so badly that he actually bought a new one-one of only three in the country at the time-at a discounted rate, and took delivery only four weeks before the show. 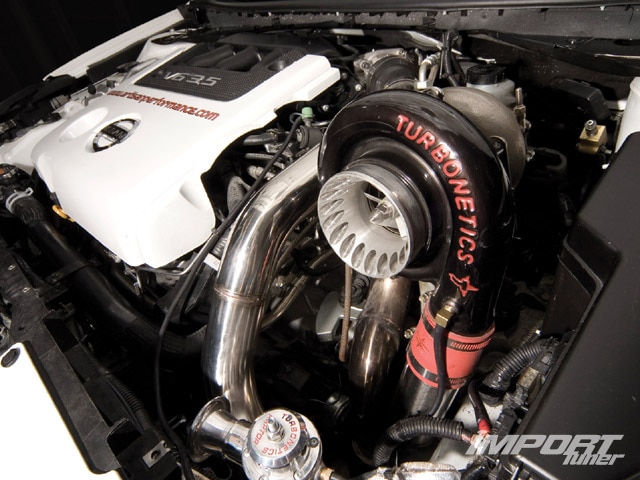 "Nothing was on the market for the car. And I mean NOTHING," he continued. "A body kit manufacturer in Cali kicked in a G35 front lip that Kenny modified to fit the Altima," Brian continued, "and I snagged a company-owned Altima coupe (the auto version) to use as a test-bed to develop new Fox Marketing/Bodykits.com side skirts and rear valence, while Kenny got started engineering the Artisan turbo kit." Supporting the aforementioned GTK-650 slug, Kenny worked an Artisan 650cc injector set, fuel rail, three-inch downpipe and exhaust, crank pulley, and battery relocation kit to the sideways-facing VQ's prototype turbo set-up, and adapted an AEM FIC to help it all run smooothly. But the attention grabber of the set-up is Kenny's one-off, hand-fabricated, equal-length turbo manifold that positions the GTK slug even with the bodyline of a custom hood - another bit constructed specifically for the vehicle. "The production Artisan kit doesn't use that manifold and hood," Brian confesses, "That's just for Kenny. And the total development time for the kit, from the drawing board to road testing? Four days."

"You can drive back," offers Brian. I ask about the underpinnings and dub-status rolling stock. "The wheels were no problem; the Altima can fit 20x8.5s all day long," he bragged, "but no one made a suspension for the car yet, and I didn't want to roll into SEMA looking like I was representing the ATL..." he continued, "so I did a little research and found out that the new Altima suspension was very close to the '02 and up Altima sedan's. I called TEIN and had them ship a set of '02 Altima springs down to Kenny in Houston, along with the '02 Altima front top hat he needed to modify to make them fit. Bam. Lower, and able to out-corner a stock 350." And what about the brakes? Puny stock calipers and rotors would look straight lame behind dubs, especially on a 450+ whp ride. "Simple," answered Brian, "I called Stillen. Done. AP Racing rotors and calipers in the mail, dog!"

As Brian explained it, the car came together without a hitch, and days before showtime, only one area was left uncovered. "The car was always white," continues Brian, "but we needed something to set it apart from the rest. I got Kenny the full BASF treatment: full R-M White Pearl inside and out, with a little BASF flat black on the hood to keep it real." No corny vinyl graphics scheme on this one. "We showed love to the sponsors, and that was it; we didn't want to cover up too much of this car. Its lines are too good. It's like a baby G35... that's good in the snow."

After the big weekend, where the Altima took JD Power and Associates' People's Choice award for "best tuner car" of the event, it was shipped up north, to remain under the watchful eye of Mr. Fox, as it parades the eastern seaboard show circuit. "But I take this thing everywhere," he boasts. "Groceries, the hardware store... I drive it to all the shows: every HIN on the east coast, the Carlisle show, Tuner Evolution... pretty much anything I can find. Everyone loves the Altima," he tells. "I was able to track 27 new Altima sales to customers who said this car inspired their decision. Some 20-year-old kid saw pics someone posted of the car on one of the forums, and he traded his new IS250 in for an Altima the next day," he continues, "Another one was a 47-year-old woman who saw it at a show and bought a red one from my local dealership the next weekend. She got the base model with steelies, so I'm going to give her my factory wheels..."

Hearing him continue to talk up the car into the wee hours of the morning, it was easy to understand how much the car had grown on him. The man's built 87 cars, and has a mild to moderate case of ADD [Understatement of the year- Carter]; I've never heard him talk at such length on any of his past projects-let alone on any one topic in particular. Back at his shop, as I climbed into my rental and uploaded directions to the airport, I queried the future of the car. Brian's usual boisterous, confident tone changed. Gone was his characteristic, friendly braggadocio. In a quiet, slightly desperate tone, he replied, "It's going back to Houston next week."

Head to the message boards at www.importtuner.com to chat about this feature vehicle

2008 Nissan Altima - Another Notch In The Belt
Photo /

Import Tuner
That Acura NSX that Made a Cameo in Travis Scott's Music Video
Anthony Valenzuela's NSX may only have a short cameo in the "Gang Gang" music video, but being recognized by 1 of today's biggest hip-hop stars is no small feat, and we gotta give props where props are due.
Sam Du – Jul 1, 2020

Import Tuner
1990 Mazda Miata Doubles Horsepower With Turbo NB2 Engine Swap
This MX-5 may have started off as a simple daily to light up some backroads with friends, but over the years it has grown into a quality custom build that looks as good as it goes.
Rushton Skinner – Jun 30, 2020

Import Tuner
Boxy-Cute: Super Street's 10 Most Popular Datsun 510
Coming in four- and two-door sedan, two-door coupe and five-door wagon versions, there are lots of ways to go with a 510 project, as we learned putting together this list of the most-visited Datsun 510 stories
Bob Hernandez – Jun 29, 2020

Import Tuner
2020 Subaru Legacy Features Lexus-Like Interior, Tesla-Style Touchscreen & A Turbocharged Boxer Destined For The Toyota GR86
The 2020 Legacy may not entice most of you away from a WRX, but it does have some interesting talking points that will make you want to take a closer look at it.
Sam Du – Jun 29, 2020 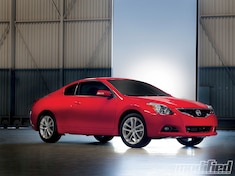 The new 2010 Nissan Altima V-6 Coupe is a good-looking car with the front end of the sporty two-door shares an unmistakable resemblance to the rest of the Nissan/Infiniti family tree. - Modified Magazine

Check out the latest automotive industry news in this 411 article from Import Tuner Magazine.

Check out Stillen's Ultimate Nissan Altima, brought to you exclusively by the experts at Turbo Magazine.

1993 Nissan Altima - Against All Odds

Read all about a custom 1995 Nissan Altima, brought to you exclusively by the experts at Euro Tuner Magazine.