An import for the very important

Not everyone wants to kit out a Civic with a spine-jarring suspension and a bolt-on turbo. And how often is the sentence "Oh goody, another import with a carbon fiber hood" uttered? The room to do something different, the freedom to go off in another direction-this is what makes the tuning world such a broad church.

Granted, the '01 Lexus GS300 featured here is far from the only build of its kind in the country, but VIP is a style that's still gaining traction on this side of the Pacific. And it's bringing an air of class with it. This car belongs to Kevin Peverill, a Southern Californian with a maturity that belies his tender age of 23. He's a quality assurance analyst for Autofashion, a fabrication and tuning shop in San Diego. And no, we have no idea what a quality assurance analyst does all day, either.

The idea behind this build was to show off some of Autofashion's skills in the operation's early days. And a stripped-down Honda wouldn't have cut it. The project started in 2005 and was ready for the SEMA show within two months. "Ever since then," says Peverill, "I haven't stopped modifying it and it's changed every year."

Let's backtrack just a touch to phase one. That was when it involved an Air Runner suspension with KYB dampers, Daizen front and rear anti-roll bars, a Cusco front strut brace, a brush with negative camber, and a much closer relationship with the ground. Also factor in the first of three body kits and its first set of wheels.

Phase two took in the Procharger supercharger and its attendant paraphernalia, like the HKS blow-off valve and pulley. Oh, and a different set of wheels.

Chapter three was marked by a swanky audio/visual system that deploys Sony monitors along with Memphis Car Audio speakers, a 12-inch subwoofer, and wiring. Plus, naturally, a change of wheels.

Episode four was when Peverill finally settled on a body kit, the majority of which is Aimgain Cygnus (front and rear bumpers, plus side skirts) and Artisan Spirits fenders (pulled to accommodate the wheels). Those vents in the hood are from Mercedes-Benz and the three-piece rear wing is a product of Junction Produce. A set of Autofashion's own puddle lights joined the throng and it was then that the body color was finalized. Any changes to the car wouldn't be complete by now without swapping the wheels. Again.

And so, four and a half years later, we come to the fifth and what might be the final stage. New wheels, obviously. Right now, they are Weds Kranze Vishnu 19-inchers, 9.5 inches wide up front, 10.5 inches wide out back, and each with a -5mm offset. Stretched over them are Falken FK452 ultra-high-performance radials sized 225/35 and 235/55, front and back respectively. Sitting behind that combo are Project Mu brakes (not the first system to go in-how surprising is that?) with six-piston calipers at the sharp end and four-piston counterparts bringing up the rear.

Affairs in the engine bay have been resolved by installing various cool bits, like the Koyo aluminum radiator, Earl's oil cooler, and an Apex'i overflow tank. The devilish details include an Autofashion air intake, HKS cam gears, an Aimgain exhaust with Toyomoto headers, and a custom dip process for the valve cover.

Not only has it taken time to get to this point, it's taken serious effort as well. "Being 'flush' means everything to a VIP car," says Peverill. "It took a lot of patience and research to make sure we did everything right." Then there's the thorny issue of moolah. Peverill has sunk about $30,000 into the car, but feels that's money well spent. "Don't be cheap. Take pride in your car," he says. "If you buy the cheap stuff-the knock-off stuff-it just rubs people the wrong way."

Nowhere is this philosophy more evident than in the sumptuous, leather-swathed cabin. The front seats are Recaro Specialists (size M), renowned for their ergonomics. Note the Garson neck pads on each. The rear seats are a custom creation by Autofashion. The showy Garson brand is also represented by the obligatory VIP black curtains, shift knob, a VIP front table, and deep-pile carpets. And those aren't nunchaku dangling from the rear-view mirror, but a Garson Mink Crystal chain.

Peverill's is an approach that's appreciated by show judges. The car has been a repeat winner and placer in many Hot Import Nights and Spocom events. "I've learned a lot and gained a lot," says Peverill. "Most of all, patience. Waiting for the parts, the late-night efforts into getting this done. I won't forget any of it when I do another project." Another project? "I have some ideas, but I'd rather keep them secret for the time being."

Build Time.
Four and a half years

Quote.
"My older brother used to take me to car shows. That's where my passion started."

"A lot of us would be confused without the guidance of Freddie Fernandez," says Kevin Peverill, who cites Freddie as his main influence. Both were involved with Autofashion, the operation (along with Elroy Paule, the third musketeer, as it were) responsible for getting this featured GS into the shape it is today.

It was established in November 2003, because each of the three founders shared a vision of the ideal shop, and none of them knew of such a place already in existence. The company sells a lot of high-end Japanese gear from its 2,424-square foot facility, specializing in the VIP style. "We're kind of a boutique," says Freddie. "We only import authentic parts. No copies."

And don't think they only build large-body J-rides. In conjunction with Ford and Falken Tire, Autofashion created a Flex that had a "Lowrider" air suspension but also a PlayStation 3, mixing elements of old and new. It won the Special Recognition Award for Outstanding Achievement in Design at the 2009 SEMA show (with such a long name, the award probably took up most of the Flex's cabin space), not to mention our Suzuki Kizashi with which you'll soon be familiar.

In the Autofashion workshop at the moment is a Lexus LS460 and a right-hand-drive Toyota Crown. Keep an eye out for something on those. For the future, Freddie wants to "move forward to keep the scene going." Freddie, long may you run. 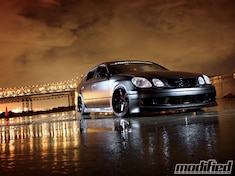