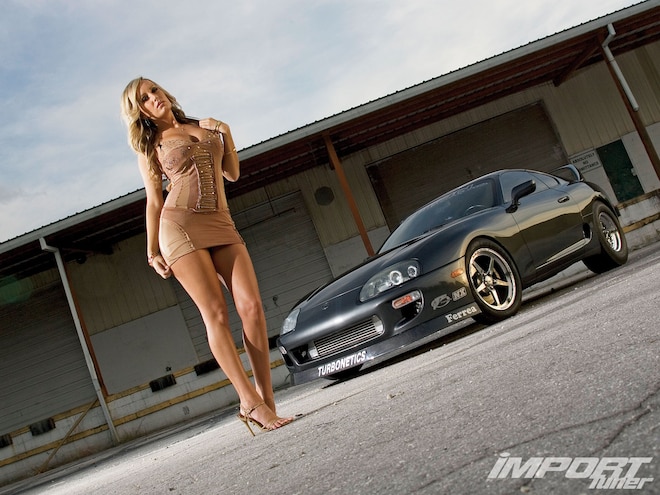 Deru kugi wa utareru. Loosely translated, it means, "The nail that sticks up gets hammered down," meaning that society will tame its rebels. I've never been a fan of this one. In the natural world it's very true; separate yourself from the herd, and you probably won't last long. But society is different. A standout persona and original thought can be the perfect recipe for success, so long as you don't mind a little risk-taking along the way. The owner of this 1000+whp street Supra-Jessica Barton, the model posing in front of it-has stood taller than most within our scene for what her and her rebellious ways have achieved over the years. A pretty hard nail, if you ask us, and nothing's knocked her down yet. 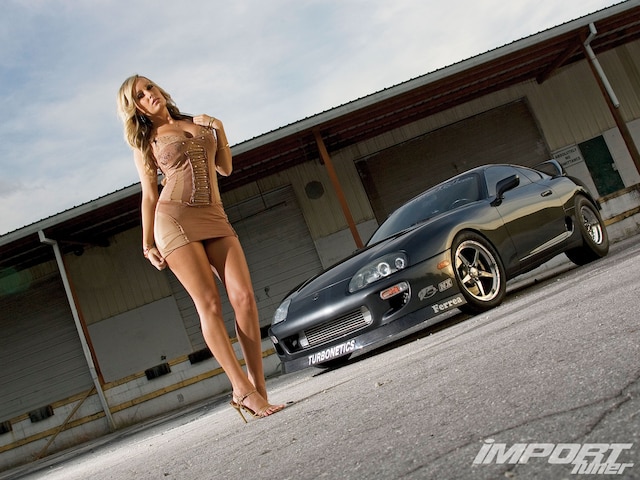 Amidst a schedule full of racing the near-8-second Supra she's built over the years, running the new Double D Tuning effort founded by her and longtime partner Darin Dichiara, and modeling literally across the globe, most people would scarcely have time to spare for friends and fans. But that's part of why we like Jess so much. Beneath her beauty and behind her accomplishments is a regular girl who likes to take life fast. Let's have her elaborate:

Most people know me today from modeling, but that was the furthest thing from my mind growing up. I was the punk girl with two-toned hair working at the skatepark-definitely not your typical girly girl. When I was about 17, I started hanging out with car clubs and going to the drags with my brother. He was the go-to car guy back then, so I grew up around the fastest cars. I remember one kind in particular-they were fast, sexy, and sounded awesome. I knew I had to have one, but was stuck with a '97 Accord. I worked odd jobs and talked my granddad into lending me some money, and a year later I bought my first Supra: an Anthracite '93 twin-turbo. My mom and I picked it up from Texas and drove it back, and I remember getting into so many races on the way. We both loved the car from the beginning!

I had an intake, downpipe, exhaust, and blow-off valve ordered before I bought the car. We upgraded it some more and tuned it within the first few days I owned it. I was hooked. I drove it daily at about 500 whp for almost two years, and went to the strip every Wednesday and Friday night the whole time.

I posted up a few shots of me with the car on my Cardomain page and that's when the modeling really started to take off. Over the next few years I modeled for all the big import magazines, did the NOPI tour and hosted NDRA Race Wars and NHRA Sport Compact events, modeled for import industry companies in Puerto Rico, Hungary, and elsewhere overseas, and raced and did bikini contests at some of those events and others the whole time. 911 EnergyDrink in the Dominican Republic built and wrapped a six-speed Supra for me to race at an event down there while I was modeling, and Puerto Rico-from hosting Super Street Car Shootouts down there to watching Sporty Dyno run their three dynos all day long until 4 a.m.-was always awesome.

Success may be measured by how much one accomplishes, but respect comes with how hard they have to fight for it. Life tosses each of us some unexpected curveballs every now and then, including Jess. It just so happens she's got a knack for hitting them out of the park.

About three and a half years after buying it, a boyfriend and I were driving my Supra to my house one evening when some lady ran a red light and totaled it. Insurance companies screwed me around for a while-they didn't want to classify a car like that as "upgraded" back then-but it all worked out in the end. I saved some money, got a good deal on another Supra from a customer of Titan Motorsports, and swapped over my old car's black interior and six-speed transmission, had a cage fabricated, had it painted Aston Martin Meteorite Silver inside and out, and built a new engine setup to about 800 whp.

The initial build took only eight months, but Darin and I have changed it a lot since then. Most notably the switch from 116-octane leaded race fuel to E85 ethanol pump gas. The difference is night and day. E85 runs cooler, decreases turbo lag a lot, and is way cheaper than 116-not to mention it's street legal. Switching to Motec engine management was another big improvement. It does everything better and more reliably than any other system I've ever used, and the tuning options are almost limitless. I was stuck running 10.7-second e.t.'s with a different system, and as soon as we switched to the Motec, I started running 9s. And I'm not just putting in a good word for a sponsor-we paid full price for it.

Another big part of the system is the Jessica 76 turbo that Turbonetics worked with us to develop. It made 1,031 whp on my car without nitrous-the most power produced by a 76mm turbocharger. With a Nitrous Express single fogger system, I've run as fast as 9.04 @ 162. Suspension tuning was also a big issue. With heavy, high-horsepower, manually shifted RWD street cars, front-to-rear weight transfer between shifts becomes a big factor-especially when racing on slicks at the track. HKS drag launch coilovers were created specifically for this reason, to keep the car's rear wheels planted as much as possible. And they worked really well, but have been discontinued. Darin and I added custom-spec springs, and worked with Penske to custom-valve a set of their dampers that work really well for drag racing, all while saving some money in the process.

Building the driveline right was also a big factor. There are two ways to run faster: increase traction and cut time at the line, or increase power and cut time top-end. Supras have the strongest independent rear suspensions out there, but they still break with a lot of power and traction. Darin and I decided to stick with 15x10.5 ET Drag (stiff) slicks at the track instead of taller and wider wrinkle-walls some other guys are running, for improved reliability. I still drive the car to and from the track, and getting stranded out there isn't fun-or cheap!

I've put four years and nearly 70K miles on the new car. I won my class in the drag race, got Second on the dyno, and won the bikini contest at last year's TX2K10 event. I race Battle of the Imports when it comes around, which I've won two years in a row. Darin and I both raced the last one in our own cars. I qualified mid-pack and made it all the way to the Finals-and so did he. His car was a lot faster than mine, so I treed the crap out of him at the line, cut a faster light, and beat his 8.9-second pass with a 9.21. The crowd went crazy and the trophy I won is still the biggest one on our mantle. I love it!

After all her accomplishments, Jess seems to have developed an addiction for raising the bar in everything she does-even if she'd set it herself. Despite running times quicker and faster, and seeing more of the world along the way than most of us ever will, She's looking for more from the future. Something tells us she'll get it, too.

I still haven't gotten that elusive 8-second pass I've been trying for for two years, so we're changing up the Supra a lot right now. We're cutting about 100 pounds by adding new Strange brakes all around, converting the single-fogger NX setup to direct-port, working on a new turbo, and Darin's retuning it all to bring out some hidden power. My goals are to get solidly in the 8s, and race and model as much as possible next year, while helping Darin build our business even bigger. It's a lot to do, but it's all connected. I work a ton of outlaw races all over the U.S., like PSCA, Shake Down at E-Town, World Street Nationals, etc. I also work a ton for the Las Vegas Motor Speedway and you can always see me working events and shows for my sponsors as well. I've seen a lot of big-name show and race series leave the scene on bad terms-I think you know which ones I'm talking about-and that's kept some much-needed sponsor money out. But the events and series today are getting stronger and more professional, and if the racers continue to conduct themselves more professionally and race more reliably, potential sponsors will notice and good things will happen again. We're invested in this scene because we love it. This is my life and I plan to be around, living it to the fullest, for as long as I can!

Gratitude My boyfriend Darin Dichiara for all the hard work and inspiration; Turbonetics for developing the awesome turbo; JE Pistons; Nitrous Express; Ferrea