Turbocharged, JDM, cleaner than the day it was made. And that’s only part of this DIY RSX Type-S story. 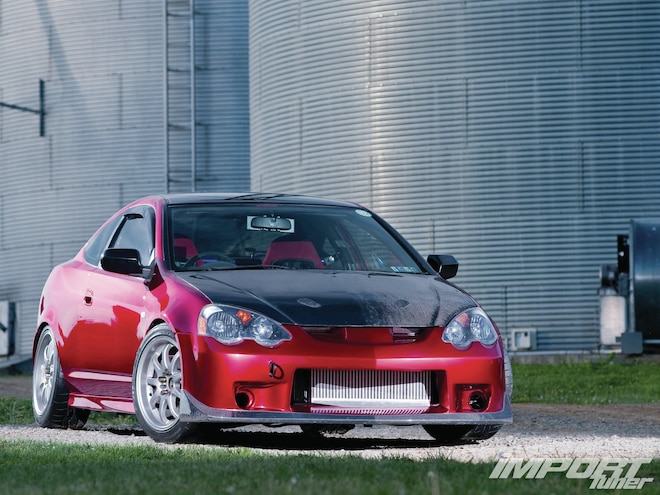 As writers of the world’s leading import automotive authority–one dedicated to representing a wide variety of the tuning spectrum–we sometimes struggle to write about the cars we know you like, but we don’t necessarily like ourselves (we’re sure you can guess which ones we’re alluding to). Other times, the stories write themselves. Take this JDM Integra Type R-converted, Full-Race-powered, flawlessly candy-clad RSX Type-S, for example. One of the cleanest DC5s we’ve seen, the kicker was that the car was a full-on reconstruction of a totaled chassis. And the story just got better once we learned that the owner built the car entirely with his own two hands, from start to finish, in one half of a two-car garage in a residential neighborhood in the middle-of-nowhere, PA. We’re betting even the Nissan heads are still reading this. 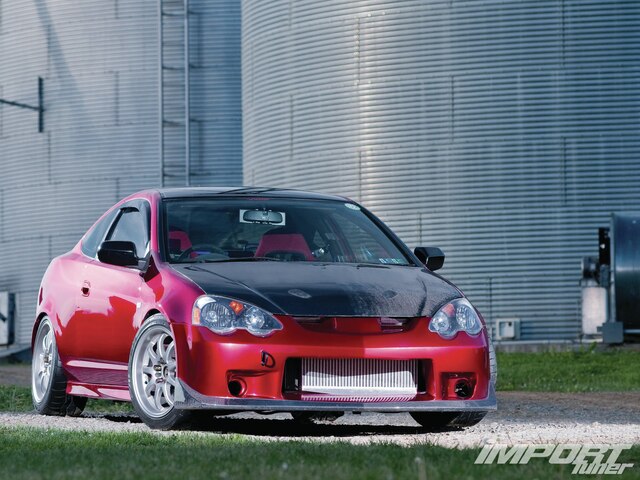 "I was 17, just wrecked my first car, and was looking for another project when I found this totaled RSX Type-S for dirt cheap on eBay," Josh Croll told us within the first few minutes of our conversation. When we asked what sane parents would allow their 17-year-old kid to auction off all his money on a wrecked car to (hopefully) stuff in their garage along with a grip of parts to make it go fast, he clarified: "My dad owned his own body shop back when I was little. I used to mess around and help him as far back as I can remember. Building cars is just what we’ve always done."

Josh’s first car was a ’97 Impreza he and his dad restored to factory condition when Josh was 14. Chosen for the safety of AWD in cold, snowy Northeast winters, Josh was quick to discover the car’s side benefits of monster handling and performance tunability via the burgeoning aftermarket. "By the time I was 17, the car was completely riced out," he laughs. "But it was fast." Maybe too fast. It met its demise one winter evening when even AWD couldn’t overcome a patch of black ice around a bad bend. What was left was parted out and the money rolled over into the subject at hand.

"It was a mess when I first got it," he says. "I don’t know exactly how, but it got T-boned on the right and sandwiched between two cars in the front and rear." Saying the damage was extensive is an understatement. Once Josh and his pops tore into it, they found out that it had actually been reconstructed–poorly–once before. "I had to replace the radiator support, right front framerail, right uni-side assembly, right door jamb, and right rear quarter-panel," he tells. "And that was just so we could get it on the rack and straighten out the frame." It was piecing together the additional body components that the direction for the RSX’s conversion took shape. Josh had a tough time sourcing used parts for a new-ish, rare, RSX Type-S, until he found Elite JDM. "They had imported a wrecked JDM DC5 Integra Type R to part out," he explains. "I went there looking for a replacement door and left with pretty much the whole thing." Josh reconstructed the RSX’s front with the JDM ITR rad support, HID projector headlights, fenders, and hood, and bolted on the JDM doors (complete with JDM-only removable aluminum side impact bracing), hubs, and control arms (including JDM-only aluminum front lower control arms), and later, ditched the RSX’s sunroof for a solid sheetmetal skin only the JDM ITRs came with. He also sourced additional components–like the OEM tinted rear and side glass, rear wiper, carbon-fiber door speakers, and Gathers navigation–from a C-package JDM Integra chassis.

Josh’s unique blend of Back Yard Special/Mugen/Seibon aftermarket schwag trickled in as he focused more on the interior, replacing the dash, center console, carpeting, door inserts, gauge cluster, shift knob, pedals, and roof liner with JDM DC5 Integra Type R alternatives, and added aftermarket bits where necessary to produce a clean, JDM look not seen in his area. "I think I was the first to do the JDM roof and roof liner, nav, and most of the C-package stuff in the States," he says. And then there’s that fuel cell: clean, flush-mounted, and color-matched. We’ve never seen anything quite like it. "I wanted to get away from all the audio and custom enclosures I see at shows," he says, "but still have something going on in the trunk." We couldn’t think of a better way to do it.

The car’s deep red hue became a more detailed procedure than one might expect. "I started by spraying a couple thick coats of sealer," begins Josh, "blocked it down, then sprayed the Cosmic Dust metallic basecoat, blocked that down, then sprayed a few coats of the Candy Raspberry clear, blocked it down again, sprayed a few more coats and finished with the wet sanding and buffing." The result: like glass.

But it’s the engine bay that really shines. With the RSX’s 30K-mile Type-S powerplant yanked to be fitted with the complete Full-Race turbo kit it flexes now, Josh welded shut every hole in the bay and smoothed over every inconsistency he could find. With the newly boosted K20A back in its color-matched home, a full wire tuck and ultra-sleek braided black nylon vacuum, coolant, and fuel hoses give its new-school take on a timeless tradition that harkens to Josh’s hot-rod heritage. "The only thing I didn’t do on the car was the tuning," he confesses. "Vince at RT Tuning actually tuned it to make over 400 whp before backing boost off for daily driving–plenty fast enough for me. So far."

Possibly the best part of the story of Josh and his RSX is that it’s ongoing, and will be for as long as he can see. "Building the car taught me the right and wrong ways to do it," he says. "I learned a lot of stuff I thought I already knew, and really developed an understanding of how to bring a project to life." He’s since opened a body shop of his own–Croll’s Customs–with this RSX serving as its rolling billboard. "I’ll never sell it," he vows. "I’ll buy a house, dedicate garage space to it–all that stuff."

Motivation.
To showcase my talents and passion for custom cars

Gratitude Thank you to my parents for the garage space and putting up with thousands of parts in their basement; my friends Zach special helper Dolly, Steve Souza, and Justin Dierolf for the extra set of hands and motivation; Nick DAlessio and Anthony Cruz at Elite JDM in Philadelphia for the clip and tons of parts.