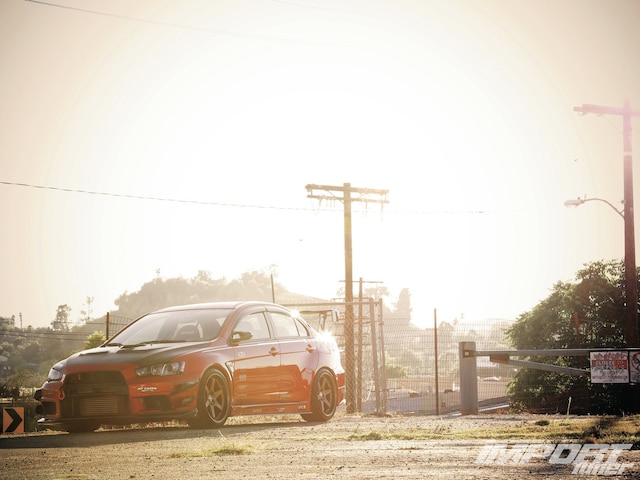 I think it is safe to say that most of us enjoy a good cover song, Vegas act, or maybe even some wannabe superheroes brawling on the street corner. It is said that imitation is the sincerest form of flattery, although, I’m not quite sure if Bruce Wayne would be very proud of Phoenix Jones and the like. In this instance, we have here not an overweight burnt-out “Elvis” found on the street corner, but the Cirque du Soleil of the strip. Meet Albert Sanchez and his rendition of the stunning Varis Mitsubishi EVO X. One of many cars Albert has built, this one takes the cake, displaying what most other CZ4A owners (’08-present Mitsubishi EVO chassis production) recognize as the most gracious, yet deadly Rally Red EVO to hit the SoCal streets and tracks. You see, Albert stumbled upon the great beauty in another Japanese publication and before any other Stateside tuner could blink, he had pulled the trigger on the Varis full-suite exterior treatment.

What better new body chassis to re-create here in the United States, but with a bit of the flair our show scene demands, Albert took his EVO to the next echelon. With a couple other builds for fair comparison it’s clearly the best choice in vehicle. “Even fully built and tuned, the WRX seemed unresponsive and front heavy,” Albert says, the EVO did not last but a month before some big purchases were made with some high-end importers. This starts the beginning of an epic build you simply cannot miss.

There are certainly many ways of making sure a car goes fast on the circuit, but suspension is undeniably a key component. EDO performance was called upon for the new breakthrough Japanese tuner, M7. Allowing the EVO to better negotiate turns and get a closer look at the tarmac, M7 fully adjustable dampers were bolted to the chassis. M7 adjustable camber plates were installed, so that proper suspension tuning is available at any time. Gripping ever so tightly to the towers, HKS Kansai service with their beautifully handcrafted titanium strut bars, weighing in at featherweight classing of 2.4 pounds apiece, secured both front and rear. In proper fashion to the CZ fenders, 19x10.5 +22 Bronze Volk TE37s were wrapped in manly 275/30-19 Continental Extreme Contact DW rubber. Although the car seen here isn’t quite the sub 58-second Tsukuba-raping beast of Japan, he still needs the braking power close to that of its inspiration. He added Rotora cross-drilled and slotted rotors that are bitten hard thanks to Project Mu B-force brake pads. Goodridge aids in proper pedal pressure and no line expansion when needed most; stopping a car of this weight isn’t always the easiest task when reaching the 4B11’s power levels.

Forced Performance is the preferred turbo choice for many EVO owners and for a very obvious reason: FP takes an OEM unit and simply makes everything bigger and better. The FP Red turbo offers a great mix of midrange and peak power Albert needs, while allowing all four tires maximum grip for the holeshot on local rice. DW 800cc injectors help propel the hot gases the turbine creates right through the M7 Ti-tipped cat-back exhaust. John at Cobb Tuning is responsible for stimulating the 2.0-liter to a healthy, yet deadly, 381 whp and 343 lb-ft of torque. At the time Albert had the car equipped with an Ichiba DP, but it’s been replaced with a high-power AMS widemouth DP. Intake air temps are held to a minimum in result of the Perrin IC and piping. The robust power of the MIVEC engine is fed by the elegant Gruppe M CF intake duct to M7 IC coupling and finished off with the engine specialist’s own Tomei titanium upper IC pipe. Unnecessary turbo air is exhausted via an HKS SSQV. Accenting throughout the bay can be found with the likes of Carbing tanks and M7 oil filter cap.

The Varis pieces are of such a high caliber that they required zero modification, and fitment was that of OEM.

Moving right along to the cabin lies the very well-dressed homemade Bride suede-wrapped interior. Bride Stradia IIs sit pretty within the matching gradation print door panels, ceiling, armrest, and even back seats. Keep in mind, Albert successfully completed this interior project himself. “I like things to be done the best, to perfection, and to do that I did it myself,” he says. This GSR’s five-speed transmission is topped off with even more titanium; ARC comes to mind when gears need changing. No lack of quality found here either; a bit of Italian love is gripped with a Personal Neo Grinta steering wheel bolted to a Works Bell quick release and WB Splash short hub to ensure proper seating position. All four points are here with Takata four-point harnesses. For the sake of keeping the car to a practical street application, Rockford Fosgate surrounds the perimeter of the interior, finishing off the sounds as cleanly as possible.

Driveline Motoring helped give birth to the stunning street sweeper you see today. After a 10-month wait, Albert had Varis refrigerator-sized boxes arriving dockside. Showstoppers USA was able to help source a very rare and desirable full CF Euro-spec Varis GT wing for ultimate downforce. In Albert’s garage a friend’s uncle (Newcentury Auto) found himself assisting in the installation of the CF front lip, side skirt, fender garnishes, and dive planes. The Varis pieces are of such a high caliber that they required zero modification, and fitment was that of OEM. Pretty impressive—you will not find that in most aftermarket aero. Ganador mirrors butt up nicely alongside the pillar, accentuating the profile that much more and always a nice choice in visibility products. The time-attack theme is retained that much more thanks to the Seibon matte finish CF bonnet and boot. Greatly lowering undercar pressure and increasing stability, a Seibon CF rear diffuser was affixed to the bumper.

Even fully built and tuned, the WRX seemed unresponsive and front heavy.

There is not much left for Albert to do to this immaculate street beast. His plan is to enjoy what greatness is already there, but wouldn’t mind beefing up the internals for a bigger up in power. It’s been nearly three years of consistent upgrading, and I imagine that will continue again shortly. Hitting some more track events and gathering feedback from the car will ensue that need. Just like the Varis EVO of Japan, Albert has this vehicle registered and street driven on a consistent basis. Clearly, buying the right parts and completing modifications right the first time pay off well. Albert, thanks for the inspiration.

Motivation.
“I really love the Varis EVO X in Japan; since I couldn’t import it here, I decided to build my own.” 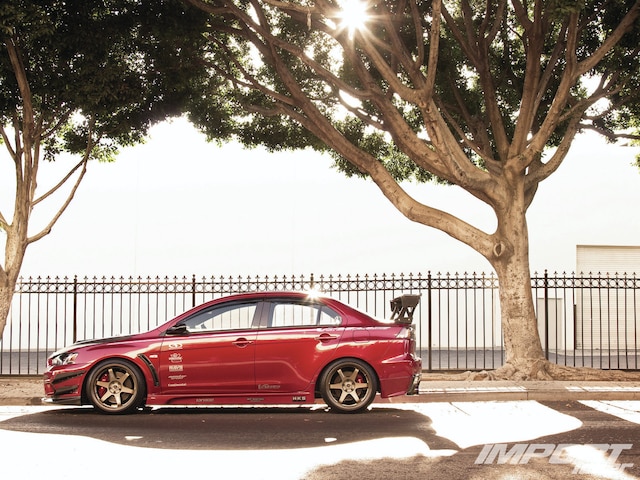