Don’t panic, you read that correctly. 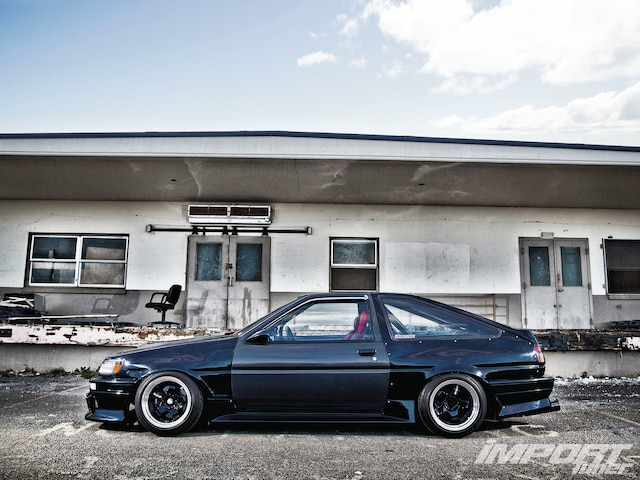 We are going to take a departure from the norm today. It’s good to try something new every now and then, so sit back and try to take what you’re about to read in context. When we stumbled upon this beauty in Waipahu, HI, a while back, we knew that we had to have it. It’s an amazingly well-thought-out AE86 build that almost any enthusiast can appreciate. As you can tell from just glancing over the photos, there isn’t a stone that’s been left unturned. It has the aggressive styling that we love to see out of these older Toyotas; the motor definitely isn’t stock, and the way it sits on the ground just gives it some serious road presence. By all accounts, this ’86 Toyota Corolla is one of the best-built AE86s that we have ever seen—what we didn’t know, however, was that this Corolla wasn’t built by its current owner. This Hachi-Roku was purchased as is.

Before you shout obscenities and scream blasphemy, bear with us. While it isn’t your conventional backstory on how the owner cried, bled, and starved to get this Corolla to this point in its automotive existence, there is still quite an interesting tale to tell. The current owner, Efren Guillermo, has had his own share of trials and tribulations working on cars. While he didn’t piece this build together, he’s always had the AE86 chassis in his heart. Along with his brother, the duo helped to build another 8-6 and used it regularly for weekend drift sessions. That particular car was his brother’s though, so he found himself wanting one of his own. Being a loving husband and father didn’t leave him with very much time to devote to starting a whole new project though, so the only other option was to purchase one that was already complete.

“My wife was pissed!” Efren says. “I mean, she wasn’t even slightly mad; she was just completely pissed about the idea of me buying this car. She knew that I had always been into cars so it shouldn’t really have been that big of a surprise. When I first met her, she had a Civic coupe too, and we were always involved in the Maui car scene. I guess it just didn’t make sense to her to spend that kind of money on a car when I have a home and family to maintain. I saw it, though, as the best of both worlds. I could have a modified car that I could enjoy, and not have to worry about all the downtime and issues that go into building a new project. I’ve worked on enough cars in the past to know how much time needs to be invested, and I really would rather spend that time with my family.”

Did I mention that my wife was pissed?

You would imagine that Efren spent a large chunk of time searching for his perfect car, but it actually fell into his lap pretty easily. During his time with his brother in the Hawaiian Toyota enthusiast community, he met a lot of great people; one of them, in particular, was his friend and neighbor Russell “Rawsoul” Ramboa. Russell was a pretty well-known figure within their community and was known for having some pretty amazing Toyota builds. He had recently completed the Corolla that you see here, but was ready to move on (he had the itch to start on a new MKIII Supra project). The AE86 was basically in the same condition as you see it in now, other than some very minor changes. Origin Lab’s “Stylish” aero kit was installed and painted, along with the J-Blood Type 3 hood and widened fenders, and unpainted carbon-fiber doors. Giving it a very distinct look over the U.S.-market Corollas was a JDM factory Corolla Levin frontend conversion. Adding to its unique face is a Silk Road headlight intake and eight-piece eyeliner kit. Seated under the widened fenders are Greddy Type-S coilovers and aggressively sized 15-inch Work Meister S1 two-piece wheels.

“Russell wasn’t the type of guy to just build a car and get rid of it to make money. Honestly, if we all had the chance to build a MKIII Supra, we would do whatever it takes to get it. The Corolla was perfect in every way, but it still doesn’t compare to the potential of a Toyota Supra, you know? The Supra was one of the dream cars of our generation and Russell was presented with the opportunity to own one. He wanted to sell the Corolla but not just to a random person who wouldn’t appreciate it. There are people out there who would probably try to cash in on this car and part it out—I definitely wasn’t that guy.” Efren says.

Efren had already developed a deep appreciation for Russell’s work. He had watched him piece this Corolla project together for the last two years, and he too wanted to see that this project didn’t end up in the wrong hands. Word had spread around town that he was selling it, and Efren made the decision to jump on the deal. “I kept talking to my wife about buying the car, but she just wasn’t having it,” he says. “I told her that it was a great deal, and I couldn’t pass it up. He didn’t even know that I wanted to buy his car. I showed up at his door with an envelope full of money, and it caught him off guard. In fact, he was still working on it when I got there.”

Russell had just dropped a 4A-GZE engine into the AE86. A 4A-GZE, for those unfamiliar, is the newer, supercharged version of the original 4A-GE motor found in the Corolla. The GZE motor going into Efren’s future ride was once found in a Japanese domestic market AE101 Corolla. Everything was basically done when he got to Russell’s house; there were just a couple loose ends that had to be tied up. The motor had yet to be started, and it lacked an exhaust and intercooler piping. Though surprised, Russell agreed to the deal and gladly accepted the money that Efren’s wife was not happy to let go of. The Corolla spent a couple more days at its builder’s home until the motor was primed and Exhaust Systems Hawaii was able to fabricate the necessary components to finish the build.

“Did I mention that my wife was pissed?” Efren says. “She was angry even after I brought the car home. It’s understandable, though; she just didn’t like the fact that I spent the money on myself. I tell her every day that it was a good deal, so I hope one day she won’t be upset about it anymore. I know that I didn’t build this car, and I will never claim that I did. I was honestly a little reluctant to agree to this feature, but I think the world needs to see this car and appreciate the work that Russell put into it. I would like to do more to this car and change it up, but my wife and kids come first above all else. I am simply the caretaker of this Corolla in the meantime. There’s no rush to change anything on it anyway, because it’s perfect the way it is. I have the rest of my life to enjoy this car, and eventually I will switch some things up here and there. Bought, not built, but it is in good hands!”

Motivation
My first time picking up an issue of Import Tuner

Gratitude Jehovah God; my wife, son, and daughter; Russell; Al Ramiscal; my bro; Section-D; Sean F at Munky Works Garage; Exhaust Systems Hawaii; all of the Hawaii Toyota enthusiasts; Hachi Outlaws; and all of the AE86 owners around the world living the AE86 life!

Nakai and Nojima have once again proven they know how to build visually stunning cars, mixing an optimal blend of that Rough World trendsetting style with a more modern and contemporary Rauh Welt ideology. Check out their latest build, a 1986 Toyota Levin.