After a few bumps in the road, Chris Bishop’s living life in the fast lane. 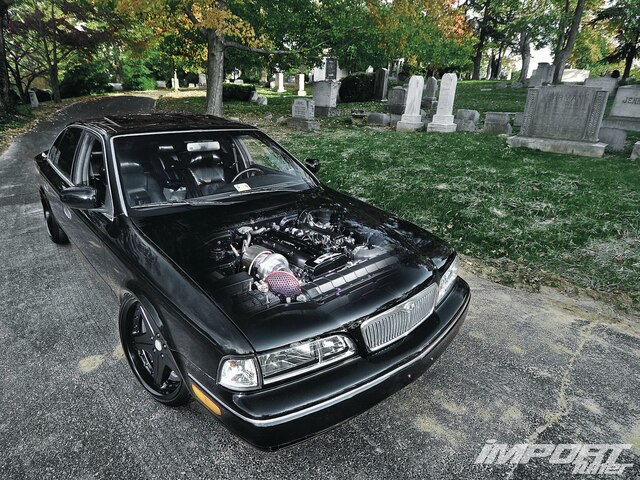 What should have been a short jog turned into a hurdle race. Chris Bishop of Richmond started a business and set out to build a one-of-a-kind VIP car to showcase the products that his company offered. That was the motivation behind this build and although it sounds simple enough, some things are easier said than done. This project would truly exemplify that old saying.

At a young age, Chris developed not only a love for cars but also a love for working on them. “My father was a huge influence . . . I was in the garage helping him work on his restoration projects since I can remember,” he says. Since then, Chris has owned a whole heck of a lot of cars—an S15 Nissan Silvia, every 240SX chassis (minus the convertible), a 2JZ-swapped 300ZX, an ’01 Infiniti Q45, a Lexus GS300, a ’96 Toyota Soarer, a ’73 Mercedes-Benz 280, and a ’66 Datsun Roadster 1600—to name just a few of the 50 or so he’s had in his possession at one time or another. This love for all things car-related coupled with a business-oriented mind led Chris to start Dressupbolts.com, a company designed to specialize in providing the most complete automotive fastener replacement kits on the market today. And what better way to show the world what your company has to offer than by building a car that utilizes those products? So he did just that, deciding on the ever-so-popular VIP theme to do it.

As more and more VIP builds come out every year, the proverbial envelope keeps getting pushed further and further. Body kits, insane wheel sizing and fitment (or lack thereof), and interior accessories made from anything ranging from wood to crystal are essentially the norm these days. But Chris had already developed the picture of what this stage of his build would look like, and he went more for simplicity and subtlety to be the cornerstones of the vehicle’s presence at this time. Additionally, he opted to use a relatively unorthodox chassis. Lexus chassis dominate the VIP scene here Stateside, but Chris not only chose an Infiniti Q45, he chose the least popular of its iterations—the first-generation G50. “I’ve always had a love for G50s. It’s usually one of those chassis that people either love or hate,” he says. “I have always loved it. I prefer Infiniti’s low roof line and wide stance over Lexus’ taller and narrower lines.”

Ranging from small to large, the hurdles began for Chris right from the beginning. And not just with the modifications and aftermarket parts, instead it was the chassis itself. After searching for and finding a stock vehicle that looked to be in good shape, the purchase was made and the teardown began. It just so happened that the previous owner neglected to mention that the vehicle had been in a front end accident at some point and, whether he knew or it or not, the repair work that had been done was far less than perfect. For some this would have been an unacceptable factor, but Chris had a plan and didn’t allow the discovery to deter him from proceeding. The guys at Unique Motors were responsible for fixing the shoddily repaired core support and repaint the engine bay in preparation for the heart transplant the vehicle would experience.

I was in the garage helping [my father] work on his restoration projects since I can remember.

Next came the heart and soul of the build: the engine and engine bay. Chris had decided from the get-go that he was going to swap in the beloved 2JZ-GTE, so he contacted the guys at J-Spec Auto in nearby Ashland, VA, to source the Toyota Aristo powerplant. Now that the motor was in his possession, Chris purchased the upgrades needed to achieve as much power as he could without putting the automatic transmission at too much risk. A Precision 67mm turbo with polished compressor housing, Tial wastegate and blow-off valve, and a Greddy intercooler were chosen. Fuel needs were being taken care of by a combination of a twin-turbo 300ZX fuel pump and a U.S.-spec twin-turbo Supra fuel rail and 550cc injectors. Chris then contacted Ben at Freed Engineering to tackle some of the most technically difficult aspects of the build. A custom set of motor mounts was needed to nestle the motor into the Infiniti’s bay, with special care needed in the fabrication of the transmission mount (its angle needed to be spot on for the driveshaft to line up and work perfectly). Additionally, Ben handled all of the necessary wiring needed to get the mixture of Toyota and Nissan parts to work in congruence with one another. Chris then finalized the beautiful underhood setup with his company’s full Q45 Titanium Engine Bay Bolt Kit as well as for the 2JZ-GTE.

With the motor and technical aspects addressed, the time came to choose what suspension setup would provide the stance Chris was looking for as well as what wheels the car would sit on. Chris chose an air suspension setup by former One Ton Garage and had them modify it to sit as low as possible, as well as have only ½ inch of fender gap when aired all the way up. Chris then took a set of 19-inch Work Euroline SL wheels and had the faces and lips powdercoated in black and then reassembled, replacing all of the original bolts with Dressupbolts.com Signature Series gold and purple titanium fasteners.

There would be just one more hurdle that Chris would have to clear, and this one turned out to be a doozy. Chris noticed that vehicle’s original radiator needed some TLC, so he had it cleaned up and reused it. Unfortunately, he experienced cooling problems, so Chris took a spare OEM radiator he had and put that in. The spare turned out to be bad too, as the cooling issues continued. Since no one made a Q45-specific aftermarket radiator, Chris took a Supra application Mishimoto radiator and created the necessary brackets and hoses. Everything seemed to be perfect at that point, and Chris thought he was on the homestretch, but he was unaware that the core was touching the A/C condenser fitting. The next thing he knew it had rubbed a hole in to the core, rendering the third radiator useless. Finally, a new Mishimoto radiator was put in place properly, correcting the problem and finalizing the swap. When it was all said and done Chris called his friend Mike Poore, and they headed out to Atlantic Motorsports in Maryland to tune the setup, making a rock-solid 449 whp and 421 lb-ft of torque.

With a 2JZ-powered, murdered-out Q sitting on customized 19-inch Work wheels, many people would be more than satisfied—not Chris. “Stage one of the build is now complete. Stage two will include an exterior makeover with Japanese aero, radiused fenders, new wheels, and new paint.” There goes simplicity and subtlety, and we can’t wait to see it.

Gratitude The staff at Dressupbolts.com for all of your hard work; Been Freed at Freed Engineering; Sam and Wali at J-Spec Auto Sports for the great engine; Terry at Fortune Auto; Corey at AMS in Maryland

Import Tuner
Toyota GR Super Sport Hypercar Makes Surprise Debut at Le Mans
This year's 24 Hours of Le Mans was all about Toyota. The Japanese brand not only took the checkered flag but also stole the spotlight with a prototype mule of its forthcoming hypercar, the GR Super Sport.
Greg Fink – Sep 23, 2020