Can you make your car waltz around a city street or wooded backroad like Ken Block? Probably not. Of course, the inability to hold hundred-foot all-wheel-drive slides and place a front wheel within millimeters of a dock drop-off hasn't stopped tens of thousands of Gymkhana fans from imitating their rally hero, on- or off-camera. Most do so with a modified WRX or Focus ST/RS of their own, but now's a rare chance at sliding behind the wheel of Block's own Subie—all you have to do is win the auction.

Up for grabs is Block's old 2002 Subaru Impreza WRX STI (updated to 2006 exterior specs), a fully race-prepped Group N rally car built for his mid-2000s stint in Rally America. In his hands, the WRX cruised to a handful of victories, including his first-ever overall win at the 2006 Rally of the 100 Acre Wood. Unfortunately, this car pre-dates Block's first Gymkhana video and is not one of the cars that set the standard for exhibitionist rally videos. 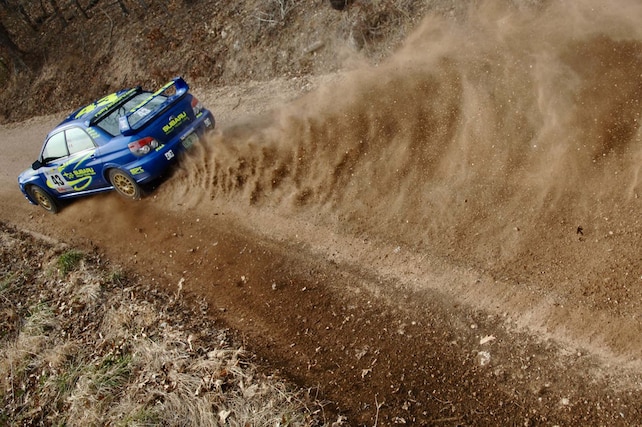 Even so, this might look familiar to Block fans beyond its success on the rally stage. Block made headlines behind the wheel of this STI when he set the world record for longest distance jump at 171 feet for Discovery Network's Stunt Junkies. The record has since been broken multiple times over, but hey—this is still a piece of motorsports history.

Even removed from its celebrity owner, this is quite a bit of vehicular kit. Built by Subaru technical partner Vermont SportsCar, this WRX STI arrives ready for more dirt-filled, mud-stained adventures, provided the winning bidder doesn't plan to make this an expensive piece of garage art. If you do plan on burning the clean right off at a local rally, you'll be pleased to know Block's team of rally mechanics prepped the car for sale with a full fluid flush, new cam belt, and a brand-new fuel cell.

Bidding is already underway, so head over to the just-launched Wall Street Motorsport auction site for more info and a chance at a piece of rallying—and internet—history.