Among the most popular sports cars of all time, the Mazda RX-7 combines natural athleticism with one of the most unique engines to ever come from a factory. 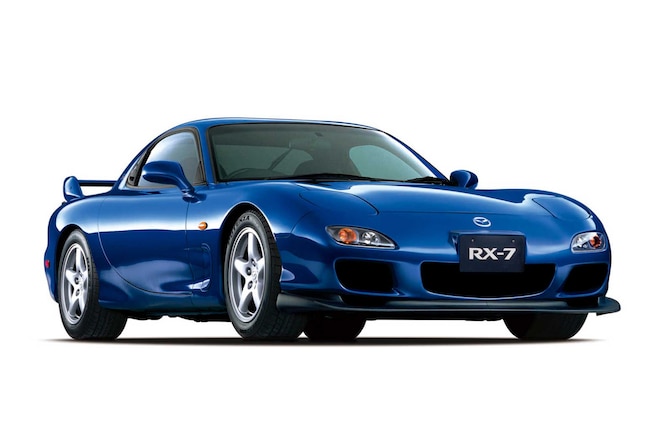 From the Editors of Super Street - When Mazda replaced the classically '80s compact-looking RX-3 with the RX-7, it sent Wankel rotary engine-powered fun on a new trajectory in automotive history. It kept the FR layout, but ultimately became a longer, leaner, and—dare we say—sexier machine, earning cult status for appearing in Initial D and the Fast & the Furious movies. The RX-7 was also hailed as a circuit hero in its first gen, giving the model all kinds of credibility among enthusiasts.

In this day and age, you're almost as likely to find a V-8 swapped under the hood of that modified second or third generation RX-7 you see out on the street as you are a 13B rotary, but there are still a lot of owners who stay true to what Mazda gave them (and a few who have gone totally off the rails with 4-rotor swaps). Indulge in some Mazda RX-7 history, facts, and specs, courtesy of our friends over at Automobile.

When the first-generation Mazda RX-7 was launched in 1978, the little Japanese two-seat sports car was something of a game-changer. Not only was it powered by an unconventional rotary engine, but it was also relatively lightweight, practical with its large rear glass hatch, and thoroughly modern. Moreover, it was affordable, which allowed more enthusiasts to get behind the wheel. Early 1978-1980 cars were given the internal designation "SA," but a 1981 model-year facelift with re-styled bumpers and rear valance, a standard five-speed manual transmission replacing the previous four-speed, and a light interior refresh revised the car enough to re-code it "FB." Brakes were disc-front, drum-rear on base 'S' models, while upmarket, fully-loaded GSL models had discs all-around and a limited-slip differential. Suspension was independent front with a four-link, solid-axle rear-end located by Watts linkage. The FB RX-7's "12A" 1.2-liter rotary engine produced just 100 hp, but its compact size allowed it to be mounted low and behind the front axle for a superior center of gravity and weight distribution compared to a conventional reciprocating engine.

In 1984, the FB RX-7's interior was more comprehensively redesigned while a new GSL-SE trim added a 1.3-liter "13B" rotary with fuel injection, upping horsepower to 135 hp. Even with the mandatory sunroof and plenty of power and luxury accessories, the GSL-SE still weighed less than 2,500 pounds, though price had increased somewhat since the car's earliest days. 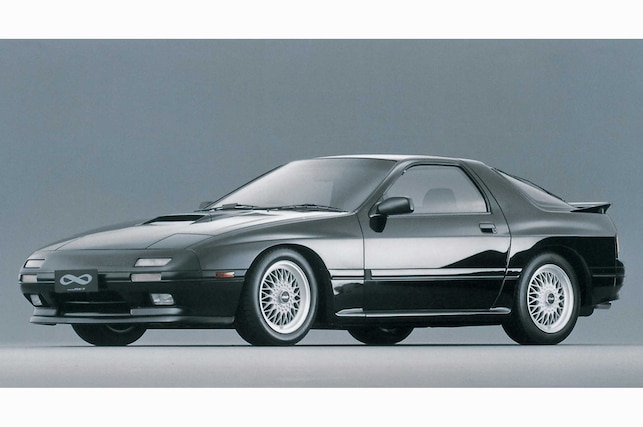 The second-generation RX-7 (internally known as the FC3S or simply FC) replaced the first-generation car for the 1986 model year. The FC was larger and heavier than the outgoing FB series RX-7 with more derivative styling that took cues from the Porsche 944 and Dodge Daytona. Nevertheless, the car was heavily developed and more upscale, with 146 hp from a revised 13B rotary engine, electric power steering, and optional adaptive strut-type independent suspension. MotorTrend liked the 1986 RX-7 enough to name it Import Car of the Year, and Mazda was still only getting warmed up. The RX-7 Turbo II arrived for 1987 with 182 hp and a sub-7.0 second 0 to 60 mph time. A convertible RX-7 debuted in 1988, while in 1989 a lightweight, performance-oriented (yet, naturally aspirated) GTU version appeared, marketed at those who followed the RX-7's success in the GTU class of the IMSA racing series. The last model year for FB RX-7s was 1992.

It's said good things come in threes, and the third-generation RX-would be the last produced to date. By the 1990s, competition had dramatically increased, especially from Mazda's Japanese competitors Toyota and Nissan. Launched in 1993, the FD series RX-7 boasted elegantly organic styling from Tom Matano, more power than ever (255 hp) from a twin-turbocharged, twin-rotor 13B 1.3-liter rotary engine, and a newfound focus on creating a pure, lightweight sports car. The twin-turbo configuration featured a smaller primary turbocharger and a secondary larger turbocharger. By kicking in sequentially, the RX-7 had very little turbo lag and a sub-5.0 second 0 to 60 mph time. With a curb weight of just 2,800 lbs, the RX-7 was a strong performer-especially in optional R1 and R2 spec with uprated suspension, structural rigidity, and aero add-ons. In fact, the RX-7 again claimed MotorTrend's Import Car of the Year title in 1993. Unfortunately, an escalating MSRP and weak economy spelled the third-generation RX-7's demise after just three years in the U.S. , with 1995 being the final model year. The FD RX-7 soldiered on until 2002 in Japan.

In 2015, Mazda released the RX-Vision Concept at the 2015 Tokyo auto show with a new Skyactiv-R rotary engine, but no production plans are forthcoming.

Mazda's RX-7 was extremely successful in motorsports, with the first racing versions finishing 1-2 in class at the 1979 24 Hours of Daytona. In fact, RX-7s won IMSA's GTU production-based racing class seven years in a row and winning IMSA's GTO championship an incredible 10 years in a row. These victories were often touted on RX-7s by stickers placed on the rear windows at the factory. Tom Walkinshaw Racing RX-7s won the British Touring Car Championship twice consecutively in 1980 and '81, and cars prepped by others won the 1982-'84 Australian Touring Car Championship, the 1983 Australian Endurance Championship, and three class podiums at the Bathurst 1000. RX-7s even competed successfully in the World Rally Championship in the early 1980s. Today, RX-7s continue to compete in amateur racing events around the globe, including spec racing series designed around the first-generation, 12A-powered cars. 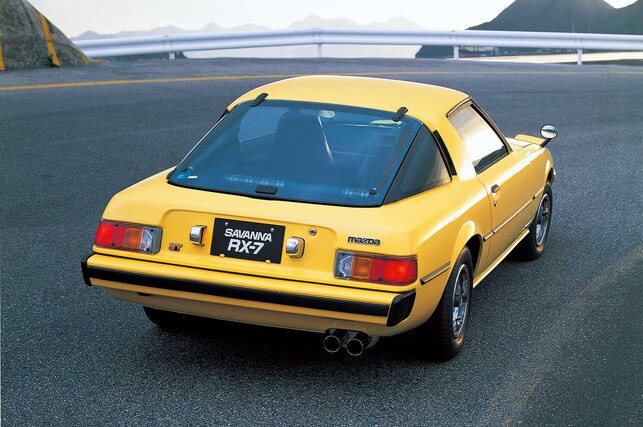 Because the RX-7 was sold as a relatively affordable sports car, many have been modified by owners, making it a challenge for purists to find a stock, unmolested RX-7. If you do find a clean, low-miles, original RX-7 of any generation, it will almost certainly be worth a heavy premium.

Do be aware that rotary engines are generally not very fuel-efficient and do take specialized knowledge and equipment to repair, so be sure to have a capable mechanic local to you if you're not able to do your own maintenance. While rotary engines are by nature simpler than conventional internal-combustion engines, with fewer moving parts, they do require oil to be mixed with gasoline in order to keep their internal seals lubricated, and this sometimes requires special care. Later turbocharged RX-7s can also be more maintenance-heavy than their earlier naturally aspirated brethren. 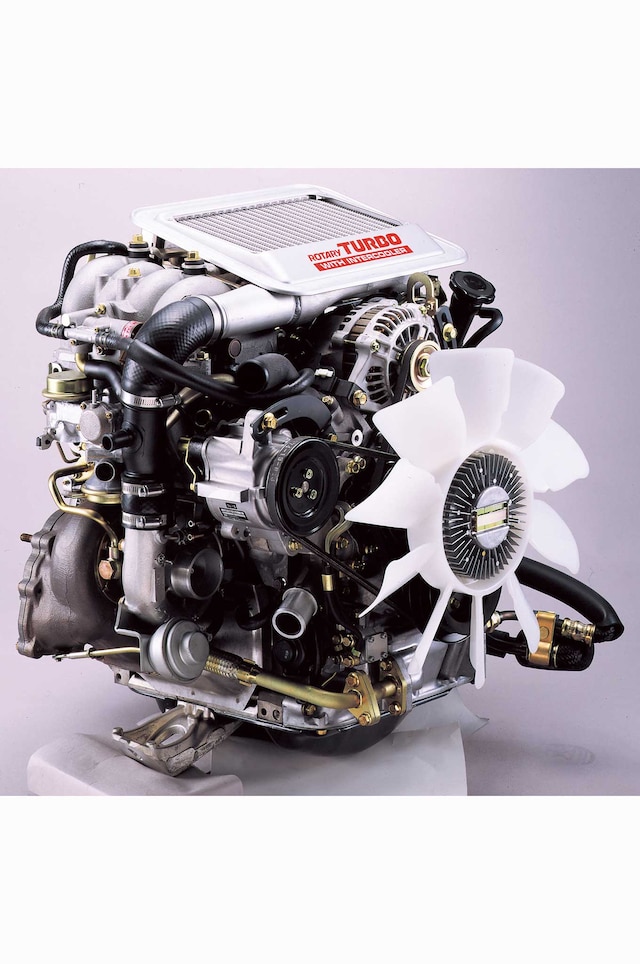 How Much Does A Mazda RX-7 Cost?

RX-7 pricing is highly dependent on generation, condition and options. Generally speaking, a first-generation or second-generation RX-7 in solid running condition will start at a few thousand dollars and run past $10,000 for a standout example or a higher-spec version. Third-generation cars in good condition start at perhaps $15,000 and will run past $50,000 for the best examples.

Is The Mazda RX-7 Legal?

All RX-7s first sold in the U.S. are legal to drive here. Global RX-7s sold before 1995 are legal for importation under the federal 25-year regulation, though not all states allow them to be registered to drive on the street.

Why Are Mazda RX-7 So Expensive?

Most RX-7s are not expensive, but you will pay a premium for those in excellent condition, and for third-generation examples, because they are quite rare relative to the previous generations.

What Is The Best Year For A Mazda RX-7?

If performance is paramount to your RX-7 ownership dreams, we would opt for a final-generation car produced from 1993-1995. For those looking for the purest, lightest RX-7 possible, the first-generation cars from 1978-1985 will give a classic RX-7 experience.

So, You Want to Build a Racing Simulator ...
SuperStreetOnline features