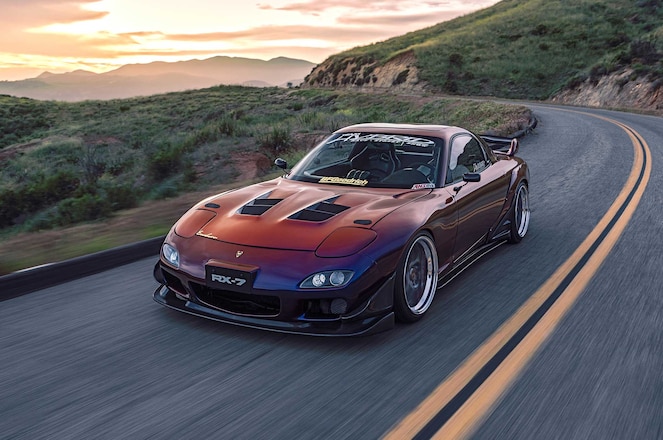 When maintained and operating correctly, Mazda's twin-turbocharged 13B-REW rotary engine that came under the hood of the third-generation (FD) Mazda RX-7 has plenty of advantages over your typical piston driven engine, such as fewer moving parts, a better power-to-weight ratio, smooth power delivery, and a higher revving ceiling (not to mention they sound frickin' awesome). But some FD RX-7 owners have also experienced the unique Wankel engine's, er, temperamental side, which was the case for Southern California's John Ubalde.

Indeed, the car you see here isn't Ubalde's first FD Mazda RX-7 but his second, and it's powered by an LS1 V-8 engine out of a 2002 Chevy Corvette. Why? Well, let's just say his first build didn't quite work out so well (see photo below).

He vowed to repurpose his next FD project to be as reliable and street friendly as possible, which meant forgoing the performance benefits and JDM coolness of Mazda's 1.3-liter twin-turbo rotary for a more dependable, naturally aspirated American-powered V-8. 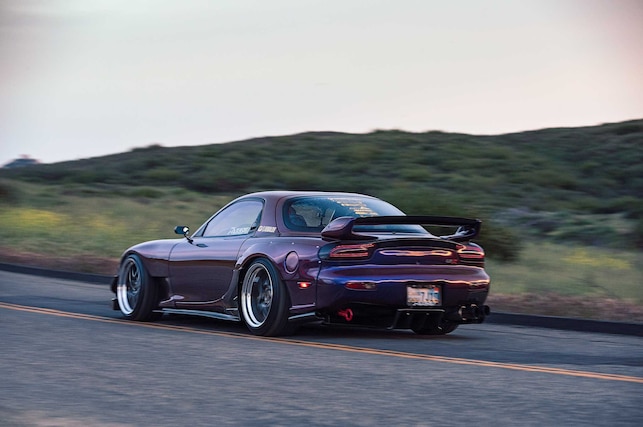 While an LS swap is frowned upon in some circles, that doesn't mean the car can't still be impressive in its own right. In fact, this isn't the first time we've showcased an LS-swapped RX-7. Back in 2015 we featured a 450 hp LS1-powered RX-7 wearing one of the first Rocket Bunny FD body kits and Volk Racing ZE40 wheels. We recently had a chance to catch up with Ubalde to talk about his personal journey and latest RX-7 build.

SUPER STREET: Can you tell us about how you got into modifying cars in the first place?

UBALDE: My father will always be my main contributor to giving me the passion to work on and modify cars, from teaching me to change oil when I was five years old to changing timing chains on our family Dodge Ram van. Plus, growing up in the '80s where TV shows like Knight Rider, Street Hawk, Dukes of Hazzard, Transformers and movies such as Mad Max, The Cannonball Run, The Wraith, Smokey and the Bandit, and Condorman were just highlighting beautiful cars to fuel my passion even more.

SS: Taking it way back! So, what was your first car?

UBALDE: In the '90s, I was into both domestics and imports. My first car in high school was a 1982 Pontiac Trans Am. I kept this car very clean and simple because I knew I had bigger plans to try in the import scene. After I graduated high school and during my time at SDSU (San Diego State University), I bought a 1991 Nissan Twin Turbo 300ZX. This was one of my dream cars to have next to the RX-7, and this also led to my passion with the '90s JDM car scene. 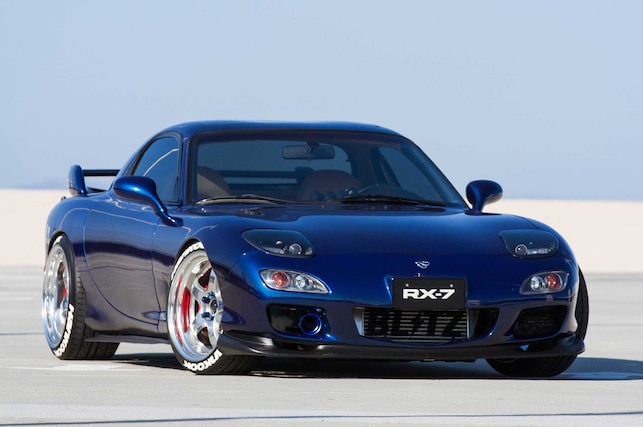 UBALDE: My friend, Jack, and I bought the car back in mid-2008 during the financial crisis. The car was modded some with a '99-spec front and some engine work, but overall, the car still needed work and we felt it wasn't a good time to dive deep into it financially, so we put it into storage until things got better. I moved to the Philippines in 2009 and stayed there for a good couple of years (even got married there, too!). In 2011, after returning from living in the Philippines, Jack and I finally felt it was a good time to take "Blue7," as we called it, out of storage.

We rebuilt the engine, did some body work, new wheels, and in 2014 I completely took over the car and bought my friend's half out. After a little bit of time, it started growing into a real project/show car, with the focus of making it an attainable example for other would-be FD3S owners. Then, in late 2018 I was taking Blue7 to a car show early in the morning when the ignition for one of my rotors stopped firing, yet the car was still pumping a ton of fuel into the rotor. Basically, so much fuel built up that it caught fire under and at the rear of the car. Even with two extinguishers, it was very difficult to reach the areas under the car, so I had to let her go. 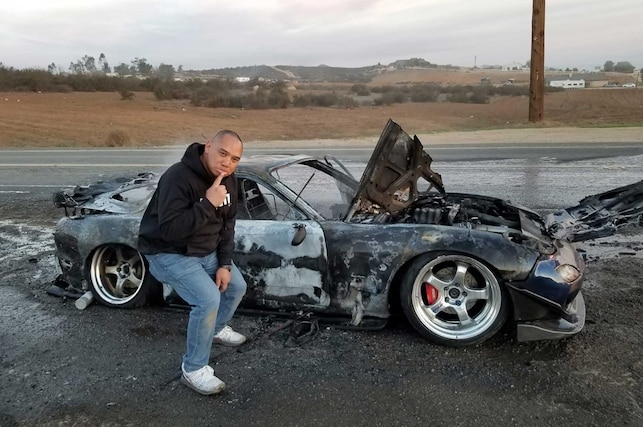 SS: Sorry to hear... Is this a common issue with rotaries as I assumed it's usually a seal issue?

UBALDE: Rotary engines are somewhat of a different monster if you don't know anything about them. Apex seals are one way they fail, not to mention water seals, corner seals, bad housings, etc... They just need a little more attention than the normal piston engine where you can get serviced anywhere. The ignition going out leading to a major fire is not a common theme, although fires nonetheless are pretty common for rotary owners. Many experience engine bay fires due to faulty fuel pulsation dampeners that get old over time among old fuel lines.

SS: I'm guessing this influenced your decision in going against a rotary and toward something more reliable next time around?

UBALDE: While I had the Blue7, a coworker of mine had a red LS-swapped RX-7 sitting outside of his home for about eight years. I recall telling him years ago that I will come to purchase that red FD from him. The plan was to pick up a cleanly swapped LS version of the FD for long distance cruising, but still have a rotary FD built for track and show days. So my overall plan was to have the Blue7 and "Phoenix7" (the car I have now) sitting in the garage together in harmony. Unfortunately, the rotary gods had a different fate for Blue7.

SS: A bummer, but luckily you were able to pick up Phoenix7 after the incident to keep the dream alive. What have you liked about the LS swap the most?

UBALDE: The beauty about the LS is that it is way more carefree compared to the last FD. Parts and places of service are plentiful. At my age, it's something I cherish because having a family and other responsibilities makes having this car a godsend project in a way. 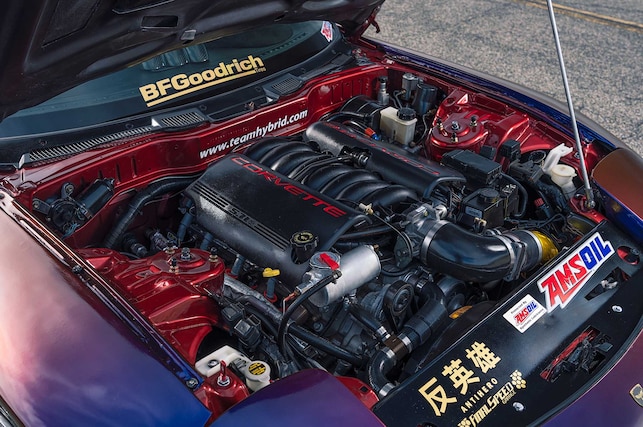 SS: Why the LS1 in particular and can you elaborate more on the engine spec?

UBALDE: The LS1 is from a very low mileage 2002 Corvette donor with less than 20,000 miles on it. Hinson Supercars put the engine together with Patriot stage 2 ported and polished 706 5.3-liter heads. Giving the engine more compression are improved springs and Ti retainers, and a mild cam with ASP pulleys made the car better for more street-oriented driving. Taking a LS6 intake manifold from a Z06 added easy horsepower, too. The one beauty of the LS1 is that it's all aluminum, so it isn't as heavy as its other iron counterparts.

UBALDE: The car is putting down a reliable 415 whp and I'll be putting the nitrous system back onto the car to get it to 500 whp. I'm very happy with the current setup and do not see changing it anytime soon unless someone wants to put a nicer engine in there for me!

SS: Can you elaborate more on what makes this a street car because it could easily be mistaken for a weekend show/track car?

UBALDE: I wanted to make sure that this will be a comfortable and almost worry-free car to own with no headaches when I make long road trips to Las Vegas or other places. I made sure the A/C worked perfectly and power steering is adjustable. The carbon-fiber seats fit inside without any issues, recline, and are comfortable even for an eight-hour drive. I also chose the Reinhard Double Cannonball Ti exhaust to mate with the 3.5-inch piping. This setup actually has a low rumble, so my neighbors keep sane and don't complain—trading power for comfort and a more worry-free and enjoyable ride. 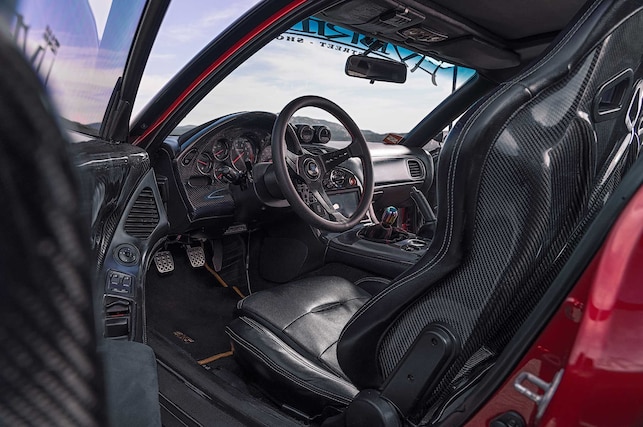 SS: The suspension is also chosen for its street characteristics as well, correct?

UBALDE: Yes, the Fortune Auto air piston lift system is a godsend when going through bumps, inclines, declines or ramps. Instead of a bagged suspension, I wanted something to still have the excellent handling of a coilover system but able to have the car ride at a nice height. Then, when needed I'm able to quickly raise the car up to get around obstacles. The system raises the car up about 4-inches. This has actually saved all the low hanging parts on the car many times.

SS: What color was it originally?

UBALDE: This was originally an automatic transmission Touring model in Vintage Red. During the swap and manual conversion, the car was completely stripped and painted in 50th Anniversary Red Metallic Candy. It's a wonderful and vibrant color!

SS: So why the wrap?

UBALDE: I definitely do not want to lose this paint job, hence why I went with a quality wrap. When wrapped by a professional and experienced installer like Omnium Auto Styling, almost everyone that sees the car actually thinks it is a multi-stage paint job.

SS: The Blitz wheels are one of my favorite changes you did. Why did you choose this particular design?

UBALDE: The Blitz Type-03 were one of my favorite wheels back in the late '90s. I actually had one of the first sets in the U.S. on my 300ZX! The Type-03 is such an iconic '90s era specific wheel meant for a '90s JDM car. They were discontinued in the early-2000s and it took me years to find a perfect set. Once I found a set of 17s, I wanted to make the wheel have the same personality as the Phoenix7, updated for the new millennia. My wheel builder "ChamorrowBoy86" gave it an updated 2020 flare enlarging them to an 18-inch with step lips, gunmetal faces, black gold center caps, and gold hardware.

SS: I must say—well done, John! Any last words?

UBALDE: Thank you to my wife for keeping this build alive and my kids cheering me on when we take it to shows; my brother Jeff Ubalde for the endless help building this old bucket of bolts; James Lin (president) and Scott Dean (San Diego director) from Team Hybrid for all the support and connections building the car in such a short amount of time.