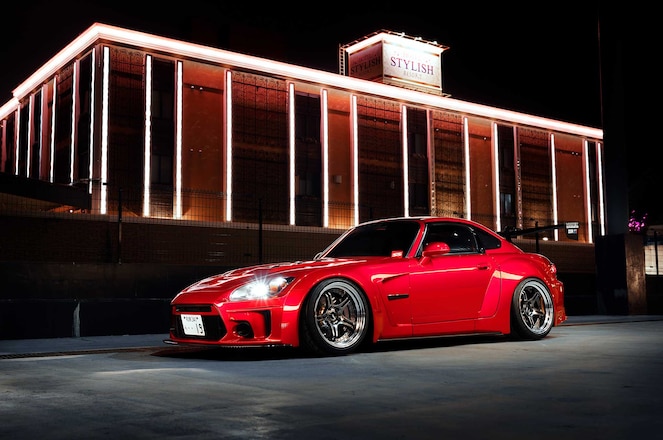 Over the years we've featured some pretty remarkable widebody Honda S2000 roadsters. May they be sleek street machines, squeaky-clean show-mobiles, turbocharged track terrors, or some combination of the three, the widebody Honda roadster is an impressive aftermarket magic trick. So when Mode Parfume invited us to come to Osaka and check-out their 2008 AP2, a car that we'd only seen photos of from Osaka Auto Messe, I was quick to jump over to the mainland where I met with our fearless editorial leader, Sam Du, and photographer, David Ishikawa, for what would become known as the Super Street southern Japan shop tour blitz.

WHO IS MODE PARFUME

Mode Parfume and its parent company, Blow Design Co., Ltd, are housed in the shipyard district of Izumiotsu—sharp contrast to the humble rural setting we had found ourselves in earlier that day while visiting Toyota Corolla specialist Inazuma Worx. And whereas our first shop visit that day proved to be ultra vehicle specific, Mode Parfume is far more all-encompassing. From award-winning VIP sedans and Honda minivans, to producing a series of best-selling aftermarket fog lamps, this Osaka staple has designed and crafted a wide range of automotive aftermarket parts. 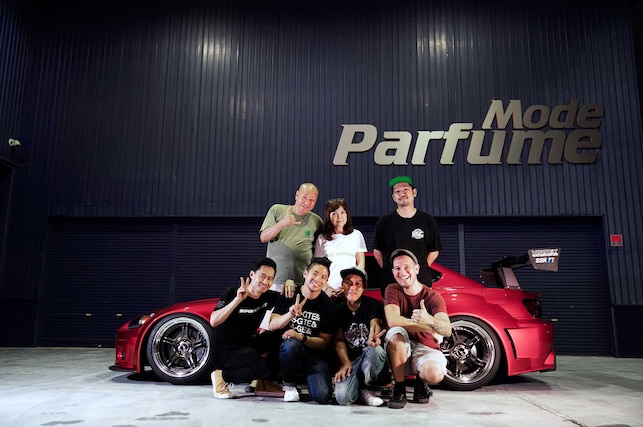 Founded and run by Masao Hirano and his wife, Nobuko, this husband and wife team created a formidable trifecta when they combined their talents with son-in-law, Hiroshige. With over 20+ years of experience on the Mode Parfume resume, there is no shortage of builds that we could cover, so consider today's subject matter a teaser for what is to come.

After spending an afternoon with Mode Parfume's beautifully crafted, Phantom GA-MU widebody AP2, I was left both enchanted and optimistic about what has yet to come. There's a lot to like about the Mode Parfume S2000, but it's also a little on the unusual side, and not entirely finished, either.

So, before we get too deep into the details, let's acknowledge the elephant in the room: This AP2's 2.2-liter inline-four powerplant is pretty damn close to being bone stock (F22C1 is rated at 240hp from the factory). Engine and transmission mods include little more than an HKS "Super Sound Master" exhaust, Tanabe straight pipe, and some Mode Parfume titanium exhaust tips. There's also a Rywire grounding cable kit, Mode Parfume's own carbon fiber cooling plate, and some Downstar dress-up goods, but in the eternal words of Porky Pig, "That's all folks."

Masao Hirano informs me that the naturally aspirated F22C remains virtually unaltered due to several reasons. He goes on to tell me that one of the main causes is that he wanted to first focus on perfecting the car's aesthetics, before moving on to propulsion and whatnot. Since an entire line of original Mode Parfume powertrain components still have yet to go into development, I focus on the portions of this AP2 that have been modified, only to find myself caught off guard once again. 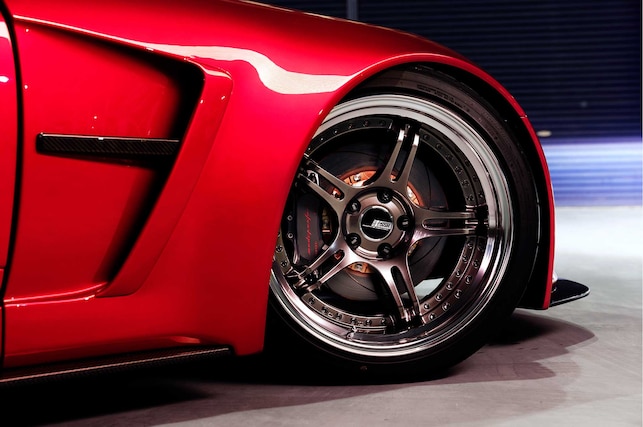 I have seen a lot of S2000 builds in my day, but never one that sat in such a broad, completely squared stance. All four corners of this roadster roll on 18x10.5" SSR Professor SPX wheels, all of which come encased in matching 265/35ZR18 Dunlop Direzza ZIII rubber. It's not like this is a turn-off, it is just exceedingly rare to find an S2000 not rocking a staggered wheel setup, and Hirano-san likes being different. He also likes having as much grip as possible when cornering, and the way in which these wheels filled each arched fender of his Phantom GA-MU widebody kit.

Building Honda roadsters is a bit of a new bag for Mode Parfume. The shop's divergence from VIP builds began a few years back, when a trip to the United States showed Hirano-san first-hand America's love for modified S2000 roadsters. After witnessing our unwavering dedication to the chassis, and some lengthy consultation time with good friend Yasu Shimomukai of Exceed Japan (who also photographs for us from time to time), Hirano-san took the dive, and began developing his own widebody S2000 AP2 aero kit.

But because Hirano-san insisted that his widebody kit must bolt to the AP2 seamlessly, mounting his aero to the car proved to be a real challenge. While invisible mounting points are definitely ninja-grade, hiding all of that hardware added a lot of additional design time. Determined to emphasize the beauty of the lines he had just created, and not have the eye distracted by things like rivets and whatnot, Hirano-san redesigned his mounting techniques. The end result was a widebody kit with perfect proportions, attractive lines, and hardware that is completely hidden from sight. 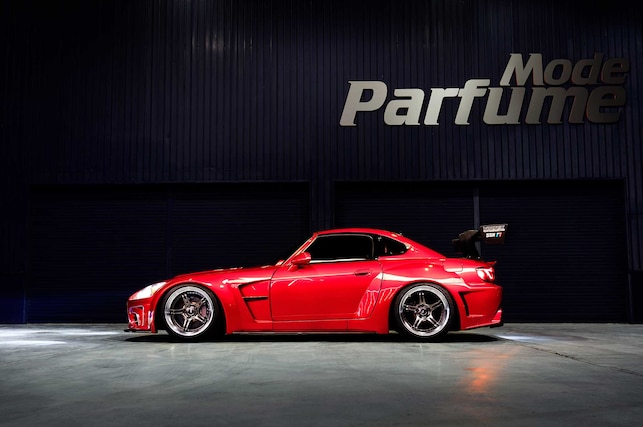 Being that this is a sports car and not a VIP sedan, Hirano-san was able to pull a healthy amount of inspiration from track machines when designing Mode Parfume's Phantom GA-MU widebody. Dynamic yet refined, there's a lot to admire on this kit if you are a fan of functional aerodynamics. While flat-bottomed barge boards and flush front lips channel air and fight drag, an aggressively split and raked rear diffuser provides stability via strikingly sharp lines. In contrast, all four fenders are of a rounded design, with vents that are intended to not only look menacing, but also expel hot air from brakes and reduce lift as well.

While our photographer David did his thing, I stood back, soaking-in the architecture in front of me. The deeply serrated carbon fiber "Super Bonnet '' from First Molding sits in stark contrast to the rounded rear decklid spoiler out back, a collaborative creation made in conjunction with Exceed Japan. And while you would think that the massive Voltex Swan Neck GT Wing hovering over it would distract the eye, the space between the two leaves ample room for admiration of both upgrades. With a set of slick Intec LED tail lamps installed, and layers of rich, Valencia Red Pearl paint cloaking it all (same paint used on the new NSX), Mode Parfume's AP2 is just as elegant as it is aggressive. 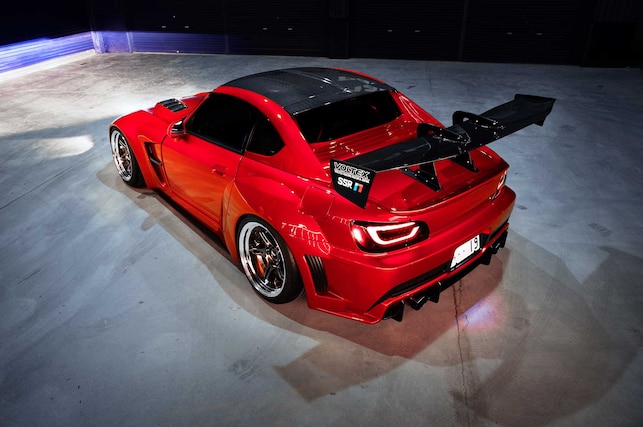 But the real star of the aero show here is this car's hardtop. It's been a hot minute since Honda discontinued its production of rigid tops for the S2000 chassis, and Hirano-san saw this as an ideal opportunity to make his own version. With its recessed rear windscreen, miniature roof spoiler, multi-tier lower portions, and unique inlaid lines, the carbon fiber Mode Parfume Phantom hardtop is its own entity. Available in either FRP or carbon, each of these hardtops comes with ABS window frames and real glass for optimum visibility.

Hirano-san also made sure that his signature line of forged big brakes WAS installed on his S2000 test subject—six-piston calipers and two-piece rotors that were designed in partnership with Endless. The Mode Parfume team took this same collaborative approach to coilovers, which were engineered and manufactured in Japan with the help of Tanabe. These 20-way adjustable suspension upgrades feature their own unique miniature pillow balls and come in an 18K front/16K rear spring rate layout.

Interior upgrades are just as straightforward and purposeful. Bride VIOS III seats keep the driver and passenger strapped-in, Takata 4-point harness hold them in place, and a Cusco rollcage adds rigidity. Meanwhile, Battlecraft's shift knob encourages precise throws, as a MOMO steering wheel folds out of the way with the help of a Works Bell RAPFIX GTC tilting hub assembly. 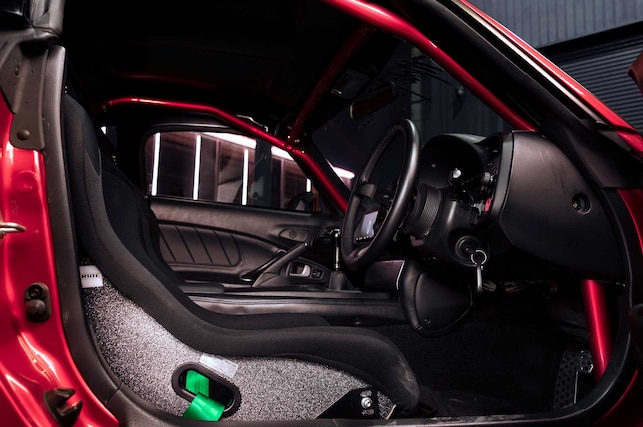 WHATS NEXT FOR MODE PARFUME

Vehicle walkaround complete, I turn to Masao Hirano, and ask what's next for Mode Parfume. Outside of engineering powertrain upgrades for the S2000 chassis, Hirano-san tells me that the company plans on focusing heavily upon the development of body kits for Honda vehicles from the 1990s and early 2000s. So, all of you EG, EK, and DC5 fans get ready, because there's a strong smell of "Parfume" in the air, and it's about to be "blowing" your way. #dadjokes

After 20 years, the S2000 is still a fan favorite and people still can't get enough of them, myself included. Recently I organized a local canyon drive with six naturally-aspirated S2000s up local Angeles Crest Highway. S2000s remain one of the most fun two-door sports cars driving enthusiasts can hop into that not only handle and perform well but have a wide range of aftermarket parts still available, which is why even styling brands like Mode Parfume are revisiting the car despite the last one rolling off the assembly line over a decade ago. There's no shortage of S2000 owners rocking Mugen, Spoon and Voltex parts, so the introduction of Mode Parfume's hardtop and widebody to the U.S. market is a breath of fresh air for many.

Mode Parfume's widebody conversion doesn't come cheap, though, and if you remember correctly, AutoFashion actually debuted it at the 2017 SEMA Show in the Toyo Tires Treadpass. The whole conversion will run you close to $6,500. As far as the hardtops are concerned, Mode Parfume's FRP version will go for around $2,300 while the carbon iteration is $3,250. How's that fare compared to the rest of the market? Well, the Spoon FRP hardtop costs $5,000. The Mugen $3,500 for FRP, times two for carbon. The OEM hardtop was approximately $2,500 when in production but now, in the used market, will often carry a $4,000 price tag. Mode Parfume's pricing is spot on if you ask me, and if you're the type of guy that likes to be different and have some exclusive parts that not every S2000 owner is rockin', Mode Parfume might be the answer you're looking for.

Currently, Mode Parfume goodies are available only at AutoFashion USA and ICB Motorsport.