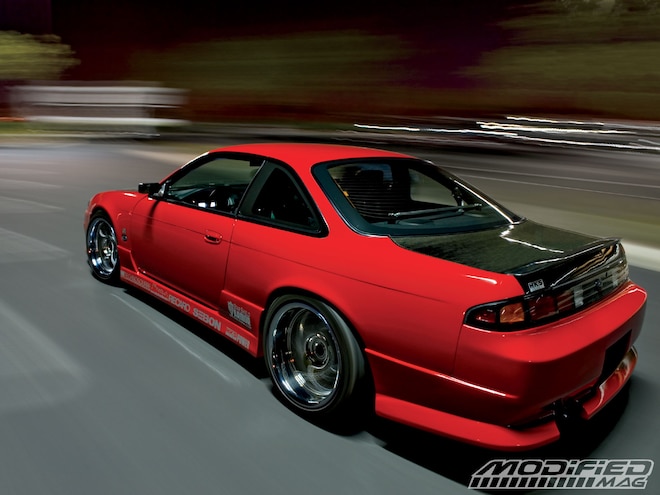 There isn't much to say about the Nissan 240SX that most of the Modified Mag audience doesn't already know. It has taken drifting to new heights and single-handedly managed to inspire an entirely new generation of enthusiasts. That being said, the ability to actually build a 240 in today's market that stands apart from the crowd without being overstated while also excelling in nearly every performance category is quite a feat. Jason Dias, however, has managed to meet these increasingly stringent criteria and even surpass it in some ways, by serving up his red rocket of an S14 both on the street and on the track.

Jason originally acquired the car in 1999, and within a year had already swapped out the venerable KA for SR-powered goodness. He then took to the track and began drag racing and road racing on a regular basis, so much so that he began itching for more power and control much sooner than most. At this time, SR20 development was not nearly as extensive and mature as it is today, and jumping into the foray of SR building and tuning was a bit sketchy. Nevertheless, Jason moved forward by fortifying the internals with new pistons and rods first and then used this as an opportunity to upgrade the turbo setup as well. With the freshly built setup ready to go after several months of waiting and several more months of build time, Jason hit some costly tuning snags when attempting to utilize rom tuning north of the 350-rwhp mark. The SR20 in turn decided to magnificently blow itself to pieces.

Instead of being discouraged from the tuning woes, the opportunity to go all out was there once again, and research began on some of the top-shelf parts that HKS had to offer in Japan. Not wanting to skimp on any aspect of the build, a genuine HKS 2.2L Stroker Kit was purchased and complemented with the full onslaught of the very best HKS had including valvesprings, intake and exhaust cams, injectors, a GT3037S 52T 0.73 A/R and more. Unfortunately, the gremlins still weren't done wreaking havoc under the hood. Although details are a bit sketchy, what we do know is that tuning issues again thwarted power and reliability. This eventually led to another(!) blown motor, more time and money wasted, and HKS parts were on their way over from Japan for the third rebuild. This would be the last time and it simply had to be done right, thus it was eventually decided that consistency had to be maintained across the board, and the move was finally made to utilize the HKS F-Con V Pro.

The HKS F-Con V Pro could not have been a better match, as setup has proved to be reliable, consistent and powerful. Jason managed to hit peak numbers of 440 rwhp and 397 ft-lbs of torque with the current setup and was glad to have his internals safely working as intended. With tuning issues finally sorted out, Jason began to market the car in 2004 and was able to reach an agreement with Final Konnexion to display the vehicle at SEMA that year. Thus a full Final Konnexion widebody kit was fitted, along with an aggressive set of 18-inch Gram Light 57S-Pros in SBC with the head-snapping Ti finish. After the SEMA Show in 2004, the track bug bit once more, putting the S14.5 on various road courses with additional frequency through early 2005. However, disaster struck in March of that year when Jason was piloting the car around an auto-x course, and his mint Final Konnexion aero and the distinctive kouki front was completely destroyed. The trying decision was then made to mix things up, changing the kouki front to an S14.5 front, including an Inner Circle S15 front bumper and front fenders along with a carbon-fiber hood, trunk and lip wing from VIS, Seibon and Origin, respectively.

With the downtime for the S14.5 conversion, it was also time to step up the suspension game and HKS Hypermax D coilovers were installed, along with a host of adjustable arms from Tanabe. To help put power to the ground more effectively, an HKS twin plate clutch and flywheel were installed, along with a Nismo LSD to prevent one-tire fires under full boost. To keep the driver and passenger from flying around the cockpit, Jason decided on a set of Recaro SPG seats in black, along with Takata harnesses, a Nardi Deep Corn steering wheel and a set of Sparco pedals to round out the upgrade. Stopping power initially came in the form of Z32 brakes, but Jason decided with the increased track duty that the car would now see, the move to a mouth-watering Endless six-piston BBK was warranted, and this last piece of the puzzle was sourced and installed.

The weekend before our photo shoot, Jason had just returned from a grip/Time Attack style event out at Willow Springs and produced a very favorable impression of the car's setup. He had just gotten it corner-balanced and ended up pushing a set of Falken RT615s to their limit, but found the car to be well suited for track duty yet civil enough for the street. With 10 years of owning and building the car under his belt, we had to ask if Jason would follow the trend and post his car up for sale once the mag hit newsstands. Unfortunately for all the would-be buyers, we're almost certain Jason will not be joining those ranks, as he mentioned he is still working on the new rollcage setup! Either way, his S14.5 is certainly one of the finer examples of a fully functional, clean and purposeful build and it's obvious that he is in it for the long haul. With his red rocket S14 turning heads on the street almost as fast as the car can turn on the track, you'd be hard pressed to find a finer example of a 240SX anywhere! 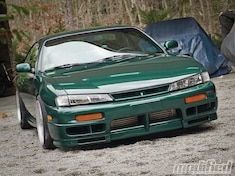 Spencer Tull of Raleigh, North Carolina, is a true enthusiast, having owned his 240SX for the last seven years. And as you may have guessed, this is no shop-built garage queen. Keep reading for the full story along with pics. - Modified Magazine 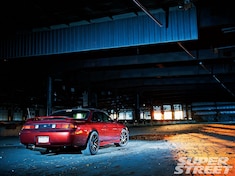 Here we bring you the 1998 Nissan 240SX where throughout the years, we've done our fair share of features on the 240SX platform. Many of them were drift cars, show cars...whatever classes you want to put them in, we've done it. - Super Street Magazine 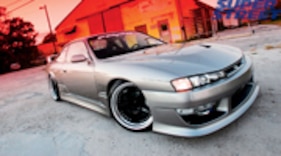 An article about a modified 1998 Nissan 240sx s14. Find all of this s14's conversions inside Super Street Magazine.

Check out this 1998 Nissan 240SX powered by a SR20DET engine! Only at Turbo Magazine.