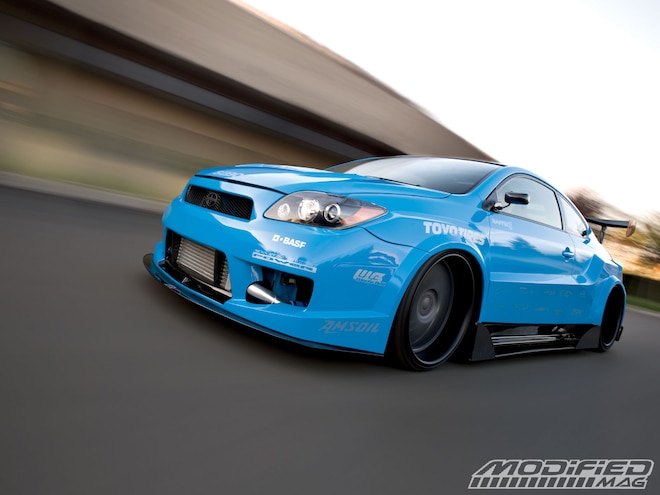 When Scion offers you a car and a $15,000 budget to build it for their booth at SEMA (the biggest automotive aftermarket trade show in the world), you have officially arrived as a highly respected show-car builder. That’s exactly what happened to John Pangilinan in 2008, when Scion offered him one of three tCs that were to be built for the Scion Tuner Challenge, with the winning entry—selected by the National Custom Car Association at the ’08 SEMA Show—receiving a trophy, some fresh gear from Sparco and 10 grand in cold, hard cash. 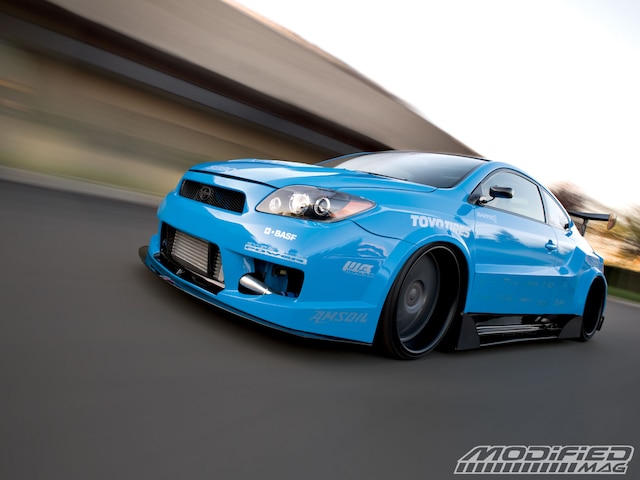 You may not be familiar with the name John Pangilinan, but if you’ve been around the tuner scene for a while, you will no doubt recognize his award-winning E46 BMW 3-series sedan that was featured in the movie “Herbie: Fully Loaded” as well as Meguiar’s car polish TV commercials. You may also be familiar with the influential tuner car club John co-founded called Garage Life, as well as the tuner shop he helped establish called DTM Autohaus and the wheel lines he helped launch called DTM Kreuz and Jline. John was also the Marketing Director for Speedwell Footwear, a lifestyle automotive brand that many of you will remember. These days, the entrepreneurial Mr. Pangilinan is an account executive for the ID Agency, a marketing firm that represents Formula Drift, Recaro, Brembo, Puma and Belltech to name just a few of their clients. With a track record like this, it’s easy to see why Scion came knocking.

Building a SEMA car may sound like a piece of cake for a guy as hooked up as John, but with less than three months to complete the project and with a very busy work schedule, including traveling with Formula D, the thrash to build this wild widebody tC was nonstop. But before any wrenches could be turned, a concept for the build needed to be developed, and for that John turned to his friend and renowned Marvel Comics inker Jon Sibal. “Sibal has been a friend for a while now and when the opportunity to build this car came about, I knew that he was the only one who I wanted to collaborate with. Jon really outdid himself on the tC with very little time. His renderings were very detailed, but also extremely difficult to create from scratch, so some compromises had to be made in order to complete the car on time.”

So what was Sibal’s inspiration when penning the aggressive widebody look for this tC? According to Jon, who’s not only famous for drawing superheroes but also some seriously sick car concepts that you can check out at www.jonsibal.com, “The inspiration of the design came heavily from a combination of race cars from DTM, BTCC and WTCC. I’m a fan of how these cars look and thought it would be cool to see a street version. But I didn’t want to replicate the race cars completely, since I wanted the tC to have its own identity and to be able to stand on its own.”

Once Scion had approved Jon’s renderings, it was up to Pangilinan and his team to turn an artist’s vision into a rolling and running reality. To handle the exterior transformation, including fabricating and installing the bodykit and painting the whole car, John turned to DTM Autobody in El Monte, California. DTM did the paintwork on John’s gorgeous Candy Brandywine E46 Bimmer and has built some pretty wild fender-flared Euro machines (check them out at www.dtmautobody.com), so he knew they’d be up to the challenge posed by Sibal’s Euro race car–inspired design. Once the custom kit had been constructed and installed, consisting of a mix of carbon-fiber panels and fender flares, some fiberglass work and a bit of bondo, DTM installed a Seibon carbon-fiber hood and trunk and then sprayed it all with BASF Porsche “Mexico Blue” paint. John estimates that this part of the build took about two to three weeks of nonstop labor, with some parts of the bodykit being made easily removable so that the tC can be shipped without damaging the unique panels. APR also pitched in with a set of its carbon-fiber Formula 3 sideview mirrors, a GTC-300 rear wing and a custom carbon-fiber front splitter.

But, of course, the wildest bodykit and most flawless paintjob in the world must be complemented by the right stance and wheel fitment if the overall look is going to come together properly, so John paid very close attention to these details as well. Providing that Touring Car slammed-to-the-ground look is a set of KW Variant 2 coilovers, while the 20-inch custom Jline 11RL3 three-piece staggered wheels wrapped in Toyo Proxes T1Rs (245s up front and massive 315s out back) provide a VIP look, helping communicate Sibal and Pangilinan’s vision of a street version of a WTCC machine. The rims’ charcoal centers and gloss-black lips, behind which are tucked Brembo front and rear big brake kits, really give them a sinister look that plays off of the bright-blue paint while tying in nicely with the gloss-black side skirts. Clearly a lot of thought went into the overall exterior design of this hulking superhero of a Scion, and the execution of the design is remarkable both for its quality and attention to detail.

Under the hood and inside there’s an equally impressive level of attention to detail, with more of a street car feel to the modifications. A GReddy turbo kit has been bolted to the stock 2.4-liter 2AZ four-banger, which breathes out through an Agency Power titanium after-cat exhaust that’s been custom-mounted to fit the center-exit rear bumper design. There are also some nice dress-up items in the engine bay including a carbon-fiber valve cover from Racing Solution, an ARC oil cap and a carbon-fiber battery from Braille. Inside, the Recaro Sportster seats and a Personal Neo Grinta steering wheel communicate some sporting intentions, as do the Sparco harnesses and GReddy gauges, but the impressive in-car entertainment goodies suggest that this Scion isn’t just about having fun around a racetrack. Creative Car Audio out of Santa Fe Springs, California, did the install, including Rockford Fosgate amps, subs, components and cables along with Alpine’s W505 double-din mobile multimedia station, dual 7-inch monitors and a M740BT touch-screen display with Bluetooth connectivity.

According to John, “If it wasn’t for the great friends, family and girlfriend I have, the project wouldn’t have been completed on time. The guys at the shops get extra kudos for all their hard work and dedication on this project, especially the team at Creative Car Audio and DTM Autobody.” And as it turned out, John’s tC wasn’t just completed on time, it won the Scion Tuner Challenge at the ’08 SEMA show, has subsequently been on display at the Los Angeles and Detroit Auto Shows in Scion’s space, and is now on tour with Scion and will be featured in the Toyo Tires 2009 advertising campaign. Those are some serious accomplishments, even for a superhero of a Scion like this one, making it all the more likely that John Pangilinan and his collaborators will be pressed into action for this year’s SEMA show. We can’t wait to see what he comes up with next!