He Used To Roll Deep In Vintage Japanese Sports Cars, But These Days Bryan Higgins Rocks A Chevy Cobalt SS 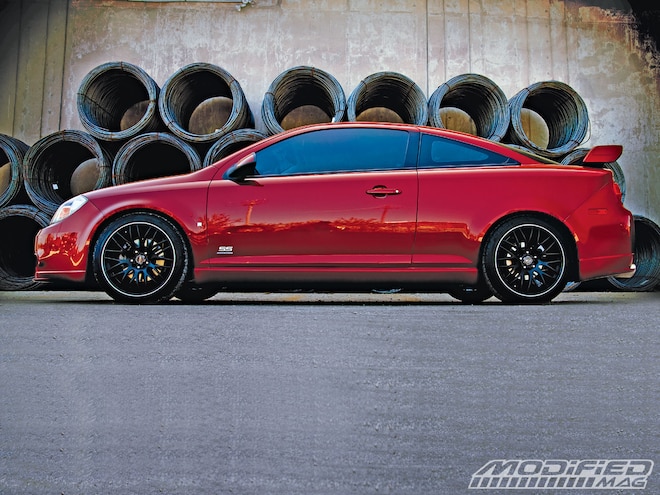 It may seem odd to some of you that Bryan would go from classic and more modern JDM icons like the Supra, 280Z and Eclipse GSX to a domestic platform like the Cobalt, but his experience on the street convinced him it was a machine worth considering. "A friend of mine picked up a simple Stage 2 Cobalt SS and pulled up next to me at a light. I took the bait and proceeded to get walked on by a fancy Cavalier. So I did some poking around on Cobaltss.net to see what was going on with these cars, the underrated lawn gnomes of the spocom world. Pretty soon I was shopping for one and found the one I was looking for after a couple of test drives. Red, LSD, no sunroof, heated seats. Game on! Picked it up on St. Patty's Day and that Sunday was at the track with it stock-ran a 14.6 at 97 mph. Not bad for a stocker. The following Monday it went back to the dealer for the Stage 2 upgrade."

And thus began another saga of modifying what was originally meant to be a nice daily driver, in this case starting with a K&N intake, Pacesetter header, custom downpipe and a 3-inch Vibrant after-cat exhaust. After that Bryan picked up a used Snow Performance water/meth injection kit from a friend, but it was missing a few key parts. "I picked up a Hobbs switch, relay, wiring and then started making noise in the garage until it was all hooked up."

With the water/meth kit and the Stage 2 pulley and 42-lb injectors from GM, Bryan tuned the ECU to a pump-gas safe 11.8 air/fuel ratio, resulting in a solid 273 whp and 254 ft-lbs or torque. He left the car like this for a few months, but couldn't keep his hands off it for long. "First I put a Smooth Flow 2.7 pulley on the car, which opened up a whole new world of torque. But then I began to realize that what makes power is efficiency, rather than just force-feeding the engine with boost. So I installed Supertech valves, springs and retainers along with custom ground cams to HKS 272 specs and got power up to 291 whp. But with this came a whole new level of hell in terms of tuning. Idle surge, random dying at stoplights, people looking at me funny. With the help of a local Honda/EVO tuner, we realized that since I do not have control over idle air volume, I had to attack the idle surge and coastdown problems with ignition timing."

Having sorted out most of the early tuning gremlins-like all good speed junkies-Bryan couldn't leave well enough alone. The custom cams were pulled in favor of GM Racing LSJ cams and a Harrop TVS blower. Power jumped to an impressive 342 whp at 18 psi. However, the factory lifters were trying to stretch themselves due to the small base circle of the GM Racing cams, so the stock cams went back in and after some careful retuning peak power figures actually increased to 352 whp and 308 ft-lbs of torque on C16 race gas.

But like the true enthusiast he is, Bryan wasn't just in search of more power and quicker E.T.'s down the dragstrip (with a best of 12.63 at 118 mph so far). Nope, Bryan has been bit by the "all-around" bug, wanting to turn his Cobalt SS into a street car that's equally at home on a racetrack, autocross course or dragstrip. In pursuit of this lofty and often elusive goal, Bryan installed a whole host of suspension and brake upgrades including SSC 120-lb springs, SS/TC shocks and PRS/OTTP 1-inch rear sway bar, a steering rack spacer, and lower control arm spherical bearings along with Hawk HP Plus brake pads, FTP braided stainless brake lines and Wilwood 570 brake fluid.

Think Bryan's done with the mods on his FWD domestic missile? Think again. "By the time this magazine makes it to the newsstand, a PRS ported head will be on the car, along with diamond pistons, total seal rings and PRS/OTTP big brakes." In fact, Bryan is so focused on making his Cobalt a serious all-around contender that he's even sold his Datsun 240Z drag car to fund his new Chevy tuning addiction. Talk about a true import to domestic conversion!

Special Thanks
Bryan, Al, Dan, Wes, Steve, Matt, Jeremie, Paul, Chad, Ryan and Scott at Modified by KC, John and Devon Powell with Powell Race Shop, Matt at Tune Time Performance, Choung at Revline, Josh and Sean with Over The Top Performance, Kenny with NCS, Ryan with RMD Photography, and everyone on Cobaltss.net 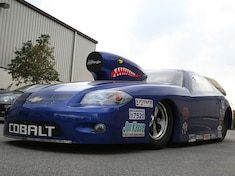