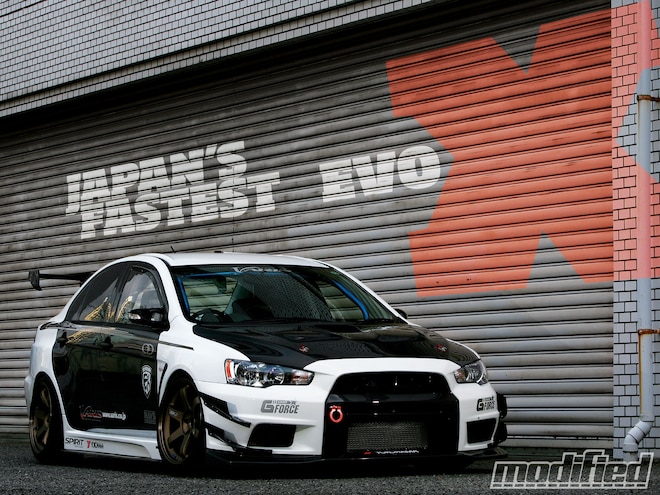 An astounding run at Tsukuba Circuit has given Varis' EVO X the title of quickest Evolution X in Japan.

Anyone who has an ounce of interest in the JDM world will know how important Tsukuba Circuit is to the Japanese. The little track nestled in the deep Ibarkai-ken countryside has become the Mecca of time attack over the years, the place where reputations are made or broken. Performance-oriented tuning in Japan is big business, and there's no better way to show off your products and your capabilities than to build a successful sub-minute time attack machine.

Tsukuba offers a true challenge to every type of car, be it naturally aspirated, turbocharged, 2WD or 4WD. Balance is key, a juggling act between top-end power for the long back straight and combining a responsive engine with a chassis that has plenty of grip through the technical corners. Amateurs eagerly follow the various Rev Speed and Option events, so for tuning shops and companies alike, it's the best form of advertising-a tough one at that-as there are no excuses and empty claims, everything is judged on the time the car records around the 1.3-mile circuit.

So when respected aero kit maker Varis decided to build a dedicated time attack EVO X, the company knew it had to do things right, which is precisely why it teamed up with Lancer-specialist Garage G-Force and the suspension masters at Sunbeam. Last time top Japanese names like these combined forces, the Tomei/Cusco/Voltex Impreza was born, and we all know how successful that car has performed.

Breaking the one-minute barrier at Tsukuba is a big deal for any modified car, but when you're shooting for a 55-second lap, you know you're playing with the big boys. The CZ4A has come a long way in the last three years since its launch, the 4B11 has proved to be more than capable of handling serious amounts of power, and the Varis EVO X is currently the fastest new-gen EVO in Japan. The 57.963-second lap is the time it set back in December at the Super Lap Battle, with Nobuteru Taniguchi behind the wheel. What makes this time special, however, is that unlike a lot of other cars that participate in the Open Class, the Varis EVO is still road registered and driven to and from events under its own power.

This was done intentionally in order to allow owners to relate to the modifications that have been carried out-after all, what's the point of fitting something so extreme you can't sell it to your own customers. Every part G-Force has installed is out of its catalog, starting with a strengthened bottom end, which includes a billet crank, lightweight connecting rods and oversized Tomei forged pistons. These components raise the displacement to 2,234cc (87x94mm bore and stroke). Lots of time went into polishing and porting the head to guarantee optimal flow, which matches the increased duration and lift of the G-Force camshafts quite well.

Supplying the forced induction is the HKS GT3240 turbo, mounted to an HKS manifold and kept in check by the GT type II external wastegate. Gases are dumped through the front pipe into a 90mm titanium exhaust, both made by G-Force. The intercooler and piping are by HKS, while the intake side of things is taken care by a Colt Speed carbon-fiber airbox, which is designed to scoop air from the grille area creating a ram-air effect.

G-Force gave a lot of attention to the fuel supply, kicking things off in the tank with a pair of 255-lph fuel pumps. From the G-Force collector tank fuel travels under the car via braided lines and into the Sard fuel delivery rail. Massive Sard 1,000-cc/min injectors are governed by a G-Force engine management unit. Inside the stock manual transmission is a twin plate Exedy clutch while Ralliart mechanical front and rear LSDs were fitted to cope with the massive 570 hp and 477 ft-lbs of torque.

The handling and braking side of the project was taken care of by Fukuda-san of Sunbeam, a respected suspension specialist working out of a small shop in central Tokyo. Custom-valved Spirit Racing dampers were chosen for the application and coupled to KYB springs front and rear. Ralliart stiffened bushings help take the slack out of the links, promoting more precise and communicative feel through the steering wheel.

The braking was hardly going to be left stock with this amount of performance on tap, so Fukuda-san called up Endless and got them to send over their top of the line Monobloc calipers, 6-pots for the front and 4-pots in the rear. These are joined by floating two-piece discs all round, slotted with the recognizable Endless "E" mark. Sunbeam uses Volk Racing TE37 wheels for their amazing strength and low rotating mass, plus you really can't argue with the way bronze Volks look against a white body! The 18x10.5-inch rims are shod in new Advan A050 semi-slick tires that measure 265/35R18 all around. The last piece of the puzzle was left up to Varis to take care of, and by the looks of the car, Varis did it in its usual abundance of carbon style. Everywhere you look, there are superbly crafted carbon-fiber pieces, helping shave off unnecessary weight from critical areas of the car like the hood, doors and trunk. The rear doors are actually made of one single piece of carbon fiber and weigh in at less than 10 lbs each. The front doors use a lexan window riveted onto the CF door to also drop enormous amounts of weight over the stock counterparts. The aero kit is a new release from Varis, which includes the front bumper and side skirts while the massive GT wing and the underskirt diffuser are available as add-ons.

Functionality is the key word in the interior, the raw semi-dry carbon inside finish of the doors reminding you this is not your regular tuned street car. Recaro buckets and Takata belts offer the support needed to hold the driver in while instrumentation is kept simple, thanks to the addition of a Racepack IQ3 data logger, which joins the HKS EVC boost controller and HKS cam timing module. A nice touch is the stock S-AWC controller clipped onto one of the spokes of the Nardi steering wheel, allowing Taniguchi full control of the preset modes of Mitsubishi's 4WD system.

Building a successful time attack car is far from easy, but by combining forces Varis, G-Force and Sunbeam have created the perfect showcase for their skills and products. This EVO X is a car enthusiasts can relate to, which aside from the unquestionable skills of Taniguchi, has no prohibitively expensive prototype parts that help make it so extremely capable around Tsukuba. You, too, can build this car-just be prepared to open up your pocket book.