Jacob Barnes And His Partner At Tuned Perfection Autosports Pulled Out All The Stops When Building This Track-Ready '05 STI. 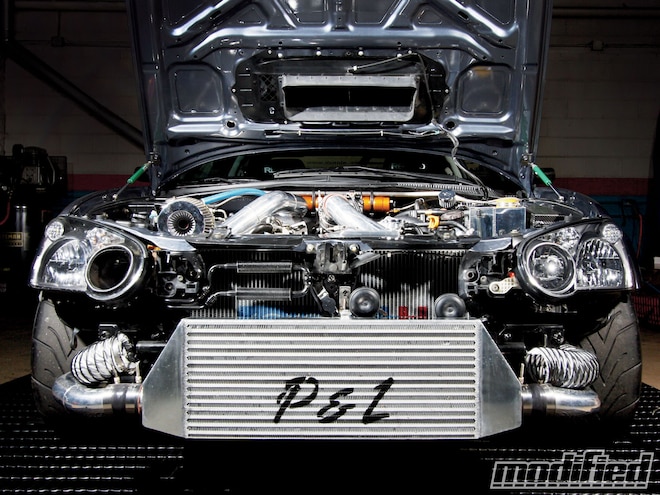 If someone smarter than us journalism school rejects at Modified ever did a proper survey of our readers, the data would probably show that a good number began modifying their car for show rather than go. Maybe it's because as teenagers we're all looking for an edge in that time-honored mating ritual of hard parking at the local hangout, or maybe it's because we're too broke to afford any genuine performance parts (or a car worthy of them). But as time marches on, we all tend to graduate to better cars - the dream machines we coveted as teenagers - and set about modifying them for serious performance purposes. 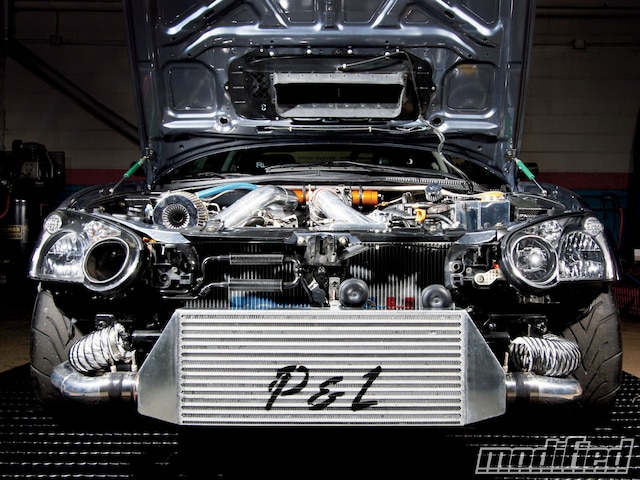 Jacob Barnes, who lives in the small town of Morenci, Michigan, near the city of Toledo, Ohio, fits this profile to a T, having been into cars as long as he can remember. While in high school in the late '90s he built a pretty radical Infiniti G20 show car with a crazy House of Kolor color-changing paint job and all the custom audio he and sponsor Polk could stuff into it. As time passed, Jacob's taste in cars and tuning goals changed, finding himself drawn to the AWD turbocharged performance embodied by Subaru.

Having graduated from college in 2002, Jacob found a solid government job and put in an order for a brand-new '04 WRX sedan. According to Jacob, "That car didn't stay stock for very long as I quickly modified nearly every aspect of it. I went with a very clean JDM theme for it, but later that same year the STI came out and I was determined to own one."

After enjoying his WRX for a while, Jacob sold it in 2007 and began the search for a clean STI. "I really liked the '04-05 STI body style, and since the '05 had many improvements over the '04, I focused my efforts there. Eventually, I found a bone-stock black '05 STI in Texas with low mileage but a few dents on the exterior. I talked to a friend of mine, Nick Eschhofen, who is an expert in paint and body repair; originally, we were going to keep it stock and just respray the car in its original color, but one thing led to another and I ended up contacting Peter at APR Performance, who supplied me with a full 16-piece widebody kit." 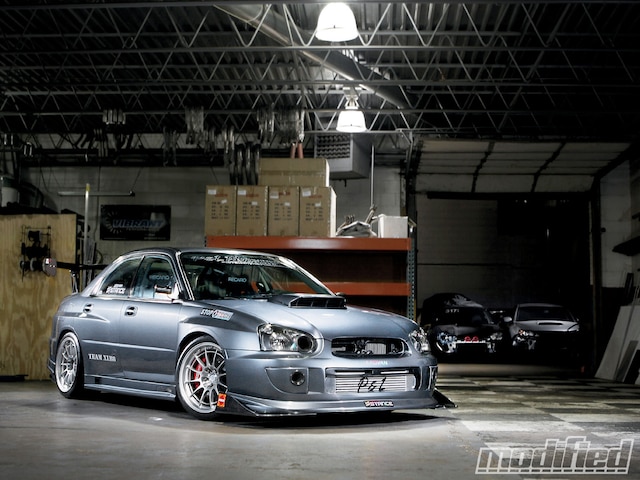 Jacob was drawn to the APR kit because it maintains the STI's stock body lines but broadens its shoulders by 4 inches. Rather than going with a boy-racer color, Jacob opted for a rare European Subaru tint called Steel Blue Mica. As you can see, Jacob's body man, Nick, completed the body work and paint to a better-than-OEM level of fit and finish, having put more than 600 hours into the project. Jacob chose this color because he felt it's subtle and clean while providing a different appearance than any of the standard USDM shades. They finished off the exterior with a Voltex rear diffuser, a JDM STI Spec C lightweight aluminum trunk and an APR GTC-300 wing, along with seriously wide 18x10.5-inch Enkei NT03+M wheels wrapped in 295/30-18 Advan A048R rubber.

According to Jacob, "Other than the paint/body work and ECU tuning, I have done all the work on the car, many times with help of a good friend and big-time Honda guy Stephen Buie. Stephen and I have spent many hours on the car getting everything just right." Tough to argue with the quality of this dynamic duo, who've started their own part-time tuning shop called Tuned Perfection Autosports (see sidebar on page 39 for more info on their shop).

Since Jacob plans to compete in time attack with his STI, he knew he'd need some serious dampers, so he ordered a set of Stance USA's three-way adjustable coilovers with remote reservoirs. He also stiffened up the chassis considerably with a full complement of braces and tie bars from Cusco as well as Whiteline adjustable lateral links, larger diameter antisway bars with spherical endlinks and JDM STI Spec C pink trailing arms with spherical bearings and a custom track-oriented alignment.

Time attacking a 3,200-lb Subaru requires some hefty stopping power, and although the OE Brembos are pretty serious, Jacob knew he'd need something even more hardcore if he was going to fearlessly blitz the braking zones at Mid-Ohio Sports Car Course. With six-piston StopTech big brakes (recently upgraded to StopTech's Trophy Series six-piston front and four-piston rear) Jacob's Subie should have more than enough swept area and heat sink to handle even the most tortuous of braking zones.

To produce competitive time attack horsepower, Jacob went in search of a high-quality turbo kit that was complete and easy to install. He eventually settled on P&L and its GT3076R rotated turbo kit along with its reverse manifold intercooler setup. Once he installed the kit and all the supporting go-fast goodies you'd expect, Jacob trailered the car to P&L in Chicago and had Jorge tune the Cobb AccessPORT. With a safe pump-gas tune producing 407 whp and 356 wtq, Jacob already has a spare EJ25 that he plans to have P&L build for a targeted 550 whp. "I found the quality of the parts at P&L to be amazing, so the engine build will include a full array of parts from P&L including its built short-block and their new high-flow P1 heads."

The interior of Jacob's Subie is all business, having gutted the trunk and replaced the heavy OE reclining seats and three-point seatbelts with Recaro Profi SPG fixed-back racing buckets and Takata harnesses. A little of Jacob's show car background does show through with the UK-imported Recaro fabric the door panels and rear seats, but lightweight carbon-fiber block-off plates for the stereo and rear seats have subsequently been added. The Auto Power roll bar is a solid step in the right direction when it comes to on-track safety, but Jacob plans on installing a full rollcage in the near future. 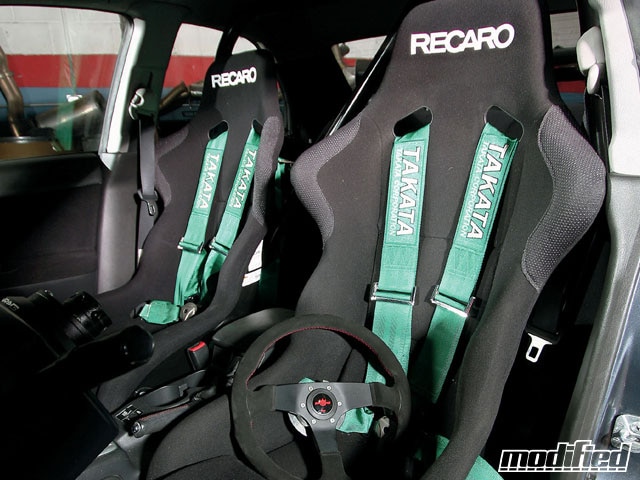 According to Jacob, "I wanted to build the ultimate performing STI while still looking good at the same time. I wanted a car that would excel in all areas." Already a well-known build within the online Subaru community and having turned some test laps at Mid-O, it would seem that this 29-year-old Midwesterner is well on his way to achieving his goals and living up to the name of his shop.

Worth Knowing Jacob and his homeslice Stephen Buie started Tuned Perfection Autosports as a side business to their day jobs, specializing in acquiring used Subaru STI parts and rare JDM STI parts. They've also parted out some wrecked STIs and have rebuilt a few as well. They also do all the usual installations of OE and performance parts, so if you happen to live in the Toledo, Ohio, area and are in need of a little tuning help, don't be afraid to look these guys up!

Worthknowing
Like a lot of us, Jacob Barnes' '05 STI isn't his first modified car. It all started for him back in the late '90s when he built his Infiniti G20 into a full-on show car. Then the GD Impreza WRX converted him into a go-fast, JDM-style tuner, which he parted with in 2007 to build this month's cover car. 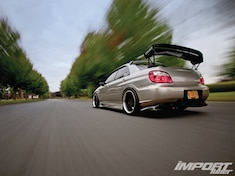 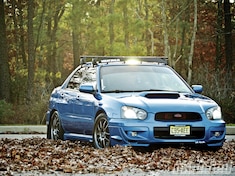 Click to read about Chris' experiences with his 2005 Subaru Impreza WRX. I started to look for cars and came across the Subaru WRX. I had no prior knowledge about Subarus, so when I purchased my car it quickly became a learning experience. - Modified Magazine 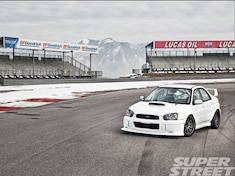 2005 Subaru Impreza WRX STI - The Fairest One Of All

Over the past year of owning the car, Bryant had to deal with more than his fair share of problems—there were a lot. Click to check out Bryant's 2005 Subaru Impreza WRX STI. - Super Street Magazine 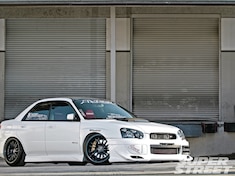 we as enthusiasts can breathe a collective sigh of relief because there are guys like Dennis Kongvongsai. You don’t know Mr. Kongvongsai and that’s okay. All you need to know about him is that he is responsible for this 2005 Subaru Impreza WRX STI. - Super Street Magazine 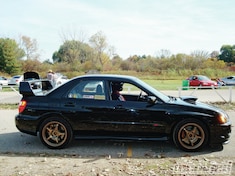 Check out TJ Krause’s ’05 Subaru Impreza WRX STI, it’s funny how the purpose of a car can morph over time, as we can see with TJ’s STI. Once intended to be a daily driver, his car is now more like a track monster, with its massive torque figures. - Modified Magazine 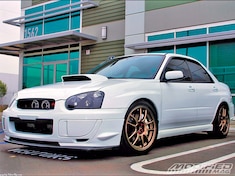 Complete with style and performance, Chris Thys' Subaru WRX STI is one clean Subie we can't get enough of. Check out his complete modifications list in Modified Magazine's. 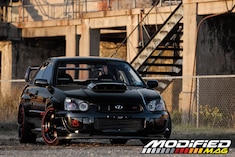 Al Castorino grew up on classic muscle cars but that did not stop him from owning the modern day Japanese Muscle car, 2005 Subaru Impreza WRX STi, and getting over 420 hp and torque out of it. - Modified Magazine