Jonathan Dawes' '94 Toyota Supra Will Turn Your Head And Stop You In Your Tracks. 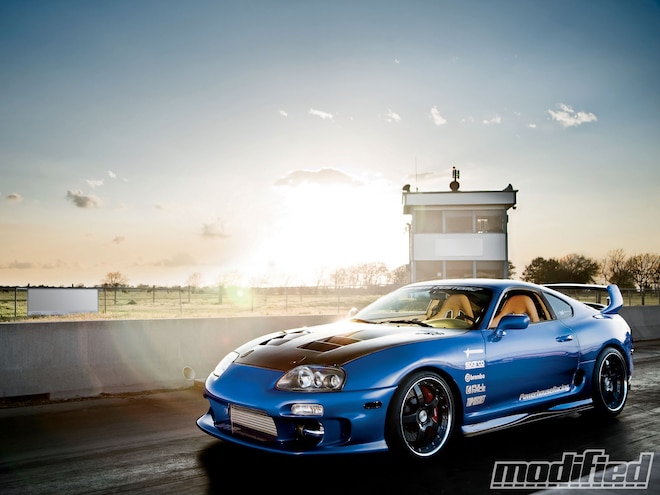 It can be difficult to stand out from the crowd these days. We all know that familiar feeling of walking through a car show or meet and thinking to yourself that it seems like everywhere you turn, there's a car that looks like something you've seen a hundred times before. Where's the creativity? 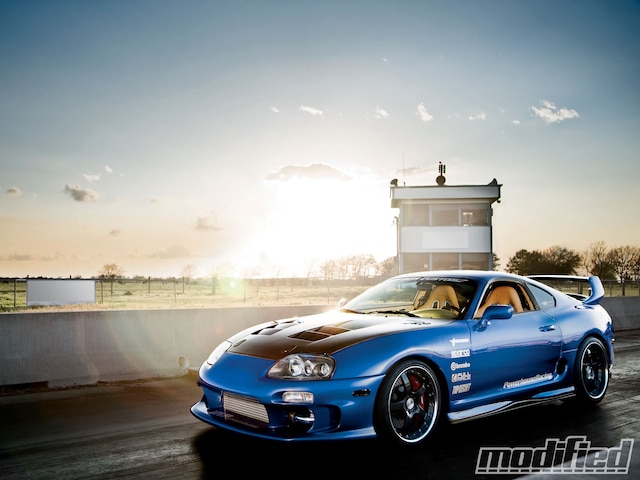 Just when you're about to throw in the towel in frustration, all of a sudden it happens - you see the car you've been waiting for. A car that actually makes you stop and look to examine the details and build quality. Something so clean and well done that even though you've seen dozens of other examples of the same car that day, this one stands out. Jonathan Dawes' Supra is this car. In a sea of MKIV Supra monotony, it's a bight-blue, carbon-fiber-clad beacon of hope.

Jonathan knows firsthand how hard it can be to realize a vision in a scene like the Supra crowd. On one hand, you have the four-figure-horsepower street cars that usually look stock; then there are the full-on drag cars, the circuit racers, the show cars and the cars that kind of fall short on all of these categories. With this in mind, Jonathan set out on the path to create a Supra that instead of settling into one category, surpasses all expectations - and does well across the board.

"When I bought the car in October of 2008, it had some aftermarket wheels and a single turbo conversion kit on it," Jonathan says. "It was pretty much stock and I knew I wanted to rebuild the car from the ground up, so I didn't really care what color the car was when I bought it. I knew right off the bat I wanted to spray it my favorite color: Viper Blue."

And so it began. But don't think Jonathan made any hasty choices; he made sure to do his research before jumping into the build.

"I started looking through magazines and online forums, trying to figure out what kind of power I wanted to make, what I wanted it to look like and who I wanted to enlist to help put the car together," Jonathan says. "I decided that I wanted to have the car as just the best all-around car. I saw so many cars that were all overboard in one aspect. All show and no go, or strictly race built. I wanted something that is pleasing to the eye, comfortable to drive normally, but that you can also take to the strip and beat on people with."

A choice like this makes for a very involved (and expensive) build - after all, if it were easy to build a car that kicks ass in every category, we would see them all the time. So what makes Jonathan's Supra special? The net result of all the parts is more than just a good-looking car. It's a damn good-looking car, and it moves too.

"So many people buy the same 'power package' of parts, put it on and we [the Supra crowd] all know it works. I wanted to take that common knowledge and build upon it by putting something together that would take things to the next level. I wanted a range of products that would make the car really unique," Jonathan says. Turning to Joe Lamb and the respected tuners and engine-builders at Powerhouse Racing in Bridgeport, Texas, to handle the motor build, Jonathan knew he was in good hands. "I wanted something that could make good power, but had the quick spool time and driveability of a smaller turbo," he says.

The motor itself is a HKS-stroked 3.4-liter, built by Powerhouse. The addition of a Sound Performance quick spool valve and the use of a 70mm trim Turbonetics turbo help make the car quick off the line and extremely fun to drive, which is exactly what Jonathan is going for. Another addition, the Powerhouse Racing Stage 5 CNC race head is a pretty sweet upgrade over factory; this little number will cost you the better part of the initial purchase price of a clean MKIV Supra, in fact. All tuned and dialed in, the car puts down a nice 670 rwhp at 18 lbs of boost on a conservative tune. Not a crazy-high number, but Jonathan's car is not a dyno queen. He actually drives this thing on street tires.

"I'm completely addicted to carbon fiber," Jonathan says with a laugh. "Dusty Womack of MVP Motorsports in Bridgeport, Texas, was able to source all the authentic JDM CF pieces on the exterior of the car." No easy task, considering how hard some of these parts can be to find. The car's exterior has a nice clean show look to it, but it's not overboard.

We like it because the car has been done up in the right areas, and the aero choices flow nicely with the OEM lines. The MKIV Supra is a good-looking car from the factory, and all too often people mess it up by choosing gaudy or poorly designed parts. The Top Secret kit and RRM wing look right at home, though. The factory red paint is obviously long gone, thanks to Kyle at Top Gun Customz in Alcoa, Tennessee. As Jonathan's go-to paint guy, Kyle has worked on several other projects in the past. The results are jaw-dropping - there isn't a single flaw on the entire car. The Supra literally looks as good in person as the photos make it out to seem, which isn't always how it works out.

The wheels on Jonathan's Supra are pretty crazy also; they're custom pieces made specially for him by 360 Forged Wheels. We know they're 19x9 inches up front and a massive 19x12 inches in back, but the offsets are a secret for Jonathan's eyes only.

On the inside, Jonathan has again taken a unique route by opting to go with a tan interior. Most people gag at the thought of tan, but take a look for yourself. It fits nicely with the blue and CF exterior, and just in case you're not a Supra geek, this interior has been fully converted and customized. Jonathan has dyed, painted and upholstered his way from the factory black interior to what you see here today. The dash itself is actually a Torasport carbon-fiber piece, deceiving under its milky tan skin, and the entire interior has been updated to LED lighting for a more modern look. Overall, the interior is very classy and clean, not tacked together or cheesy at all.

Like any project car, the build process is never really done. The car is actually under the knife again right now. Jonathan hopes to make 700 whp on pump gas, a feat very few Supras accomplish. The goal of 1,100 whp on race fuel (however lofty it may sound) seems like a legitimate possibility considering the team Jonathan has at his disposal. We can't wait to hear about the car as his build progresses even further. So to those out there who are thinking about building a Supra, take an example from Supraman Jonathan Dawes and his stunning MKIV.