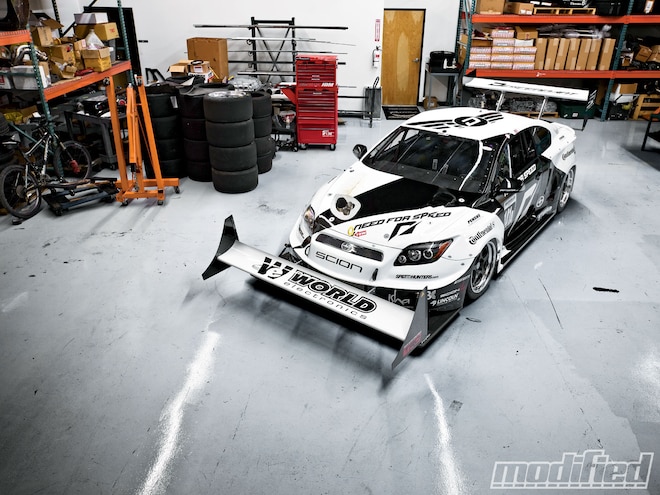 Christian Rado and WORLD Racing are, no doubt, names you're familiar with. Chris and his team have been setting records on the dragstrip for more than a decade, and more recently they've been blowing away FWD time attack records in their famous Fwing Scion tC. It wasn't long ago that GM's FWD time attack record of 1:51.381 at Buttonwillow Raceway with its highly modified Cobalt SS was considered unbreakable, but last year Chris piloted his front-winged Scion to a mind-blowing 1:49.703, shattering GM's record and breaking the vaunted 1:50.000 barrier in the process. 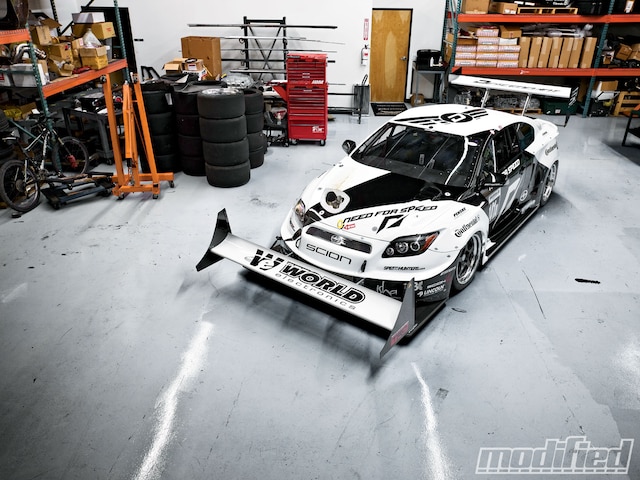 Some teams would be satisfied with this type of achievement, but Rado's WORLD Racing thinks big - really big. We're talking world domination big. Forget about FWD records, these guys want to take overall time attack event wins and reset the fastest lap time records - not only at local tracks like Buttonwillow but around the world and at the home of time attack, Tsukuba Circuit in Japan. To realize goals this lofty, a ground-up build of a world-class racing machine would be necessary, and the 19-month, 20,000-man hour build of WORLD Racing's new AWD Scion tC began.

According to the fearless Mr. Rado, "I knew we weren't going to be able to beat all the RWD and AWD cars with our FWD Scion. We've come pretty damn close now, but the lack of grip from a FWD platform is just too much of a limiting factor. While talking with Rod Chong from EA Games, he asked me what I was going to bring to the global time attack event they had planned. That's when I knew it was time to take it to the next level and build a car that I could race against the best from around the world. And I didn't want to just build something new, I wanted to build what I think defines speed in a piece of metal, composite and rubber. If you were to ask me today what my ultimate definition of speed is, you're looking at it."

A truly next-level build, this AWD beast began its life as a stripped and seam-welded '10 Scion tC, a process designed to remove as much weight as possible from the chassis as well as stiffen it. Fully caged at just over 2,200 lbs (with driver and fluids), mission accomplished. Chris also wanted the chassis to be significantly more rigid than the Fwing tC because engine builder Gary Kubo put together an updated Descendant 2AZ-FE engine package that's capable of producing as much as 1,500 hp and more than 1,000 ft-lbs of torque. The 5-stage dry sump engine oil system, using a mechanical vacuum pump, is designed to ensure engine reliability while freeing up close to 200 additional ponies at extreme boost pressures.

This insanely powerful engine, designed around a low boost setting of 35 psi, a scramble mode in the 45-55-psi range and a "Booya!" button that maxes boost out at 65 psi, has been built around Turbonetics' new 76mm billet series turbocharger. According to Chris, "Turbonetics' billet technology, which has all-new aerodynamics for much-improved efficiency, as well as using stronger materials, is really the first turbo we've come across that can withstand these types of boost pressures. We're really happy with what Turbonetics is bringing to the table."

According to Chris, driving a car this powerful (having most recently produced 1,007 whp and 890 wtq at 50 lbs of boost on a 4WD Dynojet) is a very unique experience. "We've got the brake pedal and the throttle pedal spaced really far apart, so they line up with my right and left legs when they're stretched out. I only brake with my left foot, and since I always want to be on the gas to keep the big 76mm turbo spooled up, I've really had to adapt my driving style to make this car work. I've got the upshift button and the scramble button on the right side of the steering wheel, and the downshift and Booya button on the left side. This way I can upshift on the right while holding down the Booya button on the left."

Speaking of shifting, the entire build was centered on a custom Weismann all-wheel (WAW) transaxle, a unit originally designed for the K-Pax SPEED World Challenge GT Class Volvo. Perhaps the most unique feature of the WAW transaxle is the Weismann Center Locker, originally developed for the Lasso 6x6 military vehicle with the purpose of eliminating the common 70/30 split planetary and viscous center differentials. This design has resulted in a tremendous weight and rotational mass savings, plus with the Center Locker's unique mechanical torque sensing ability, it instantly biases torque between the front and rear wheels proportional to the traction available at each wheel. Sequentially shifted and with easily accessed dog gears for quick changes to their ratios at the track, this is literally one of the most advanced transaxles on the planet. According to team manager Rob Cardona, "The Weismann's are mad scientists! They designed a unique bellhousing for our project that allows us to use the OEM Scion tC starter motor and flywheel ring gear, plus they machined the housing deep enough for our 3-plate Tilton clutch and hydraulic release bearing."

Just like in the K-Pax Volvos, the Weismann box was carefully located on the centerline of the WORLD Racing Scion such that front driveshaft lengths are equal, ensuring zero torque-steer while eliminating any need for a jackshaft. In order to send power to the rear wheels, a custom rear subframe and five-way-adjustable rear suspension was built, allowing the use of a Winters Performance quick-change rear differential. The Winters rear end is connected to the front Weismann Locker via a Mark Williams lightweight prop shaft, which travels down the OEM center tunnel (normally occupied by the exhaust).

Interestingly, the front wing has been mounted much lower than on Chris' FWD car. Although some of you might be thinking aerodynamicists Barnaby Wainfan & Ron Mathis did this for some wind tunnel- or CFD-proven reason, the truth is quite the opposite. According to Rado, "The front wing is way more efficient mounted up high like on the Fwing car, but we didn't want this car to look the same. We also felt we could get away with less front downforce since the AWD setup means we'll be generating a lot more grip and sending a lot of power to the rear tires, so we shouldn't need as much front downforce to put the power down."

The extra-wide, carbon-fiber body, built by Josh Solis at Tru Carbon then installed by Paul Rivera and Scott Stanwood at NuMovementz in California, is quite similar to the work they did on the Fwing car. There are some subtle changes to the panel shapes, though, and there are also new fully integrated NACA brake ducts on the front and rear fenders and a fully functional rear diffuser. The underbody aero package is also new, using a custom 48x78-inch Tru Carbon 1-inch-thick splitter to go along with the Kognition front and rear wings. The striking black and white "Team Need For Speed" livery, cooked up by Sergei Podosenov and WORLD's in-house design team KAYA Creative, also helps distinguish the new AWD beast from its older FWD brother.

What started out as a conversation with Speedhunters head honcho Rod Chong about what sort of car would be needed to win a global time attack championship has, in less than two years, turned into what is undoubtedly the most extreme time attack machine ever built. Best of all, Christian Rado and his WORLD Racing crew made sure to build their new Scion such that it's eligible to compete in every major time attack series around the world, so don't be surprised when records start to fall at tracks as far flung as Silverstone in the UK and Tsukuba in the motherland. With a car this wild and the biggest speed freak on the planet at the helm, world domination is just a matter of time, and we don't expect to be waiting long.

FiveAxis has been building extreme Scions since Day 1; the company's latest creation being this widebody '11 tC unveiled at the NY Auto Show.