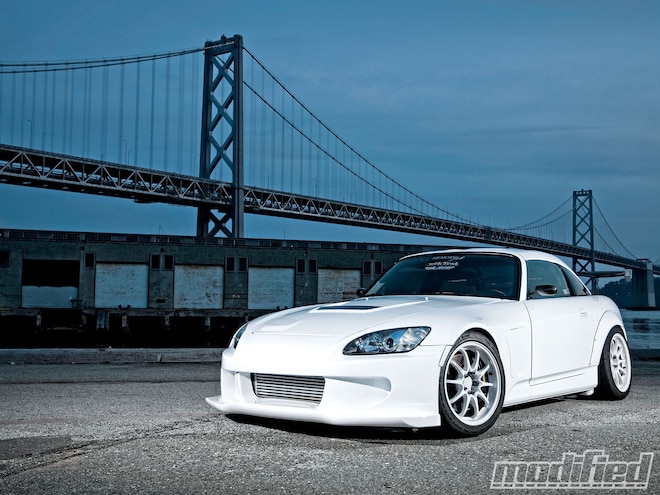 The Japanese have produced some really amazing cars over the years. Their uncanny ability to engineer lightweight, nimble, 9000-rpm screamers is something many JDM purists hold high above the straight-line grunt of muscle cars or the techno-wizardry (or oftentimes, techno-failure) of a European car. Without a doubt, the Honda S2000, may it rest in peace, is one of the best raw and pure Japanese cars in recent memory. In an era of sluggish econoboxes, automatic transmissions and economy boosters, the S2K was a beacon of hope for the performance segment. 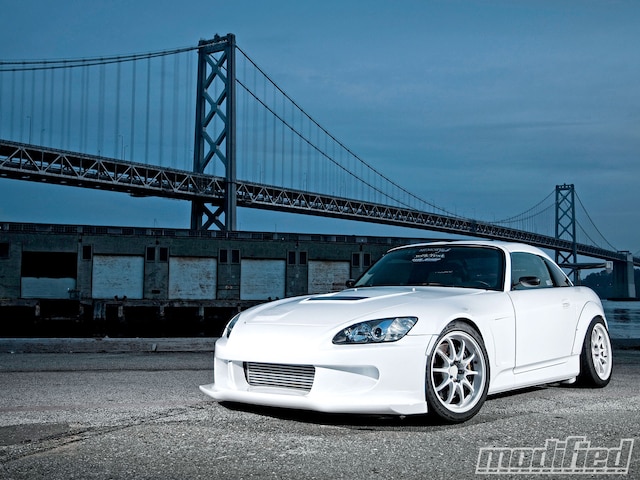 Designed by the same man who brought us the now legendary NSX, Honda's S2000 - with its sharp handling, smooth styling and sub-$30K price tag - has been embraced and loved by enthusiasts worldwide for its natural abilities around the racing circuit, as well as the pure "cool factor" on the streets. But as we know, there's always room for improvement. Even though the S2K is an extremely capable car straight out of the box, what fun would it be to leave it alone?

What we have here is a truly fine example of what a properly tuned street- and track-friendly FR layout Honda is capable of. Brian Lee is a man who knows what he wants and doesn't settle for half best. After purchasing the car as a so-called "graduation gift to myself," he got bit by the tuner bug right away. The parts chosen for this build are astounding, in both quality and quantity - in typical Honda-enthusiast fashion, no area of the car has been left untouched. At first glance, Brian's AP1 grabs your attention with its striking ASM body panels and aggressive J's Racing carbon-fiber GT wing. With vents, ducts, diffusers and aerodynamically functional design cues top to bottom, there's no question that the car looks great, and we know the exterior upgrades actually help increase performance as well. ASM has been campaigning its S2000s in racing series across Japan for the past few years, as well as numerous street-driven cars on the other side of the Pacific. Brian draws his inspiration directly from these amazingly dialed in examples of engineering and ingenuity; he has even gone so far as to pick up the famed four-figure-priced ASM Titanium tow hook, a piece that we've never actually seen on a street car before. A Mugen FRP hardtop helps provide an additional touch of flair and function, helping improve airflow across the roofline over the stock rag top while also reducing overall vehicle weight. Plus, it's Mugen, and we like Mugen. A white Honda is somewhat of an icon in of itself, but what you might not notice straight off is that Brian has gone an interesting step further and re-sprayed the car not in Championship White but in a much less common color. Lamborghini Bianco Isis white has been chosen as the exterior color for its rare factor, while still maintaining a classic true white Honda look. It's the little things that really seal the deal with Brian's car.

On the suspension side of things, this S2K is properly equipped, to say the least. Öhlins Flag-S coilovers have been paired with upgraded custom-rate Hyperco springs, but that's not all. In the ultimate pursuit of function, Brian has had the shocks re-valved to his own specifications by Performance Shocks Inc of Infineon Raceway. This is pretty serious stuff here, folks - not the kind of service usually performed on street-legal road cars. A set of AP big brakes helps the car screech to a halt on command, another high-end performance upgrade not seen often enough. Brian loves his Honda, and with good reason. Not only does the car handle on rails and break the necks of many a longing JDM fanboy - it can move, too.

Under the hood you will find a plethora of go-fast goodies, starting with the most obvious, a Comptech supercharger kit. Air is sucked through a HKS "mushroom" filter on to the ScienceofSpeed upgraded supercharger and into the stock-block, with engine management handled via AEM's tried-and-true EMS. As you would guess, Brian doesn't want a dyno queen; the F20C is an extremely good motor from the get go, so there's no real need to go crazy with it. However, fearing the opposite and all too common "gutless monster," Brian is happy with his setup. The amount of power is just about perfect for street driving or track duty, and it's put to the ground efficiently by means of a Competition Clutch stage 2 clutch, flywheel and pressure plate.

Inside the cockpit, Brian is comfortable and informed. A Stack digital dashboard provides all the critical numbers to ensure his baby is running properly, while his hands rest upon a Momo/NSX-R steering wheel. Another bit worth mentioning is the pair of seats Brian has chosen. These rare Recaro/ASM RS-G seats aren't your everyday, run-of-the-mill bucket seats - each one will set you back well over a grand, and you'll probably never see another car with the same setup except on the pages of a magazine or on a racetrack in Japan.

With such good taste and attention to detail, it's easy to understand why we love this car. The best part is how it shares its time between the street and track without missing a beat, a perfect combination with the perfect platform. Is this the perfect S2000? That much is arguable, but Brian's is damn close, and it's damn cool regardless.