The F20C In This S2K Has Been Ditched In Favor Of Good Old-Fashioned American Muscle. 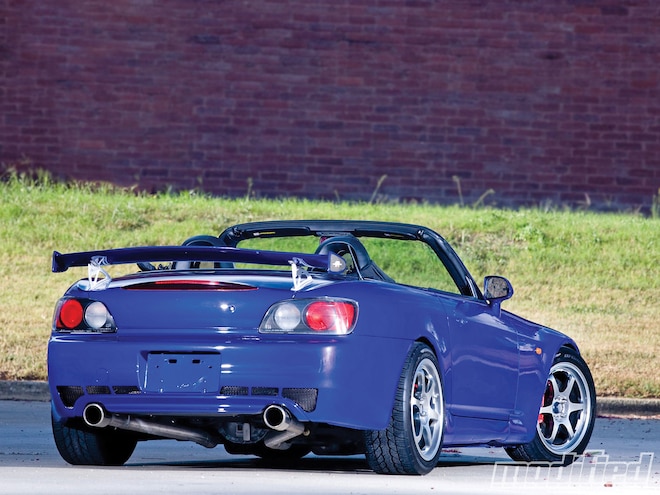 No, the world has not ended. If you turn your eyes to the sky, you won't find the Four Horsemen of the Apocalypse riding through fire and brimstone, nor will you see pigs with wings high above. Although, considering the car we see on these pages, the assumption is warranted. After all, the coveted Honda S2000's F-series motor is (arguably) one of the best 4-cylider engines ever made, so why would anyone choose get rid of it? The answer is simple actually - double the number of cylinders, double your fun!

Jason Kovach is a man with a plan. Having started his automotive tinkering as an audio guy back in the early '90s, he has seen it all throughout the years. "I've had Hondas pretty much my whole life," Jason says. "My first car was an '83 Prelude, and then I went to a Civic. Now I own two S2000s and my wife drives a Pilot." Brand loyalty is something we like to see, so then why the choice to seemingly taint a perfect record by throwing a Chevrolet motor into the mix?

"I like to tinker, to do stuff that people say can't be done," Jason tells us with confidence. After seeing a S2000 with an LS1 in its bay online (not a running swap), Jason found himself inspired. After discussing the idea with a friend at work - a friend who also happens to be a retired GM mechanic - the idea was all but solidified in his mind. Jason began the search for a good rolling chassis to start the project. In a strange twist of fate, it was actually the owner of the aforementioned LS1-endowed S2000 that Jason had seen online who contacted him, and after a 29-hour road trip from Atlanta to Oklahoma City, Jason had an ideal clean chassis on which to begin the swap. After sourcing a motor and transmission (another long road trip), the build was ready to begin. 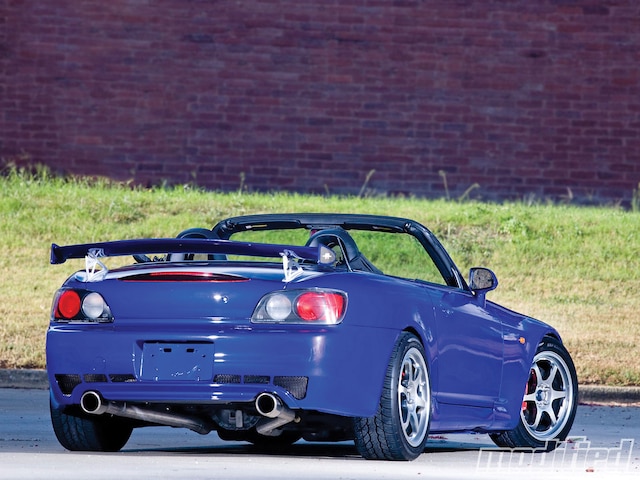 The actual fitting of the large 5.7-liter V-8 into the S2000 bay was not all too difficult, Jason tells us. By removing unnecessary accessories like air conditioning and power steering from the motor, Jason found the V-8 fit snugly, but nicely. "[The swap] had its moments, but it actually fits in there really well," Jason says. "I can work on the entire motor without a problem. It doesn't have a bunch of extra stuff under the hood because it's all been relocated. If I pull off the headers and radiator, I can remove the entire motor and transmission by myself."

Because there were essentially no other known V-8-swapped S2000s at the time, Jason was leading the charge with his project. This is good in some ways - it's nice to be original - but at times it can be aggravating to not have anyone else to ask questions to. "That was the hardest part of the project, not having anyone to ask questions or get advice from," Jason recalls. The Chevrolet V-8 motors come in several flavors, varying in size, power and some offering superchargers. The nice thing about swapping these motors into non-GM chassis' is that all of the various trims are fairly simple to wire up and get running. Jason went with a 5.7-liter LS1 from a 2000 Pontiac Firebird as his starting point; this small-block V-8 was already higher output (and much higher torque) than the stock Honda F20C, but it needed more power to really get the car moving how he wanted. Jason decided to upgrade his block with the larger more free-flowing C5 Corvette Z06 heads, intake and throttle body to really bring the beast roaring to life.

Transferring all the power to the road is a T-56 6-speed tranny, a unit sourced from a Pontiac Firebird donor car. A custom aluminum driveshaft employs a Cobra 8.8-inch Independent Rear Suspension (IRS) rear end with custom axles and Honda hubs, for a near-stock look. Not that anyone would likely mistake the massive Ford diff housing for a factory Honda unit. The suspension is fairly mild, in the form of HKS springs (providing a 1-inch drop) and Eibach shocks. 5Zigen GN+Pro wheels are clean and subtle as well, keeping with the stock sleeper look.

The exterior of the S2000 is also relatively tame, a nice touch considering the massive powerplant under the hood. The engine bay has been completely shaved and filled, over 60 holes in all, and the car has been completely re-sprayed Ruri Blue, a color from the Mitsubishi EVO. An AP2 front bumper has been fitted to the car for an updated look, and the factory hood and rear bumper have been vented for cooling purposes. A Mugen wing finishes off the clean, subtle exterior modifications.

On the inside, Jason has installed custom Alcantara door panel inserts and a few other minor touches like a S2000 CR shift knob, custom shift boot and center console. The most noteworthy mod to the interior is the custom-fit Dakota Digital Dash, a unit originally designed to be used in a '50s-era Chevrolet pickup truck with a LS motor swap. The reasoning behind ditching the stock S2000 gauge cluster in favor of this unit is that not only is it easier to wire the Chevy motor, but the Dakota unit provides more information in more accurate increments to the driver. Plus, it looks right at home with its custom shroud, a winning touch all around.

"People have told me that I ruined a perfectly good S2000," Jason says. "They say it's not a Honda anymore, but really all it is, is a Honda with more torque!" Weighing in at a mere 65 lbs more than his stock S2K daily driver, Jason is loving his car more than ever, and is even considering doing another one in the near future. We can't wait to see what he can pull out of his bag of tricks if he decides to do so!

Thanks To My wife Brandi for not killing me, Joe at JPM Coachworks, Nate at Greene's Auto Body & my friends Allan, Randy & Mitchell