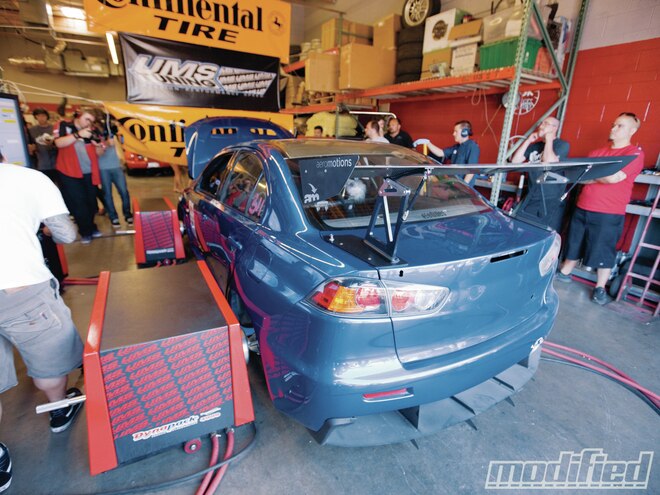 We’ve seen a few cracked intercoolers or blown chargepipes at the Shootout over the past five years, but this year we saw our first on-dyno engine failure. Ryan Gates and his famous Gates311 EVO X made the long haul down from Minnesota to participate in this year’s Shootout, and, sadly, we never got a chance to see it rip down the dragstrip, dodge a few pylons or chase the lap record around Firebird’s Main Course. 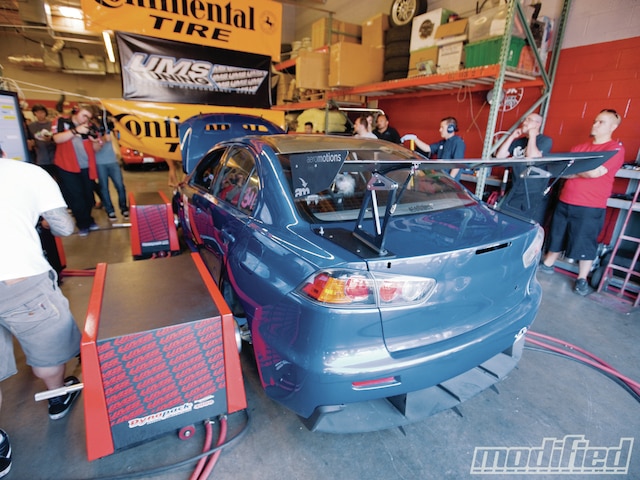 During the dyno competition, it became immediately obvious that something wasn’t right inside the Gates311 4B11T engine. “I was so pumped for the Tuner Shootout, not only because I was honored to be invited, but also because I effectively had a completely rebuilt car. 2010 was a mess for me — I went from winning all of 2009, to not even finishing an event in 2010.

“Over the winter, my friends and I worked on the car in our garage back home in Minnesota. Pretty much everything down to the paint was restored or replaced.

“The week before the Shootout I planned a test session at the Texas Mile. I couldn’t think of a better spot to break-in and test the new AMS 2.2-liter Race engine we installed. Testing went great — we set a new EVO X world record for standing mile at 180.0 mph [gear limited], and the car performed flawlessly. Unfortunately, something must’ve been hurt during those standing-mile runs, since the car was acting up as soon as we put it on the dyno at UMS. Immediately down on power — only 670 whp [laughs] — but the next run dropped over 100 whp with oil pressure measuring scary low. I called it after that, since there was no point in pushing a hurt engine.”

Ryan’s early retirement from the Shootout was a major disappointment, since his EVO would’ve been a serious contender for the overall victory. With any luck, we’ll see this privateer and his Gates311 EVO at the Shootout again next year, and we’ll do our best to talk him out of any Texas Mile madness the week before.