Totally reinvented from our ’09 Readers’ Rides issue, Archie Santos’ EVO X lands on the cover for a second time 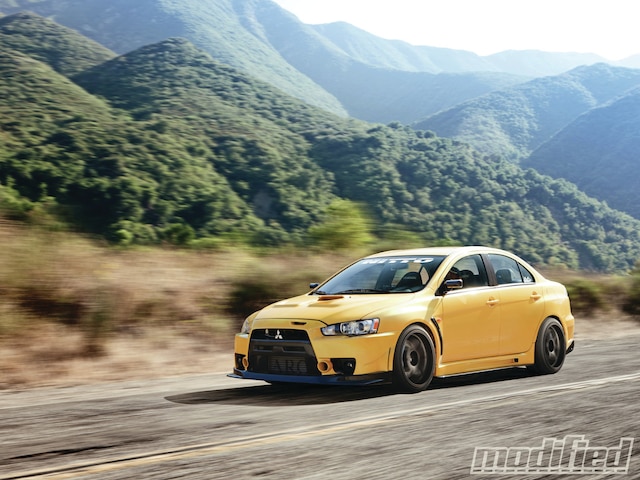 What you’re looking at here is Modified history. Never before have we featured the same car on our cover on two separate occasions, but Archie Santos found a way to so thoroughly reinvent his Mitsubishi Evolution X that we just had to honor his persistence and unique vision with a second cover car story.

If you’re a longtime subscriber or dedicated reader, then dig up your October ’09 issue and take a look at Archie’s EVO X back then, if only to better appreciate what it has evolved into now. In 2009 it was a super-clean street build and featured a host of high-quality JDM goodies like Volk wheels, Bride seats, a JUN front lip and some tasty Ralliart bits and pieces. It was certainly a worthy pick for the cover of our annual Readers’ Rides issue (along with his friend Luis Bicol’s ’08 STI), but nothing too out of the ordinary with respect to tastefully modified EVO Xs.

To get a second cover, Archie knew he’d really have to wow us with something different, something like the FQ400 body kit conversion you see here. Only available in the UK as an ’09 model (and upgrade from the ’08 FQ360 model), the FQ400 pumped out an impressive 403 hp and 387 ft-lbs of torque, and, more relevant to this story, it also featured a completely reworked exterior, including carbon-fiber front fascia, side skirts and rear wing, a redesigned rear bumper to accommodate the center-exit exhaust, and a roof-mounted vortex generator. Archie was actually considering importing a FQ400 from the UK, but with a list price of £50,000 (about $80K USD) and importation headaches galore, he came to the realization that it would be far cheaper to convert his X to FQ400 exterior specs by ordering the individual parts from the UK.

After contacting Ralliart UK to order the parts, Archie learned that you must own a FQ400 and provide them with a VIN number before they’ll sell you any parts. As Archie explained, “This pretty much killed my FQ400 dream, but then in December of 2010 a friend of mine in the UK bought the last of the 150 FQ400s made. I asked him if he could purchase the body kit for me, since they require both a VIN number and a copy of the sales receipt for the car before they’ll sell you any parts for it. He contacted Ralliart UK and ordered the parts, telling them that since he tracks the car he wanted a replacement body kit just in case of any damage. A few months later I had the kit, and, to my understanding, it’s the first and only FQ400 conversion in the United States.” >>

That’s when, during the three-month process of converting his X over to the FQ400 body parts, Archie teamed up with Karl and Al Canta from AA Autoworks. Karl and Al knew that a cover story was far from guaranteed (though Editor in Chief Peter Tarach had told Archie that if the build turned out nicely that a follow-up feature was a possibility), but they were still very enthusiastic about the project and jumped on board as a sponsor. Rather than spraying the FQ400 kit with the factory Rally Red, Karl, Al and Archie agreed that to really make a statement a full color change was needed. Dipping into the exotic car paint codes book, they opted for Lamborghini pearl metallic yellow, a choice that certainly makes a bold statement.

With the FQ400 body conversion completed (along with JUN carbon-fiber rear diffuser and mirrors, Ralliart taillights and carbon-fiber grille cover), Archie decided that to really set off the paint job he’d take another page out of the Lamborghini playbook by bolting up a set of matte-black wheels and stripping off the rear wing for a sleeker profile. That meant selling the Formula Silver Volk CE28N wheels he was rolling on in 2009 and replacing them with an equally baller set of 19x10.5 Advan RG-Ds. The Voltex rear wing from his ’09 feature was also removed and in its place a stealthy Do-Luck duckbill trunk lid.

As unique and eye-catching as the exterior transformation of Archie’s X is, there’s also been considerable changes made under the hood and in the interior. Perhaps Archie needs to have some FQ500 stickers made, because his X is now pumping out a very stout 501.3 whp and 425.5 wtq, thanks to a FP Red turbo upgrade along with Cosworth MX1 camshafts, a CBRD tubular turbo manifold, an AMS wide-mouth downpipe, an Ultimate Racing test pipe and a full collection of ARC hard pipes. “During the process of my build, ARC was filing for bankruptcy,” Archie says, “and I was able to buy the titanium upper IC pipe, short pipe, blow-off pipe, and a very rare Gruppe-M carbon-fiber intake kit for less than half price.” >>

Inside Archie stuck with Bride front seats, but swapped out the Stradia sport seats featured in 2009 in favor of some super-lightweight Gias carbon-Kevlar buckets. He also added Bride upholstery to the rear seats and door cards as well as having the headliner and pillars wrapped in suede. The custom dry-carbon-fiber dash is also an unmistakable change from 2009, as are the full complement of Depo Racing gauges, Sparco steering wheel, Momo shift knob and Polk audio system.

Having found a way to source the virtually unobtainable FQ400 body kit from Ralliart UK, Archie Santos is pretty much assured of having the most unique-looking EVO X in America. That alone makes it a feature-worthy project, but the fact the he went the extra mile with custom paint, a Lambo-inspired wheel choice and engine upgrades that stomp the FQ400 by well over 100 ponies at the wheels made our decision to feature it on our cover for an unprecedented second time a surprisingly easy decision.