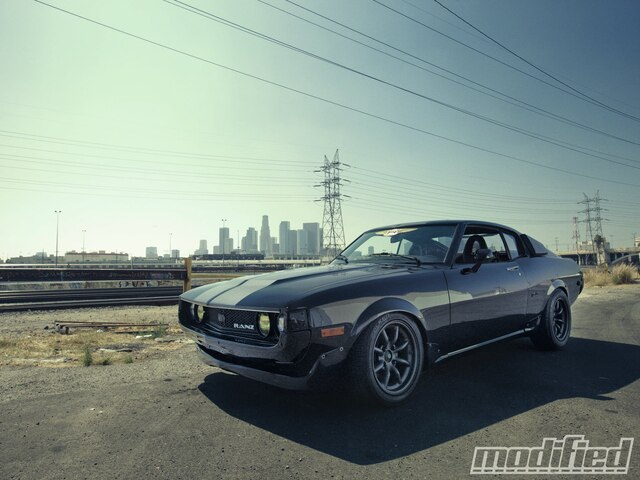 Things were a lot different 35 years ago. In 1976, the Apple Computer Company was founded by Steve Jobs and Steve Wozniak, the first commercial flight using the groundbreaking super-sonic Concorde jet took place, and the Japanese car industry was beginning to boom across the globe. Inspired by American muscle car aesthetic design, Toyota had recently introduced a new model in an attempt to bring sporty RWD performance to a compact package. The Toyota Celica was still a toddler, barely 6 years of age, when this particular example came into existence.

As cool as the Celica was back in the mid-’70s, technology has advanced by leaps and bounds over the past few decades. Classic Toyotas have seen all sorts of motor swaps, one of the more common being the Honda F-series from the S2000. But this is no ordinary S2000 swap — the guys over at Ranz Motorsports have taken it a step further by integrating as many S2000 components as was feasible into their murdered-out, Mustang-inspired Celica.

When I first met with Jay Cabral in downtown Los Angeles to photograph the Celica, I was taken aback by the car’s looks right away. I had seen plenty of first-generation Celicas before, but the complete exterior package of this one really works well as a whole. The front bumper is actually a unit from a pre-facelift Celica (a ’74, to be exact), which has been widened to fit the Ranz car. A front lip spoiler from a E30 BMW 3-series adds another nice touch to the front end, which is finished with custom metal spats and smoked corner lights. A classic-looking dark gray racing stripe brings your eyes along the nicely cowled hood and along the body lines in perfect harmony. As you move along the side of the Celica, another nice addition lay in wait. A set of rear quarter panel vents, sourced from a Mustang fastback, have been modified and custom-shaped to fit the lines of this Japanese classic body. On the rear, JDM taillights and a GT2000 seal the deal. The wheels fit perfectly for the nostalgic ’70s look — can you really beat a set of staggered Watanabe’s on an old Japanese car? I don’t think so.

When you peek inside the Celica, a set of S2000 front seats look appropriately at home. A completely refurbished interior (including door panels, carpet, reupholstered rear seats and a fresh and clean dashboard) looks great, with a few modern touches to add to the retro ’70s flare. An AP2 gauge cluster has been custom fit, along with the pushbutton starter and center console transmission tunnel from the same donor S2000. A Nardi steering wheel and Blitz gauges bring some contemporary JDM flavor into play, and a pair of Takata harnesses finishes everything off.

Because the older-generation Celica was designed in the ’70s, the suspension is a bit on the (dare I say) outdated side. With this in mind, Ranz has updated the handling department of their car in a few minor but appropriate ways. Up front, a set of coilovers designed for a Nissan S13 have been fit to the factory control arms, and Ranz has modified the factory suspension and added AE86 Corolla control arms in the rear for added precision. This car isn’t prepped for racing, but I’m sure it is quite fun to toss around the corners. That’s not entirely because of the suspension, though; the big money comes from underneath the hood.

Most original USDM ’76 Celicas were powered by the Toyota 18R carbureted inline-4, producing around 125–140 hp. This was fine 35 years ago, but a major upgrade was what Ranz had in mind for this Celica. “We love to take classic cars and add a bit of modern muscle flavor into them,” Jay says. The Honda F22C is a fantastic engine, producing the most horsepower per liter of any NA factory powerplant. As many S2000 components have been retained as possible, including the brake master cylinder, throttle-by-wire system and a close-to-factory-style cooling system (upgraded with a Koyo radiator and custom plumbing). The Celica runs off the Honda ECU, which has been tuned for the basic NA bolt-on setup currently residing on the car. The F-series has been praised by many tuners for being one of the best 4-cylinder motors of all time, so we can understand being content with simple bolt-on power-adders. Jay, however, wants more. He tells me that he plans to add a Comptech supercharger in the near future, which sounds like a great way to make this cool car even sweeter.

And that about sums it up for this Celica. With a shop full of cars, a head full of ideas and no limits in sight, we can’t wait to see what else Jay and his guys at Ranz Motorsports have in store for the future with their next build!