Ronald’s EVO is clean and free of any unnecessary fluff. 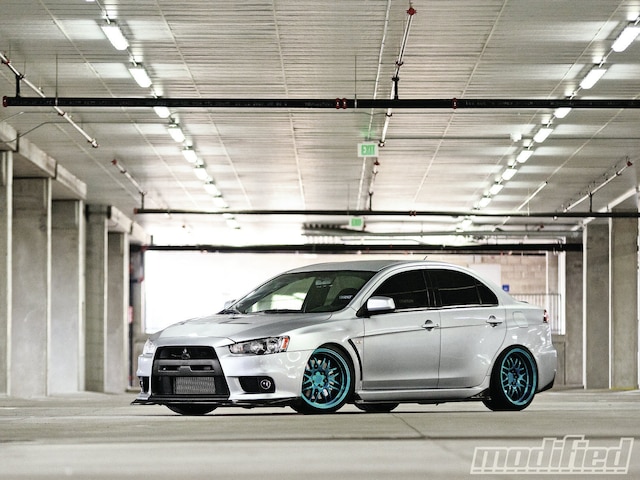 It’s funny how things come to be in one’s possession, especially when it comes to cars. Ronald Vasquez has been the proud owner of several nice Honda cars in his day, yet now he simply can’t be torn from his latest love: the Mitsubishi EVO X.

As a retired Army soldier and general all-around nice guy, Ronald got his first taste of modified cars at a young age. “Ever since I can remember, I have always loved cars,” Ronald says. “My brothers had an older-generation RX-7 when I was growing up, and I was 16 when I got my first car, a ’89 Honda Civic 4-door. I had bought the car from my friend for $500 — it had a broken timing belt and a couple of bent valves. My neighbor and I spent a long time working on the car, and after seeing how excited I was about doing the work, my neighbor didn’t even charge me for any of the help! I think that’s why I still fix people’s cars sometimes and just don’t charge them,” Ronald says with a laugh.

After owning a few more Hondas while he was stationed in Alaska, Ronald finally decided that he needed more from a street car. His 400-plus-whp RSX wasn’t fun to drive, he says, because it would be nothing but wheelspin with that much power in the Florida heat. After an unfortunate accident in his beater car, Ronald and his wife, Romelys, used the insurance money to start the search for something different. After eyeing the AWD turbo scene for quite some time, the perfect car finally presented itself and they bought this EVO X and got to modding. 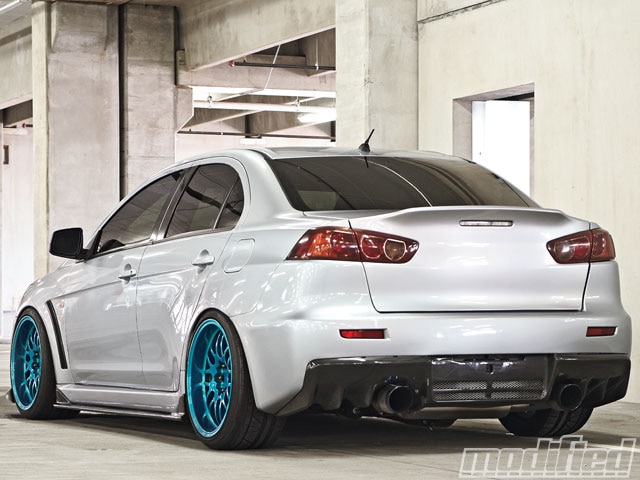 Since this car is not supposed to be a crazy track car, Ronald decided to keep it modest in the power department (for now, at least). An Injen cold-air intake and upper intercooler pipe start off the breathing modifications, with a CNT downpipe, exhaust and test pipe finishing it all off. With the breathing freed up, Ronald can certainly swoop around the streets with plenty of gusto, and perhaps more importantly, he can still get decent gas mileage and reliable factory-like driving characteristics.

A Nardi steering wheel and Works Bell hub setup fit the theme perfectly, providing a bit of flavor to set the car apart from the crowd.

On the inside, Ronald’s EVO is clean and free of any unnecessary fluff. You won’t find any massive stereo upgrades; you will, however, see a set of Bride Stradia seats in the front, a great way of supporting both driver and passenger through the curvy back roads. A Nardi steering wheel and Works Bell hub setup fit the theme perfectly, providing a bit of flavor to set the car apart from the crowd. Another way that Ronald has set himself apart from the usual gang is with the subtle exterior enhancements. A JDP front lip is a nice addition to the already aggressive front end of the X, and the AIT side skirts continue the carbon-fiber theme to the rear, where we’re greeted by a Seibon rear diffuser and Do-Luck trunk lid. A set of massive 19x10.5-inch CCW wheels finish off the exterior department, and as you can see, the color choice is far from subtle. We think that’s OK, though, because Ronald has been so subdued with the rest of his build that some bright-teal wheels actually don’t look offensive at all. He also tells us that he is the first person to have this size and offset (+15mm) in the U.S., and that’s pretty cool.

We hope to see Ronald continue to enjoy his newfound AWD love affair, and maybe in the future he will get back to his heavy modifying roots in the form of some additional horses under the hood. In the meantime, he can continue to roll hard and turn heads with his extremely clean street machine.

Why We Picked It
We like this EVO for a couple key reasons. First, it’s not a crazy widebody or flashy color (aside form the wheels). Second, the choice of body mods works really well as a complete package. And last, the power department has signs that indicate the owner plans to take the build further in the near future, which is good!