Kevin Neely’s ’73 Datsun has the perfect mix of vintage style and modern performance. 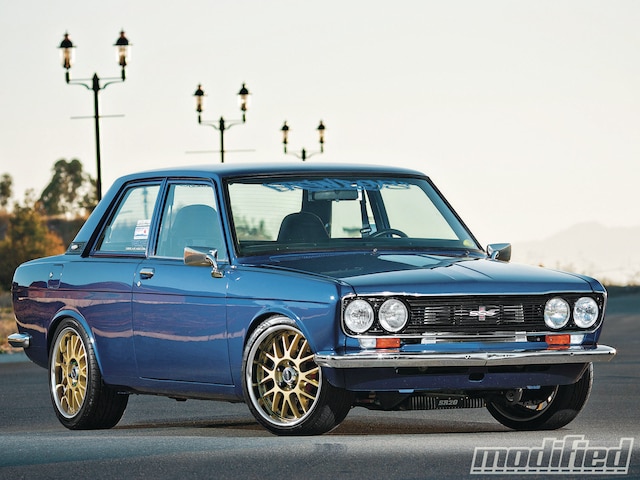 There’s something about Japanese cars from the early ’70s that just hits home in my mind. When you look at the body lines of a car like this 510, there’s little left to be desired visually. The relatively square shape of this small two-door coupe may look dated to some, but in the contemporary world, which by and large is dominated by overdesigned high-tech vehicles, the simple Datsun stands out with its classic framework. Kevin Neely is no stranger to the appeal of vintage automotive styling, and this 510 isn’t his first soirée into the realm of old cars.

“I have been interested in cars since I was a young kid,” Kevin says. “My neighbors owned Datsun 510s before I could drive legally, so I was introduced to cars of this vintage right from the get go. I used to be a diehard Mustang guy back in the day, until I had an encounter with a turbo rotary 510 on the freeway; I sold my Mustang the next day! 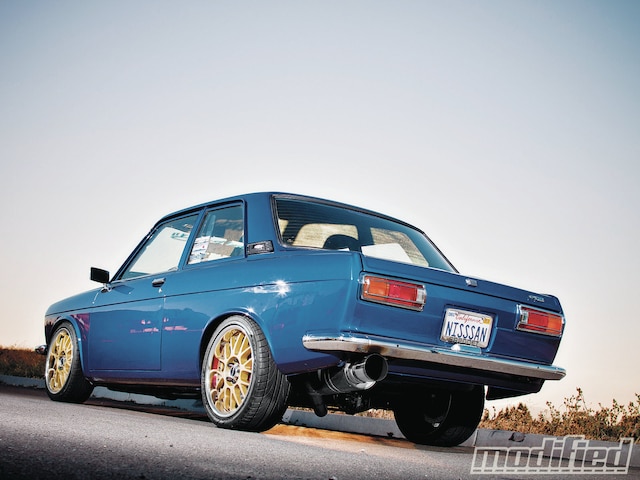 “I had my first 510 with just about every motor configuration you could think of. That’s when I was introduced to Mario Lozano of TSR fabrications in Gardena, California, around the year 2000. He introduced me to the SR20DET in a 510, and after getting a ride in his car, the rest was history. I was able to put a SR20DET into my first 510, but it was a very terrible job,” Kevin recalls with a laugh. Everyone has to start somewhere, and thankfully Kevin didn’t give up after the admittedly less-than-ideal popping of his Japanese automotive cherry. It was Kevin’s early connections to other members of the Datsun and Z-car community that planted the seed for him to build his next 510. “I sold that car to buy my house, but I vowed that one day I would build my dream 510, and now I have that very car!”

On the outside, this Datsun is fairly unassuming. A fresh coat of custom-mixed dark-blue paint keeps the look fresh and clean, with freshly chromed bumpers and a SSS front badge being the only other body modifications in sight. A set of large, 17-inch SSR MS1 mesh wheels fit snugly into the arches of this vintage Datsun, adding a bit of modern flare to the contemporary-styled exterior. However, upon closer examination, there are a few clues as to what makes this 510 a bit more beefy than your normal, everyday ’70s sports coupe. Lurking behind the front grille is the unmistakable outline of a front-mount intercooler, a sure sign that there’s something worth keeping cool under the hood. If you get a little lower to the ground, you’ll also see the familiar “SR20” embossed logo on the front facing side of the GReddy oil pan. 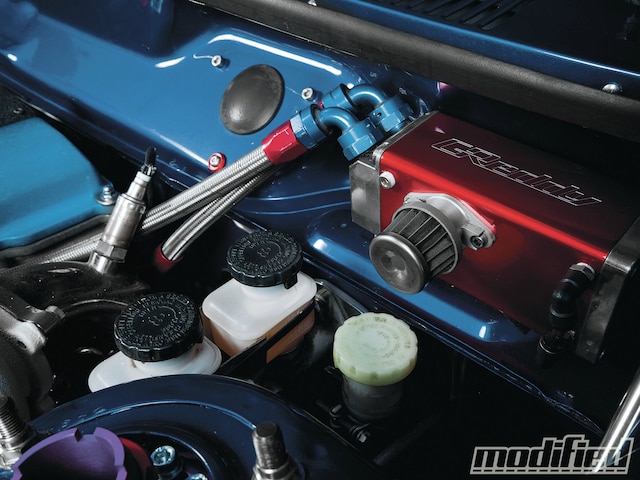 Now that the cat’s out of the bag, you’ll know what to expect after opening the hood of Kevin’s 510, but what you’ll find underneath isn’t your average SR swap; Kevin’s engine bay is so clean, you could quite literally eat off it. The custom-painted valve cover on the S15 swap stands out against the blue-purple paint of the bay itself, which has been completely shaved and smoothed out for extra aesthetic points. Custom lines and fittings to the GReddy catch can lead your eyes across the array of polished pipes and, of course, the GReddy 3037S turbocharger itself. Kevin’s car is good for 384 horses to the rear wheels, power that is transferred through a six-speed S15 transmission, a Quaife limited-slip differential, a Nismo clutch and flywheel, and custom TSR Fabrication axles. 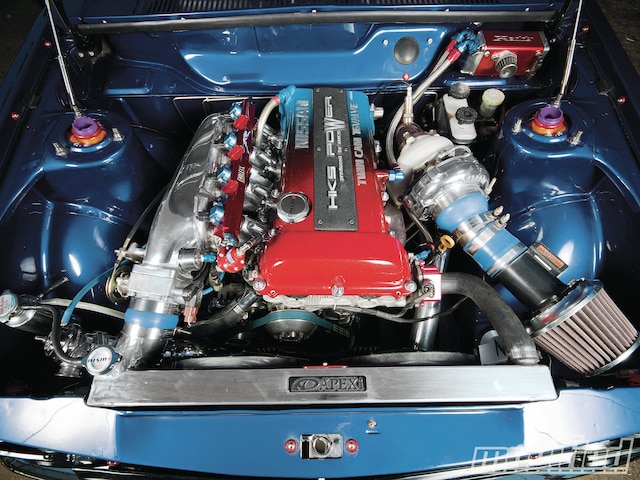 Kevin credits a few key friends for inspiring him along the course of building his 510. “I was inspired heavily by Mario of TSR Fabrications, as well as two other members of the 510 community,” Kevin says. “Kelvin Dietz was the owner of a very clean VG30-powered car at the time called ‘The Smurf,’ and Robert Fuller of Z Car Garage also had a very clean SR20DET–powered 510 (painted the infamous Go Green). Those two cars, combined with the bling bling of Mario’s engine bay, is where I got my inspiration to build my 510 to the level it is. I wanted an engine bay that mirrored Mario’s, and I wanted the exterior and interior cleanness that Kelvin and Rob showed me in their cars. It took me some time, but I finally got there!”

The suspension and braking departments haven’t been neglected because Kevin knows how important it is to not only look great but also maintain balance in an older car with slightly less-than-ideal handling characteristics (especially when you add about 290 hp more than what the car came equipped with from the factory). Eibach coilovers paired with Tokico shocks handle damping duties in the front, with custom Troy Ermish shocks and springs holding things down in the rear. A full set of Energy Suspension replacement polyurethane bushings have been installed throughout the 510’s undercarriage, and a Suspension Techniques sway bar helps keep the car snappy and responsive while cornering. Kevin’s car also has a custom TSR Fabrication five-lug hub conversion, which is something you don’t see every day on a Datsun of this era. A massive Brembo big brake kit provides adequate stopping power for the muscled-out coupe, and Falken FK452 rubber has been chosen for its street-friendly yet grippy characteristics.

On the inside, Kevin has kept things clean and simple. A set of Recaro reclinable seats (sourced from a Mitsubishi EVO VIII) keep him and his passengers held comfortably in place, an elegant performance-oriented street car replacement for the factory seats. A Personal steering wheel gives a bit of track-inspired flash to the cabin, and the custom center console is clean and well suited to a car such as this. A Defi Super Sports cluster has replaced the factory gauge cluster and provides important information to Kevin as he throws the car around backroads.

The end result is an incredibly clean and subtle overall car, one Kevin can drive comfortably around town or take into the canyons and smash corners with all day long. With plenty of patience and a lot of time finding the right parts, Kevin couldn’t be happier with his Datsun. “I would love to put a Cosworth-built or a Tomei 2.2 stroker motor in it,” Kevin says. But he’s not eager to put the car under the knife. After all, he drives it almost every day, and we can see why.