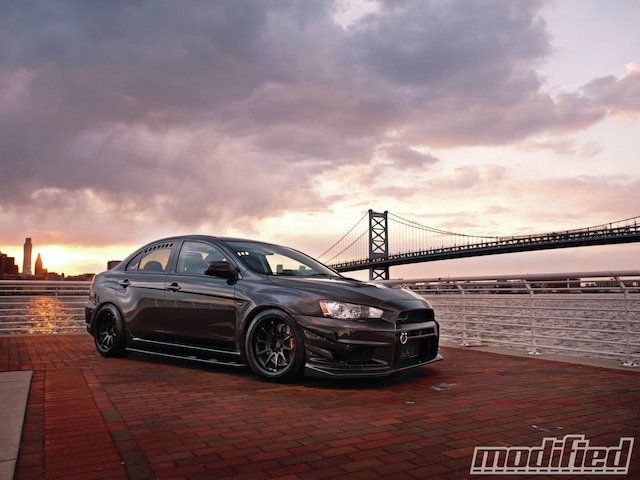 If you’ve ever watched one of the Mighty Car Mods videos on YouTube, you know they’re mad about the word “maaaaaad.” And when you think about it, it is a pretty versatile word. Throw it out in front of just about any noun, be it subject or object, and you’ve instantly added more flavor than a shot of tequila or a spoonful of wasabi. You can even use it on its own to describe something, and not in the traditional sense, but in the more creative mad-means-badass kind of way.

Given that Jesse Ito’s ’08 Mitsubishi Evolution X GSR is rocking more J-spec goodies than Santa Claus during a Christmas Eve pass over Tokyo, his ‘Mad JDM’ nickname probably doesn’t seem all that surprising. But it turns out there’s more to it than that. After trading in his ’07 Civic coupe on this Evo in 2009, Jesse began attending some of the local car meets in his home state of New Jersey. As he explained, “I didn’t really know anyone at the meets at first, so I just walked around and talked to people about their cars. Car people love talking about their cars, so it didn’t take long to make lots of friends at these meets. After that, people started to jokingly call me “Mad JDM” because of all the JDM parts I bought, but also because I am half Japanese. I thought that was pretty funny.”

Having riced out his Civic like a lot of teenagers tend to do on their first attempt at modding a car, Mad JDM Jesse had a much clearer idea in mind when he stepped up to the Evo a few years later. But first he had to learn to drive stick, and as Jesse told us, “Coming from a 140hp Civic, the Evo felt very fast, but stock it fell flat on its face up top. So I began modding it immediately. I wanted people to have that ‘WTF was that?’ reaction when I drove by, but I also knew that it would be a street car more than anything, since I daily drive it to work, to school, and when I go out.”

A lot of us like to think our modified cars have the power to make panties drop. But Jesse’s a lot more honest with himself about these things: “The majority of girls I’ve dated were not a huge fan of my Evo. Between the aggressive aero, the “rough” ride, and the loudness, it isn’t exactly a chick magnet. A few girls have really liked it, but I just laugh when people ask me if I get girls because of my car. I modify the car for myself, not for women.” He may only be 23 years old, but Jesse is clearly a man wise beyond his years.

Wanting a mad- (as in angry) looking Evo with enough power to back up the tough guy image, Jesse has hit a Hideki Matsui–sized dinger on both counts. The blacked-out exterior is angry enough for a Yakuza lieutenant and features top-quality JDM brands including Volk Racing, Varis, JUN, and Colt Speed. As Jesse explained, “Before I got the Varis front end, I had a JUN front lip and different Varis canards for the OEM bumper. I loved the new Varis front bumper, but I could not justify buying it when I already had a very nice setup. I posted on the forums that the only way I’d upgrade was if I destroyed my JUN lip, and in October 2010, I did just that when I ran over a dead deer on the highway. I saw my carbon-fiber lip that I waited months for fly away in pieces in slow motion. Luckily, only my front bumper was destroyed. Good thing I didn’t listen to the Hellaflush police about dumping my car or else I might have totaled the whole car. But I used this accident as an excuse to upgrade to the current setup.” 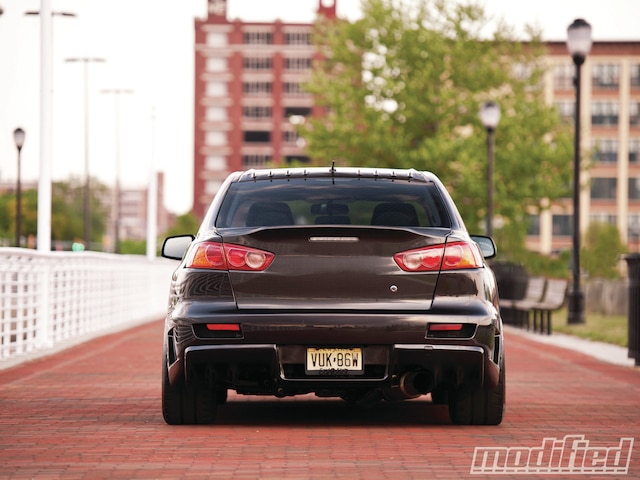 Jesse hasn’t cut any corners under the hood either, where you’ll find plenty of JDM hard parts to go along with top-shelf USDM goods from Evo specialists like Forced Performance and AMS (and Jesse wants to be clear here, he’s not some crazed JDM fanboy, which should be obvious to most of you given the American power-adders under the hood). To achieve his goal of 500 whp, Jesse turned to Speed Circuit in Mays Landing, New Jersey for a full engine build including lower-compression Arias pistons, Pauter rods, and a JUN head package. According to Jesse, “I’ve been to a few of the shops in the area, but Speed Circuit has become my go-to shop. They gave me the time and attention to get this car running like it should. They do great work, build awesome motors, and Dino (the owner) is a phenomenal tuner.”

Built around a Forced Performance Black turbo bolted to a MAPerformance tubular manifold, Jesse opted to cool the air charge with an ARC front-mount intercooler and then expelled whatever heated gases remain through an AMS wide-mouth downpipe and a Tomei Expreme titanium exhaust. With all the requisite fuel system upgrades completed and Dino at Speed Circuit reflashing the ECU and controlling boost with a Perrin EBC, Jesse’s power goal has been met to the tune of 510 whp and 431-lb-ft at 28 psi of boost.

Although Jesse does have a few more small mods in mind (like blacking out the headlights and upgrading the clutch master cylinder), he considers his mad JDM Evo pretty much complete. As he told us, “One of the best compliments I’ve ever received regarding how the car looks was on one of the car forums I’m on [including an 86-page build thread on TriStateTuners.com]. Here’s a direct quote. “There are so many things on this car that I normally hate. But somehow you’ve made it all work together in a way that looks like it could be completely OEM (in some twisted ‘car company owned by a Japanese Batman’ kind of way).” That cracked me up.”

Since receiving a compliment on an automotive forum is even more rare than the JUN front lip Jesse destroyed in the name of road kill, we’re going to have to agree with its sentiment. If there were a Japanese batman, he would probably drive something very similar to what Jesse has created.