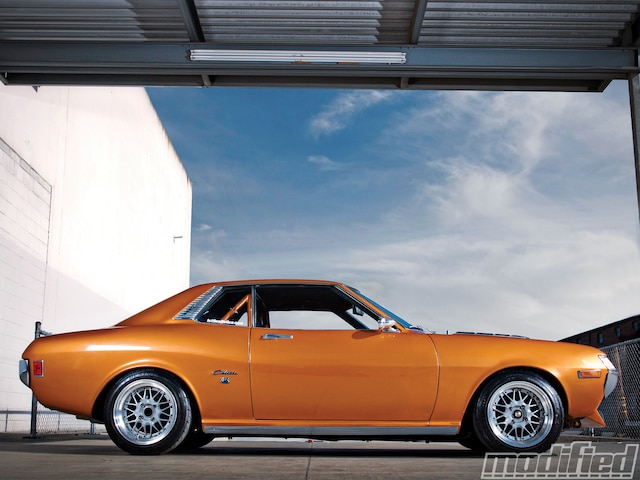 When it comes to old-school Toyotas, there’s no shortage of high-quality builds. Over the years, we’ve seen everything from full ground-up restorations to completely custom-built race cars, and just about everything in between. Adam Thao’s ’73 Celica could be called “restomod,” meaning it falls into the middle ground between an all-original restoration and a fully modified custom car. No matter how you want to label it, this Celica has been transformed from a once beat down and tired old car into the clean and mean custom street rod you see before you.

Adam first came into ownership of this car after his older brother Danny purchased it with the intention of building it himself. Danny purchased the car from a “pick n’ pull” for $500. Needless to say, it was in rough shape. Adam saw the progress his brother had been slowly making, and after growing up around all of Danny’s previous builds, Adam decided it was his turn to give the old-school thing a go. Danny was pleased to let Adam take over the build, but the Thao brothers all continued to work together as a team. Adam’s other brother, Watson, has always been an avid Honda fan. “All [Watson] ever touched and worked on was Hondas,” Adam says. “Danny and I tried numerous times to get him to catch the old-school bug, too, but he never did. So being the youngest of the three, I thought it would be cool to put the two together: old-school Toyota classic with a badass, modern Honda engine.”

The decision to drop an F20 into the old Celica was met with approval from the whole gang, and Adam knew that any old S2000 motor would simply not do. After searching for quite some time, Adam was able to source a good-condition, low-mileage donor. He then began figuring out the best way to fit the motor into this much older chassis. Exodus Auto Garage–custom-fabricated engine and transmission crossmembers have been put in place along with a custom firewall and transmission tunnel. The motor is held in place by Energy Suspension motor mounts, and all the electrical work has been custom tailored for this build by Adam himself. Once the motor had been test fitted, the Thao boys got to modifying right away. A set of TWM 52mm individual throttle-bodies are the first visual cue that this Celica means business; we imagine it sounds amazing under load. Further breathing modifications come in the form of a JDM special Spoon Sports header and 2.5-inch exhaust with an HKS Hi-Power N/A muffler. An Afco Racing custom radiator is a nice addition to the cooling system, and the entire engine bay is incredibly clean and tidy, with no stray wires or hoses standing out of their places.

The tidy and clean theme continues to the exterior of Adam’s Celica. The original body has been redone in a Nissan 350Z color, Le Mans Sunset Orange. This was a shade I never really liked on the Z, but it looks right at home on the vintage Toyota. Aside from a TRD chin spoiler and Tolbet rearview mirrors, the body remains stock. Toyota was onto a really good thing with these early ’70s Celicas; they were designed to be reminiscent of the American muscle cars of the era. The Celica looks like it could be the Mustang’s Japanese cousin, maybe once or twice removed. 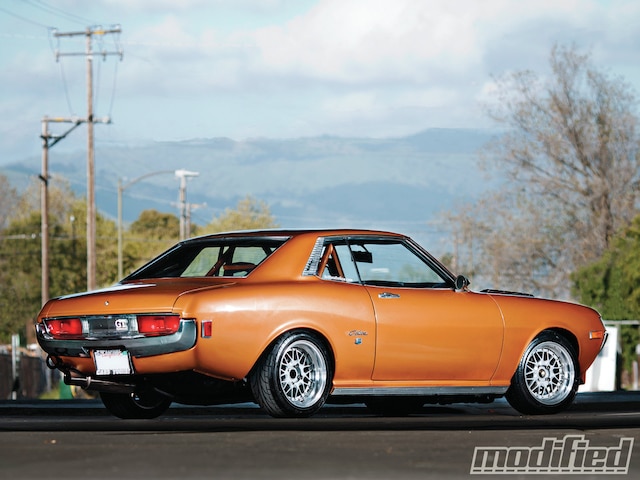 Move to the inside and a nice balance between original flavor and modern upgrades greets your eyes. A color-matched Autopower rollbar and dashboard look nice with the classic black interior. Adam has also custom-fitted several gauges, including an interesting main gauge cluster: DC5 Acura RSX. I’m not entirely sure if I like the way this looks with its exposed faces, but it’s certainly unique, so we have to hand it to Adam for that. A set of old-school Recaro reclinable seats look right at home and provides good support for spirited driving, which is something this Celica sees plenty of.

Adam knew that suspension and braking systems have come a long way since 1973, so he decided it would be a good idea to upgrade everything to a more modern spec. AE86 front brakes and struts have been installed (equipped with Ground Control coilover springs), and he has fit a set of KYB struts from a Camaro in the rear. Interesting choice, we have not heard of this particular application before, but hey, if it works, it works! Cusco camber plates provide necessary adjustability, while a pair of strut bars aid in keeping the chassis rigid and nimble. Adam knows that the right tire makes all the difference, which is why he has chosen to run Dunlop Direzza ZR1s wrapped around iconic SSR Modex Dori three-piece wheels sized at 15x7-inch -2mm up front and 5x7.50-inch -7mm in the rear. The stance of this Celica is really proper and function based; you won’t find any of that slammed and overcambered nonsense in Adam’s garage. He likes to drive his car, not every single day admittedly, but he does take her out two to three times a week.

Adam is very content with how his car sits currently, but he also says it’s far from done. As if any project car is every truly “done,” Adam says he has plans for the future, all of which align with the car’s current theme and style. And we like that. Adam and his brothers have done a fantastic job creating a clean, old-school ride with just the right amount of modern flavor thrown in to make it a real driver’s car. What more could you ask for than that? 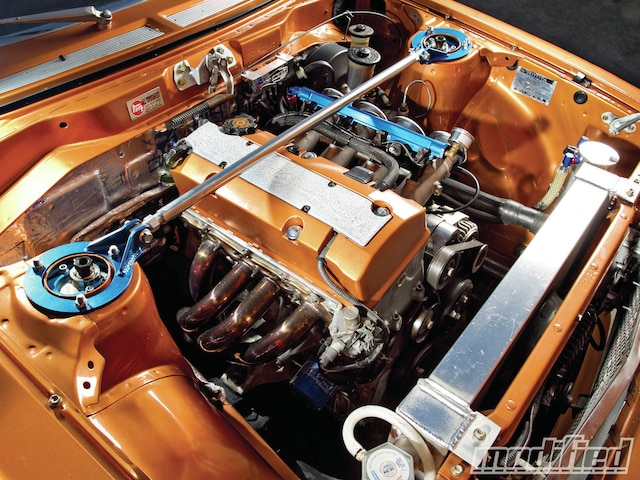