Tim Florio has saved this S14 from certain doom. 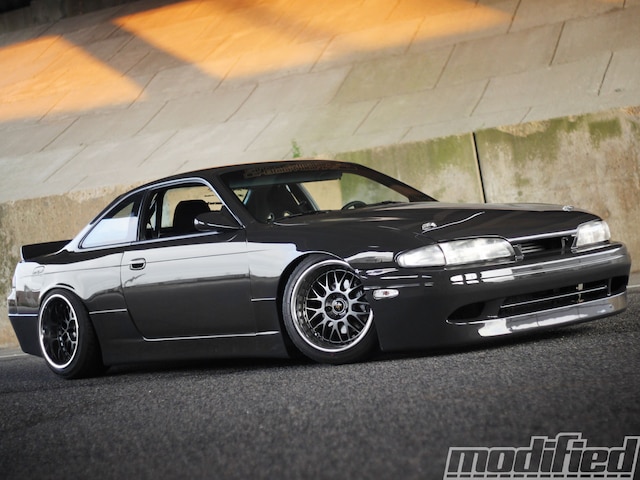 Chances are if you’re reading Modified, you have built at least one project car in your day—or maybe you’re looking for your first right now. Either way, we are all fully aware of how difficult it can be to find the proper platform to start a project with. It’s very hard to come by a clean S-chassis Nissan these days because of how popular they have become with the aftermarket segment. It’s no secret that the S13 and S14 are some of the most widely supported and modified cars out there, and they have tons of potential for nearly any kind of build, which is why a clean starting point can be hard to come by. So when Tim Florio found one that was admittedly fairly junky but was “close enough to get started,” he jumped on it and began to rebuild.

Tim has spent a lot of time around modified cars. As a member of a northeastern car club called Sumospeed, he’s been pretty much surrounded by Japanese sport compacts his whole adult life. Tim first got the bug with an FD3S several years back, but after an unfortunate series of incidents with a shady shop (which resulted in several small pieces being stolen from the car, as well as a ruined 13B due to a few unapproved joy rides by employees), he understandably called it quits on the modified car game for a time. Tim couldn’t stay away for long, though, and after seeing his good friend Stephen Knoop’s LS-powered S14 on the streets and at local shows and events (as well as on the pages of this very magazine, “A Little Bit of Green,” Feb. ’12), he began searching for an S14 to call his own. What he eventually found was exactly what he wanted—a “project” without a doubt, but one that had the makings of something good. 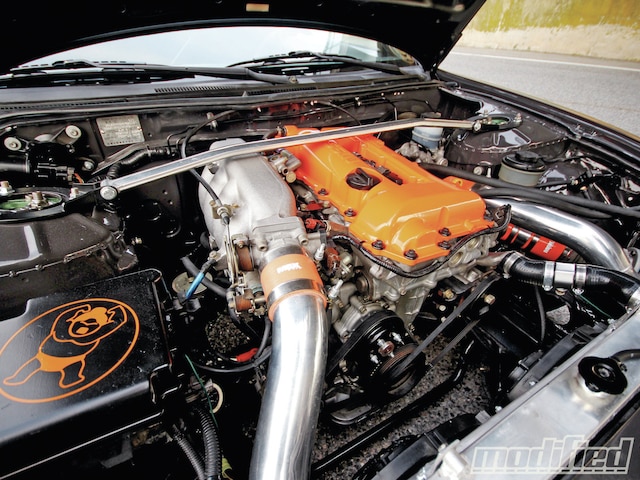 “I picked up the perfect donor car for the project,” Tim tells us. “It was an ugly S14 with an S15 front end conversion. The car had a garbage interior, disgusting ’cage, horrible wheels, a gaudy body kit, a less than favorable paintjob with a [messed] up wide-body, wiring issues, and needed to be completely overhauled and rebuilt. But this car had a saving grace: It featured a very rare Nissan Silvia S15 Spec-R powertrain, including the S15 Spec-R motor, six-speed transmission, and helical limited-slip differential. I yanked the powertrain out and stripped the car to begin the rebuild process.”

The motor remains stock internally, with boost being fed via a stock S15 Spec-R turbo complemented by a stock fuel system. “The S15 Spec-R SR20 is already the most powerful of any SR engine,” Tim reminds us. “And its turbo and fuel systems are superior to those found on the others as well. For my goals, I knew I wouldn’t need to change either of those aspects and decided to complement them with bolt-on power-adders.” Tim isn’t trying to build a crazy racing car here, folks, he just wants a fun street car with a reliable powerplant and enough juice to keep the smile on his face on a freeway on-ramp.

As you can probably tell, Tim has spent a fair amount of time perfecting his ride height and stance. “I knew I wanted it to have aggressive fitment and ride lower than most cars, but at the same time I didn’t want, as one Zilvia.net member once so eloquently put, ‘my frame scraping the Earth’s crust,’” Tim says. “I enlisted Knoop’s help because he is the mastermind of wheel fitment and suspension. We came up with the wheel sizes and desired ride height to get the look I wanted yet walk that fine line of function (well, as much as needed for a strictly street car) and form.” Tim finished off the handling and footwork department by replacing the factory bushings with urethane pieces and freshly powdercoated subframe and control arms. “I have OCD and wanted the undercarriage to resemble a new car,” Tim says with a laugh. 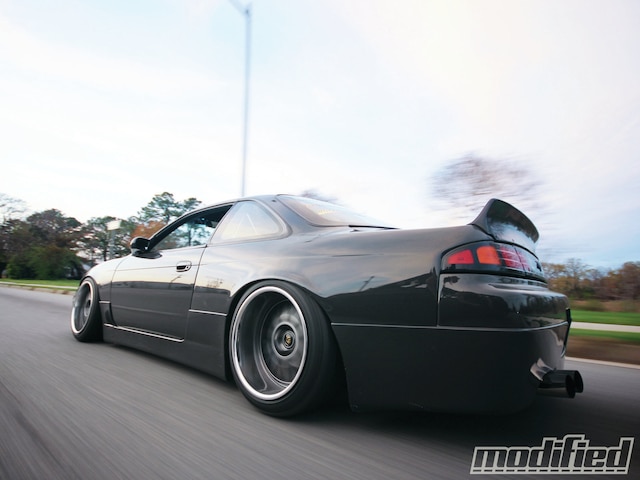 Tim wanted to keep the interior looking fresh and proper, with all panels and pieces in place. This may seem odd to mention, but in the S-chassis world you might be surprised at how often people leave silly things out or take shortcuts for no apparent reason other than laziness. Tim is not one of those people—not by a long shot. All the upholstery has been custom dyed to match his F1 Spec Type III driver’s bucket seat, and the previously existing full rollcage was chopped up and made into a completely new rollbar setup. “For the interior, I became heavily inspired by Porsche GT3RS,” Tim says. “[Those cars] have the ideal interior as far as I’m concerned, sporty with a rollbar yet full of features, and they still have a luxury look to them. I really wanted this car to look as if it were produced this way from the factory and look unmodified.”

Bodywork took up a big part of Tim’s rebuilding process. The once ill-fitting S15 “Strawberry face” has been ditched in favor of the original Zenki S14 front end, and the rest of the previous bodywork essentially had to be redone completely. “The previous owner had a molded wide-body kit, and whoever did it shouldn’t be doing bodywork,” Tim cringes as he remembers the sad shape of this car once upon a time. “It had waves, cracks, and wasn’t lined up at all. In the Hampton Roads area there is only one place to get quality paintjobs and bodywork: Stock or Modified Bodyworks in Virginia Beach. On any given day you will find high-end exotics, show cars, or restoration jobs. Joey (the owner) is a perfectionist and has a God-given gift when it comes to painting and bodywork. I contacted Joey and he came to my house to check out the car and we came up with a plan. He decided he wanted to mold the wide-body but do it right this time, and I’m grateful he ‘persuaded’ me to agree with him. He pointed out that if we did the popular rivet method, no matter how great the paint was it would detract from the finished product and clearly look like it was slapped on. Molding was the only way to give it the factory look I wanted.” The body pieces Tim chose look really great as a whole, and it’s a combo we haven’t seen before. The Supermade Instant Gentleman kit, Chargespeed rear overfenders, Rocket Bunny rear wing, and custom “all metal” flared front fenders (courtesy again of Tim’s buddy Stephen Knoop) flow together amazingly with the Zenki S14 face. Porsche GT3RS Grey/Black paint was chosen, an elusive color that had to be figured out over time by trial and error (as well as with some luck by having an insurance-claimed GT3RS come into the shop.) Everything just works with this car.

This S14 is one of the cleanest and most well built examples we’ve seen in recent memory, and one of the most surprising aspects is the time frame for all of this. “This car came out exactly how I envisioned it, which is rare but expected after an 18-month build process,” Tim says. We can understand the feeling of pride Tim must feel after seeing the way everything came out, which is why we were shocked and a bit sad to hear that the car has been sold since this photo shoot happened, and Tim knew he was on his way to the pages of Modified. So, Tim, we thank you for the content, and we hope you find yourself inspired to build another car in the near future. If it’s halfway as clean as your S14, you’ll be A-OK in our book.