There’s something to be said about a dedicated, long-term project in the drifting community these days. Too often we find various drift builds (usually an S-chassis) that consist of a myriad of cheap parts slapped onto a smashed-up shell, usually resulting in a car that looks like it has taken more hits than Call Me Maybe on YouTube and performs just as poorly. Some would argue that originality has been all but lost in the U.S. drift scene and that the standard of having a drift car that not only performs well but looks good doing it has all but disappeared.

Given the current state of affairs in this community, Brian "Crab" Kolar’s ’85 Nissan 300ZX is truly something special. Brian has been into cars and airplanes since before he could talk. His father was also an avid car buff and would frequently take him to races and other automotive events. In fact, Brian was fortunate enough to see Paul Newman race a Z31 much like his own at Road Atlanta back in the ’80s. Perhaps seeing Newman zip around the course had a lasting impression on Brian, because when the time came for him to purchase his first car, he chose the ’85 Nissan 300ZX you see on the pages before you—albeit a little bit different back then than it is now.

Before jumping into the details of this beautiful car, it should be known that Brian has completed some pretty wild projects. His past builds include a Toyota Cressida with a Z31 engine, a Geo Metro with a rear-mounted Ford Taurus SHO V6 engine, and a Subaru 360 with an engine from a motorcycle, just to name a few. “I respect true car customizers and guys who make something unusual,” Brian says. “When you drive anything unusual, there is nobody there to hold your hand and sell you stuff to bolt onto it. It takes guts, know-how, and a lot of patience.” With ambitious projects like these, it is clear why Brian was determined to make his Z31 into a competitive drift car.

I figured I would swap if it ever blew up, but it’s worked out so well that I think I’ll stick with the VG.

"Drifting is about standing out with skill or some sort of style, so my thinking was "Why handicap yourself with a run-of-the-mill car?" Brian explains. Choosing this path was no easy task. Aftermarket support was scarce, and sourcing parts for the chosen Z31 platform proved difficult. Determined, Brian was on a mission to make the car function well as a drift car.

The first area to be addressed was the suspension. The stock semitrailing arm suspension on the Z31 is the major piece of the car’s design that holds it back from being a proven drift chassis, so major adjustments needed to be made. The entire subframe was swapped for an S14 multilink setup, complete with a host of adjustable suspension components from Largus and Aurora to properly dial in the car’s alignment.

The trend of using S14 suspension components continues to the front suspension, where Megan tie rods, Kazama outer rod ends, Battle Version adjustable lower control arms, and Megan tension rods have all been adjusted to fit. Even installing a set of coilovers on the Z31 is far from a bolt-on affair. Brian modified a set of Tanabe Sustec Pro DD coilovers designed for the S14 to fit under the arches of his 300ZX, replacing the aging and poorly designed factory components. The rear strut towers were raised 3 inches to accommodate these changes and give the car its low stance.

In addition to suspension pieces, the 4:11 final drive from an S14 makes its way into the rearend of the car. However, the factory 240SX differential that was once mated to that rearend has been replaced with a Kaaz two-way LSD to keep those tires roasting at full lock. An Exedy Stage-2 clutch and Fidanza aluminum flywheel round out the drivetrain modifications and ensure the car is up for the frequent on-track abuse.

One of the most difficult aspects of modifying a car with little aftermarket support can be the exterior. It’s tough to make a car look good when there are not many aero options available. Being the ambitious do-it-yourselfer that he is, Brian set out on the often-lonely path of creating his own custom exterior modifications. “I kind of envisioned a retro circuit look with the S30 Z’s smooth lines, while maintaining the Z31’s charm,” he explains. We would say he did a pretty good job of making this vision a reality. The unique look of this Z31 was accomplished with numerous custom pieces, including the rear spoiler, rear bumper, and vented hood. In addition to these custom accents, the front of the car received a kouki Z31 front end conversion and a Kaminari front lip. MSA side skirts help tie the front and rear modifications together and add an aggressive look to the exterior of the car, while a set of retrofitted 240Z blister fenders take the mean exterior appearance one step further. Upon completion, the exterior of the car was sprayed Ford Sonic Blue.

The interior of the car is all business. Most of the stock interior panels have been gutted for weight reduction, in addition to making room for the custom 10-point rollcage. The Buddy Club seats use custom mounts to allow for the lowest seating position possible. In keeping with the purpose-built race car theme, the dash has been flocked. Brian maintains an interest in airplanes to this day and has retrofitted an armament panel from an F-111 fighter into the car, repurposing the ammo gauge as a voltmeter. A host of other gauges from various manufacturers helps to monitor the engine’s vitals during a grueling drift session.

Despite going through with some pretty crazy engine swaps in his day, Brian chose to keep the stock VG30ET engine for his Z31. The obvious solution for the higher power demands of drifting was an engine swap, but he decided to take a crack at modifying the factory single cam engine first. “I figured I would swap if it ever blew up, but it’s worked out so well that I think I’ll stick with the VG,” Brian says. The engine is given a pick-me-up via an ATP GT3071R twin-scroll turbocharger mated to a Tial 38mm wastegate and a custom exhaust manifold. Custom exhaust piping mated with an Apexi N1 muffler finish the job of expelling spent gases, while 550cc Mazda FC3S fuel injectors deliver the necessary fuel to the thirsty engine. Tuning is handled by an Electromotive TEC GT ECU, while a horizontally mounted radiator, a Treadstone front-mount intercooler, and a set of Nissan Maxima fans keep things cool.

With the car getting a new lease on life in the power, handling, and looks departments, a set of nice wheels and tires was all that stood between this Z31 and drift-day success. Brian hit the nail on the head with a set of classic Watanabe RS8 wheels, rebarreled to 17x9.5 up front and 17x10.5 out back. To bring those beautiful rollers to a stop, a full brake setup from a Z32 300ZX was installed.

Brian Kolar is the perfect example of someone thinking outside the box in a drift scene where following the trend is a common stake. Although he’ll be the first to admit that making an uncommon car competitive and fun to drive can be extremely frustrating and challenging at times, he shows us that with enough dedication and a creative vision, you can build not only a car that performs well but one that looks good doing it. 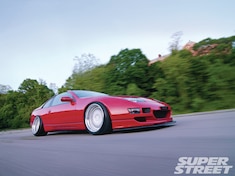 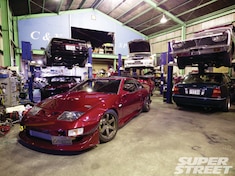