Scion may be long gone, but FR-S are just as common today on the drift and time-attack circuit as they are at car shows and meets. 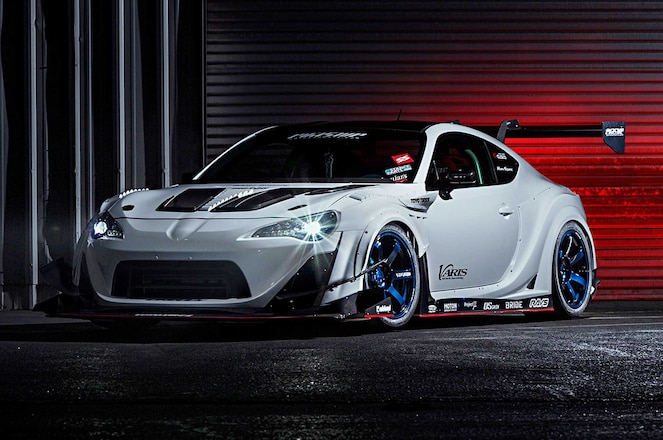 In the early 2000s, Toyota introduced its Scion brand to North American enthusiasts, and many in the import tuning community had a warm, fuzzy feeling inside because of it. On the surface, it looked like a big OEM was finally reaching out to younger car consumers with a make that was catered to them, and JDM-o-philes in particular were stoked to be getting a rebadged Toyota bB mini MPV in the boxy first-gen. Scion xB. The brand even introduced an extremely affordable and abundantly tail happy (as well as sexy looking) front engine, rear-wheel drive, the FR-S. It appeared as though Scion was the brand young car fans were hoping for.

Who would have ever guessed back then that young people don't have money to buy new cars? We're kidding, of course, but unfortunately Scion seemed to peter out before hitting even greater heights; it suffered from poor sales as early as 2010 and by 2016 Toyota had pulled the plug completely on its offshoot and absorbed the remaining models back into its own lineups. The FR-S became the 86 (which it probably should have been from the start, given the model's spiritual connection to the AE86) and the iM morphed into a Corolla trim.

For being around just 13 years, though, Scion made a sizable impact. The first-gen. xB seemed to have a bit of cult status as a project car platform (and maybe still does, depending on who you talk to) and FR-S are just as common today on the drift and time-attack circuit as they are at car shows and meets. In fact, when we looked up which stories about Scion builds scored the most views on our website, the data came back overwhelmingly FR-S.

Not only FR-S, but 2013 FR-S—we're not sure why that is (possibly because it was the first model year) but 4 of the 5 Scion on our list are from 2013, including our ghetto-fabulous Ratchet Bunny widebody. The only exception is Thanh Duc Giang's VLENE-kitted Yuzu yellow FR-S Release Series 1.0, which is a 2015 model—keep reading to learn more about each car compiled below, and make sure to click the links to see the full story behind each build. 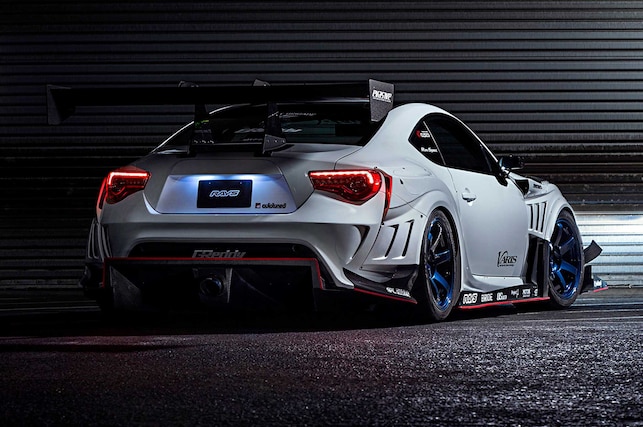 Something just feels right about Brian Yeung's widebody ZN6 being atop this list. It is indeed a stunner, all aero'ed out and gilled like it belongs with a shiver of sharks instead of attending pretty much every major import car show in Southern California. We even knew the car in a previous stage when it rocked a Project Mu-inspired livery, but very little can compare to the Scion as it sat for this photo shoot.

Brian's FR-S was the first in the U.S. to employ Varis's profusely vented Kamikaze body kit; it was also the first to run GReddy's turbo setup and ITBs for the car's 4U-GSE boxer engine. In fact, the teams at GReddy Performance Products, Evasive Motorsports, and AutoTuned all laid hands on the car in a collective effort to get it ready for the 2017 SEMA Show where it made its widebody debut in the Mackin Industries booth. Brian's FR-S is definitely one of the earliest to set the standard, and builders have been playing catch up ever since. 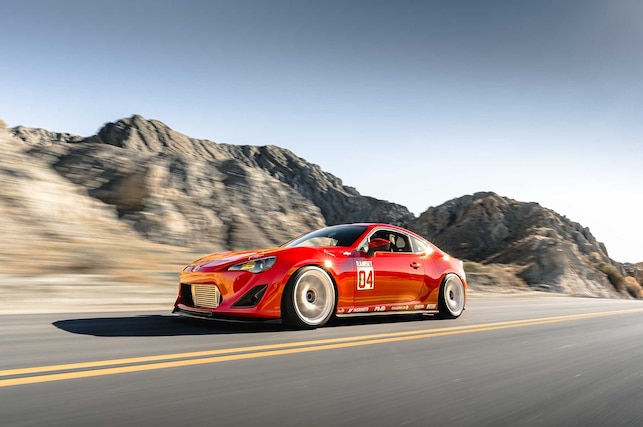 Wait ... no widebody? That's probably the first thing you notice about Franchel Villanueva's FR-S; oddly enough, the absence of flared-out fenders is one of the elements that make this Scion so unique. Then you pop the hood and everything starts to sense. The show-quality engine bay features a raft of high-quality titanium bits from AMG Fuel & Design, including the charge pipe, intake, radiator and radiator plumbing. Franchel then added more titanium by swapping all of the nuts and bolts, radiator cap, coolant overflow pulley cover and hood prop for Chasing JS pieces, as well as quick-disconnect clamps from XRP, just to name a few things.

This FR-S is more than just looks, though. Franchel runs a Garrett GT2860RS turbo mated to an off-the-shelf JDL manifold and the system is tuned using an EcuTek ECU and Delicious Tuning flex fuel kit and map. The combo is good for 280whp on 91-octane pump fuel and 340whp on E85. Looks might be nice, but power is seductive. 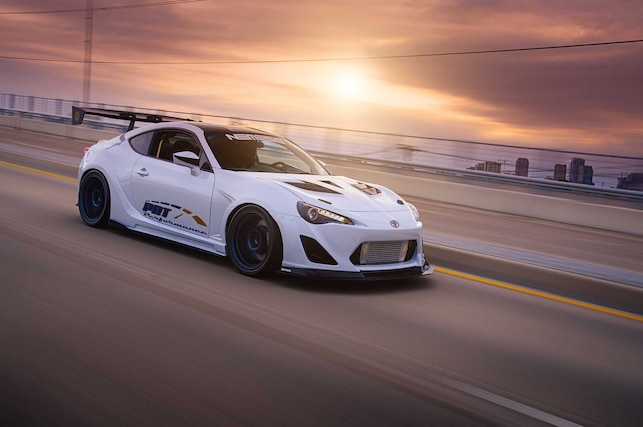 Very few achieve the dream of putting together a car that can do almost everything the way Patrick Leong has with his ZN6. Let's start with the rock-solid aero; everything from the Driveway Labs splitters and rear diffuser to the Voltex rear wing are chassis mounted for maximum effectiveness, while the Varis-styled widebody bits are fabricated entirely from sheet metal and were installed and painted by Patrick's friends over at Killer Hot Rods. The wider fenders make room for the 10-inch-wide Volk ZE40s and 295-series Toyo R888 tires that Patrick needs for the race track.

Similar effort was poured in the power plant, with heads by Full Blown Motorsports and short block put together by PRT Performance. Why the built mill, you ask? With a Precision 5858 turbo producing boost and an E85 fuel conversion, the FR-S makes a whopping 486hp at the rear hubs, which seems like the right kind of power to tackle most of life's hurdles. And apart from the head and engine assemblies, Patrick did most of the work himself on his Scion project, making this dream an almost entirely hands-on experience. 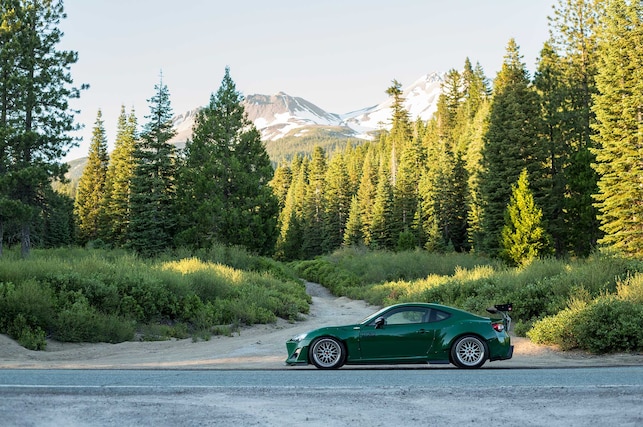 In 2012, Super Street embarked on a wild adventure with a 2013 Scion FR-S that we ended up naming "Ratchet Bunny." At the time, our car was sort of a big deal-fielding one of the first Rocket Bunny kits to hit the States, BBS Motorsport wheels, AP Racing brakes, and a rare green color descendant from an Aston Martin hue. The car debuted at the SEMA Show and it became one of those SS milestones that will forever be associated with the brand.

We documented the build of our ZN6 in a few different ways, this recap story being our most heavily visited. In it, we cover all the stages of the project - from artist Jon Sibal's rendering to eventual tuning at Evasive Motorsports—and even captured the inimitable Kei Miura, Mr. TRA Kyoto himself, eying up proper wheel fitment. Sometimes we get to do really cool stuff, and this was arguably the coolest. 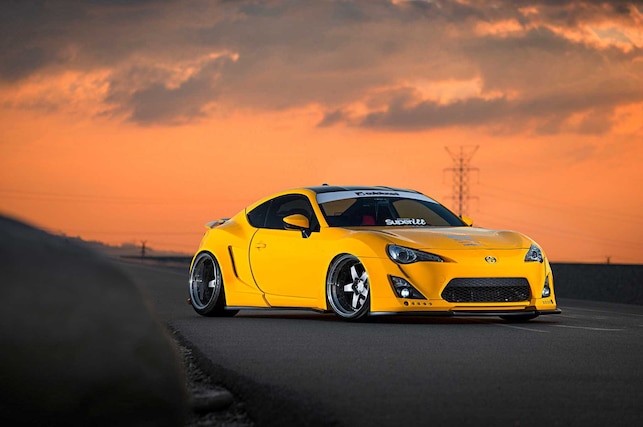 Thanh Duc Giang, aka Twig, never dreamed his Release Series ZN6 would turn out this way, but when an opportunity to team up with Mark Arcenal of Fatlace on the SEMA Show project car presented itself, how could he say no? The end result you see pictured features the first completed Vlene widebody kit in the U.S., an install facilitated by our friends at AutoTuned.

AutoTuned further developed the TRD-grade FR-S with an Air Lift suspension at the corners and Sprintex SPS supercharger under the hood, among a host of other mods. Pandem and Varis builds might get all the attention, but we like the way this Vlene FR-S screams.