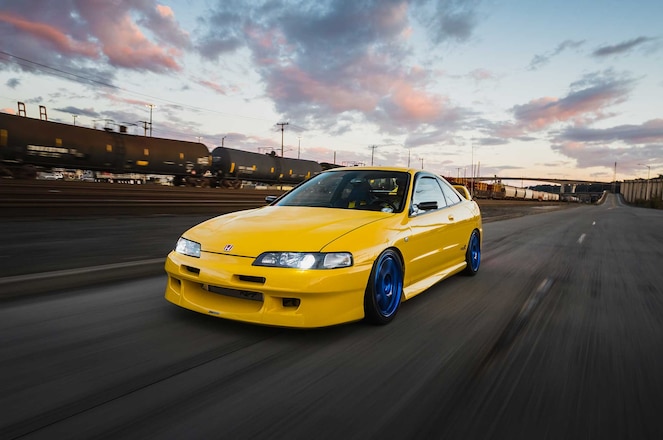 VALUE AND WORTH OF ORIGINAL TYPE R RISES

Whether it's a 1997, 1998, 2000 or 2001 model, used Acura Integra Type Rs are pulling a premium these days. Last year a single-owner Championship White gem with only 6,000 miles sold for $82,000 on Bring A Trailer, while other ITR listings with under 50,000 miles are going for around $25,000 (roughly the same MSRP of the car at launch twenty years ago). There's a hair over 3,800 produced and sold in the U.S., and we predict their value will continue to climb as good condition examples become scarcer, as well as Honda enthusiasts further appreciating how legendary the DC2 Integra Type R was and still is today.

The DC2 ITR was designed and manufactured to meet homologation requirements to compete in FIA Group N and GT World Cup racing, meaning it was basically built to be a racecar. Its 1.8-liter DOHC VTEC four-cylinder (codename B18C) was a high compression, high revving motor (8,400rpm redline) rated at 195hp and 130 lb-ft of torque. At the time, the four-banger produced the most power per liter of any naturally aspirated engine in the industry at 108hp (Honda would later beat this record with the S2000). Paired with a close-ratio five-speed manual, Helical limited-slip diff and sport-tuned suspension and brakes, the 2,639 lb Acura was applauded by journalists as one of the best NA front-wheel-drive cars in history, and even today, it's still common to encounter them at local tracks (plus our own FF Battle). They're also a top choice among serious project car builders, like Ken "Radar" Edwards from Federal Way, Washington and his 2001 Phoenix Yellow Integra Type R. 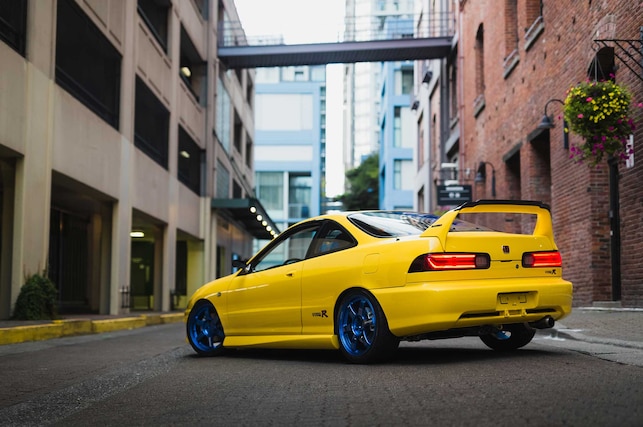 Last Summer, we hosted a car show called Super Street at LeMay America's Museum in the Pacific Northwest with the help of Meguiar's. The show field consisted of a curated/invited list of 120 Japanese and European cars, Radar's Integra being one of them. With several Hondas on display, the supercharged Phoenix Yellow coupe left a lasting impression with its loud style blue TE37SAGA wheels, JDM front-end, Mugen aero and tons of other unique details. Radar has successfully given us a refreshing look at the DC2 Integra - a car that's been modified a thousand different ways within the Honda community, which is why he wasn't just a winner in our Ultimate 12 Awards at LeMay, but we're also proud to announce him as this month's standout Honda owner in Super Street.

For more coverage of our Super Street at LeMay Car Show in the North West, check out Part 2 and Part 3.

1-ON-1 INTERVIEW WITH RADAR EDWARDS

How'd you get into the car scene Radar?

I got into the scene in 2006 with my Nissan 350Z. During that time, my cousin introduced me to Team Menace. I joined and did shows with them all over the Pacific Northwest as well as Canada and Cali. It was a C-West twin-turbo 350Z painted British Racing Green like an Aston Martin. I had the pleasure of showing it at SEMA back in 2009. 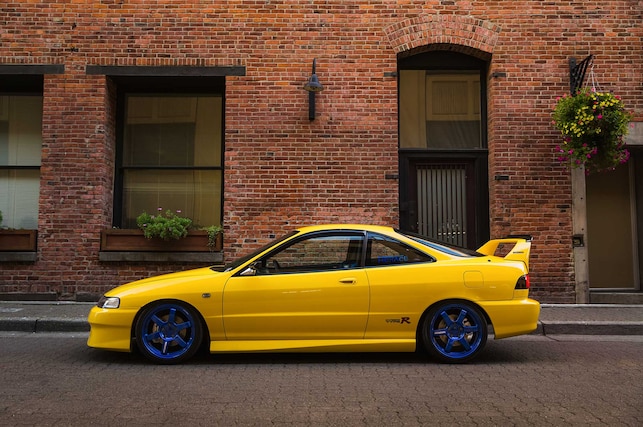 Nice choice in color! Same as our very own Ratchet Bunny Scion FR-S! Any other notable project cars?

When I was growing up, I was all about Hondas and owned a Prelude Si. As I got older, I got into Nissans, thus the reason the valve cover on my Integra now was painted Midnight Purple from the Skyline by my friend Ron. I was also one of the first people to buy a manual NISMO Juke, but I gave that up pretty quick due to the lack of parts.

So, let's get to your Type R... How long have you owned it and what made you want to get one in the first place?

I've owned my Type R for about three and a half years now. My wife actually bought it for me. I've always wanted an Integra Type R in Phoenix Yellow because it was one of the Tamiya car models that I built when I was a kid. Also, one of my older neighbors growing up had a really clean GSR Integra with a full Wings West kit, lowered on Racing Hart C5 wheels. To this day, I'm still looking for that clean set of C5s to put on my Integra. 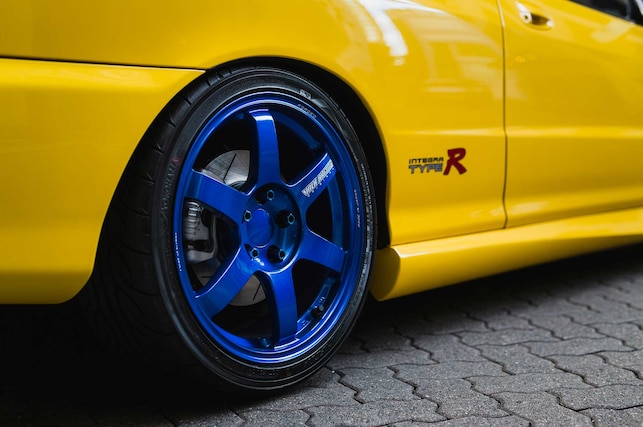 Such a memorable old school wheel... Good luck on your search! How would you describe the overall theme of your Integra?

I went for a clean, period-correct-plus theme, an old school feel with upgraded technology and a little bit of titanium all the way around; also, show quality but also has some go!

That's a lot of key descriptors but I think I get it! What sort of rare goodies do you have on there?

The only real rare parts I have are my Mugen cluster and Mugen cluster bezel; maybe the Mugen aero kit, too. That took me a year to find. Also, my Mugen push button switch that was made for a Honda N-One in Japan.

Hungry for more Mugen? Take a look back at the Ultimate Mugen Acura NSX featured five years ago. 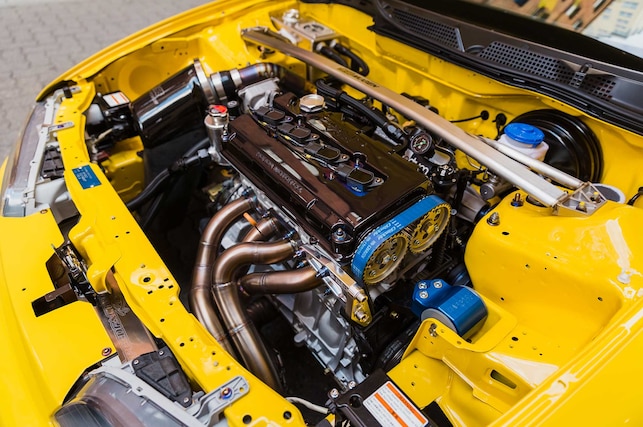 Can't go wrong with Mugen! What would you say was the most challenging aspect of your Integra build?

Refreshing the Jackson Racing supercharger to look good on the exterior, even though it's not that visible from the top of the engine. It was very old and used and there were oil and grease spots all over it. You couldn't get it out with just scrubbing so it took some time. In terms of the inside, it needed to be rebuilt, which consisted of new ball bearings, coupler, gaskets, grease and of course supercharger oil.

Very nice, and it looks like when all was said and done, you're pushing about 50hp more. Are you happy with the roots blower on there or did you consider staying NA or going turbo at all?

I always wanted a supercharger for my 1994 Honda Prelude that I had in high school. So, why not do it with this car and do an old school supercharger to make it period correct?! The sound is so amazing and there's nothing like it! 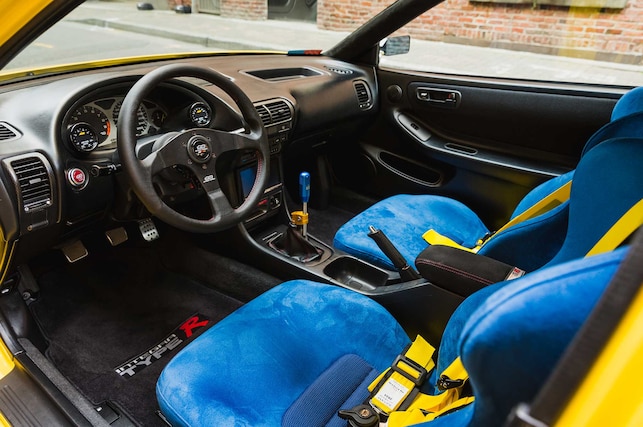 We'll have to get some video/audio the next time I'm in Seattle! Besides the blower and Mugen parts, I understand the header and intake arm are also quite unique...

Yes, they're built by Mike Andrada aka M-FAB. The header was designed to suit the Jackson Racing supercharger. We used bigger runners to help move air out of the motor since we knew we were going to run maximum boost pressure out of the charger at 13psi. The titanium intake arm was made to help mate the Mugen box and the supercharger through the 70mm SpeedFactory throttle body. We could've went with aluminum or stainless, but I went with titanium to tie in all Chasing JS and SpeedFactory titanium fasteners. Lastly, I want people to see racing parts can be used to make cars, not only work properly, but also look clean. The Pacific Northwest has some amazing fabricators in its own backyard!

Amen, and I find myself still looking back at Mike's 800hp K20 Civic feature often. You mentioned to me before that the NSX brakes have a story behind them, too?

Yes, they were given to me by Rich Furlgay from his old NSX. The brakes were completely refinished and painted the same silver as the engine block. The brakes require new rotors that are a little bit bigger than the stock ones. The front brakes go right on but the back required a bracket from Fastbrakes to make them fit. We also had to hold the rear brakes upside down with a woodblock in them to bleed it because the nipple is pointing down. I haven't seen these brakes on any other Integra in Washington. 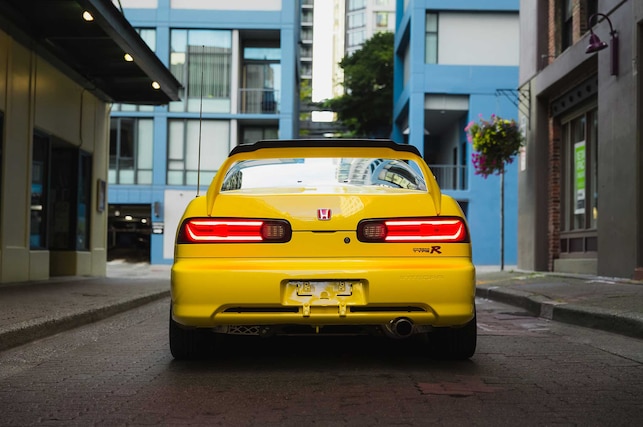 Those LED taillights are definitely the first I've ever seen on an Integra! What's the scoop on those?

They're my one-of-a-kind chasing LED taillights built in Japan by Genki TRS. I created the design and it came to life as I wanted Knight Rider style turn signals. It also has different dancing modes and patterns when I brake, haha!

That's something you don't see every day! Last but not least, what's next for the project? 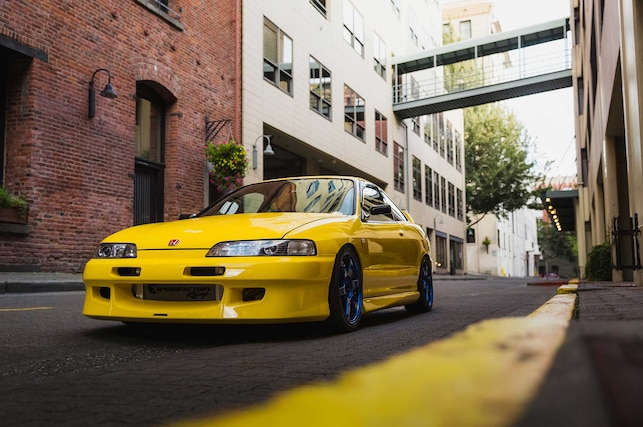 We look forward to seeing the next phase of the project. Thanks Radar!