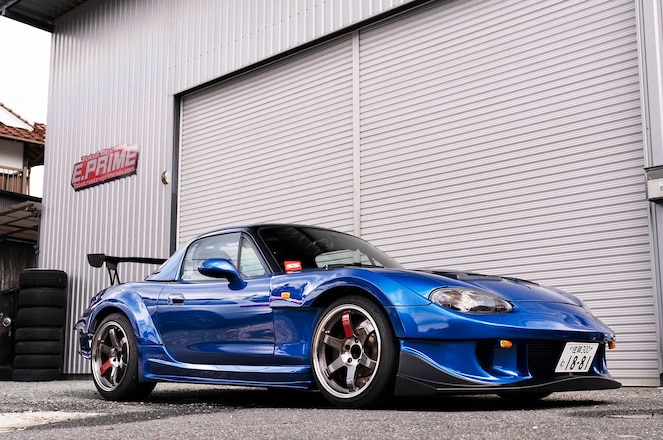 Hot on the heels of our feature on the TotalCreate E.PRiME Nissan S13 Silvia comes an unlikely custom supercharged 1999 Mazda MX-5 Miata. The roadster may have a tiny presence on the road, but with tons of unique mods, it's something you don't want to miss.

WIDEBODY CUSTOM DESIGNED BY ITS OWNER

Back in 2009, a college student by the name of Ko Nakagawa purchased a '99 MX-5 in hopes of someday constructing his own widebody kit. Despite Nakagawa-san's reluctance to share with us his current occupation or field of study in school, the Kagoshima local was more than happy to discuss his custom Miata's build process (Kagoshima is the furthest southwest tip of Japan, almost 400 miles away from TotalCreate E.PRIME).

Nakagawa-san explains the second-gen NB Miata seemed a bit "too cute" and incomplete. So, he designed his own widebody kit—several versions, to be exact. The body of the bright blue roadster began life as a sketch and those drawings evolved into a blueprint, in turn inspiring Nakagawa-san to build a real-life plastic model. It was this miniature 3D representation that would eventually influence the lines seen on the life-sized version MX-5 we're showcasing today.

In 2012, version 1.0 of the one-off widebody was created, followed by additional aero components in 2013 which Nakagawa-san refers to as version 1.5. It wasn't until February of 2017 when he collaborated with Chiyomori Auto Body where the final version 2.0 would be achieved. Nakagawa-san's latest sketches and miniature sculpture had given the body shop the direction it needed, and a unique widebody concept emerged, crafted from various aftermarket aero, some homemade fenders and a shitload of man hours.

BREAKING DOWN THE ONE-OFF WIDEBODY

In order to match the modified RE Amemiya AD Facer N1 front bumper (originally meant to fit a FD3S RX-7), Chiyomori Auto Body had to make the Miata's front and rear fenders equal parts wild and wide. Molded to flow outward from the reconstructed front bumper, these one-off fenders feed air rearward toward a Garage Vary rear bumper along with side skirts from the same brand. Up front, a vented hood from Nogami Project rests, while a Voltex Type 1 GT wing takes care of downforce out back. The result is nothing like we've ever seen from a NB Miata.

We all know Miatas don't come with a lot of power from the get-go. The factory 1.8-liter DOHC inline-four makes about 140hp, which obviously wasn't going to cut it for Nakagawa-san. He bumped up performance by installing an HKS GT supercharger kit and intake, a more efficient Maxim Works header and a full Car Make Corn's titanium exhaust. Paired with a carbon fiber prop shaft from Fujita Engineering and HKS F-CON piggyback, the little Miata that could now makes around 200 horsepower.

Powerband bump complete, Nakagawa-san turned his attention toward converting the Miata to five-lug, which was completed in late 2015 thanks to a set of Keisler Automation's machined aluminum knuckles. This also allowed the installation of an Endless big brake kit, a set of RAYS TE37SL wheels in a 17x9.5" configuration and sticky Bridgestone RE-71R summer tires, all of which remained on the Miata.

As with all Miatas, handling remains a strong suit with this machine, and much like the aero on this car, Nakagawa-san carefully spec'd out custom components. For this side of the transformation, a set of ultra-high-end Ohlins DFV dampers were selected, which were then paired with Hyperco springs. Stiffening things further was the introduction of a Saito four-point rollcage and ladder bar, which not only add rigidity, but instant cabin cool points as well.

While we discovered Nakagawa-san's Miata at TotalCreate E.PriME, shop owner Eiji Daito didn't actually reveal what he's working on for the NB MX-5. Throughout our interview he remained tight-lipped as to why this car was hidden behind the garage. We can only assume that it'll be time soon for some custom fabricated go-fast goods and a bit of engine bay love, much like what we just saw from Daito-san's personal S13 build. So, while it's debatable as to whether or not this vehicle will ever be labeled as complete, Nakagawa-san's supercharged, custom Mazda Miata roadster is already plenty awesome as is. And from the looks of things, it's about to get even better very soon.

Promising to "provide a wide range of customers with something unprecedented by being free from vehicle types and content," TotalCreate E.PRiME and its creator, Eiji Daito are on a mission to create things that do not exist. Simply put, this translates to the fabrication of one-off parts... LOTS of them. E.PRiME fabs-up things the old fashioned way; taking chunks of aluminum, titanium, and stainless steel, and hand-crafting them into products like surge tanks, oil catch cans, engine mounts, intakes, exhausts, and more.

With a focus on both appearance and performance, E.PRiME not only builds show cars, but full-on race machines as well. Stitch-welding, meticulously formed gussets, custom cages, one-off fenders, tubbed wheel wells made from E.PRiME's own line of motorcycle parts... it all adds up to bigger, faster, sturdier and sexier Japanese automobiles.

Don't forget to check out the car which made us geek out to E.PRiME in the first place, its Turbocharged AE86 racecar. 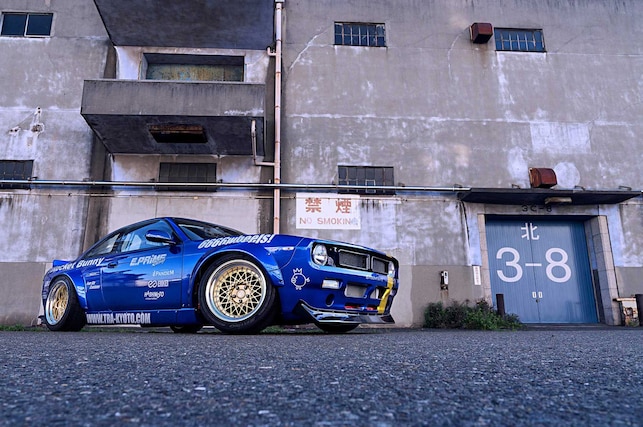 Notice another familiar face in this feature? Tomonori Idekawa paid us a visit while we were shooting at E.PRiME. Featured in 2018, we'd only seen David Ishikawa's photos of the Rocket Bunny Boss S14 previously; however, seeing this beauty in person was a treat. Under the hood, nothing short of awesome with a turbocharged RB25DET swap and bright red paint scheme applied to its semi-smoothed bay. We particularly love the two-tone paint with gold stripe, which Idekawa-san applied himself. The unique paint scheme is carried over to the interior as well, something we've never seen before.