Auto News - Four One One

Frankfurters On The March, Mitsu's New Galant And Eclipse, And Florida Sees Things Clearly, Sort Of 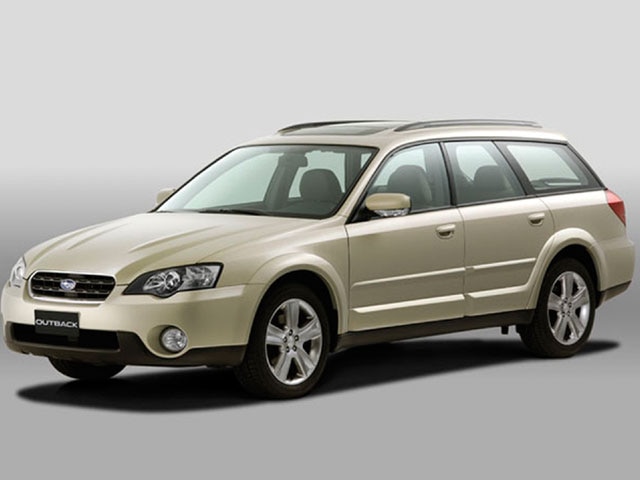 Who Hates a Hummer?
We used to think it was no one, but apparently the anti-SUV crowd in California has something about the H2 and other mega-utes. In August, Reuters reports, vandals set an auto dealer's warehouse afire in West Covina, Calif., destroying a fleet of to-be-sold Hummers. Across town, more vandals spray-painted Ford and Benz SUVs with nasty slogans like "Fat, Lazy Americans." The FBI is investigating the losses as terrorist incidents; the Web site for the green radical group Earth Liberation Front has claimed responsibility for the attacks.

U.S. Has More Cars than DriversFor the first time ever, America's drivers are outnumbered by their cars. The spooky new stat from the Bureau of Transportation Statistics says that each of the 107 million households in the U.S has an average of 1.9 vehicles for the 1.8 drivers that live inside them. The most recent survey of the same numbers found about the same number of vehicles to drivers. The increase in vehicles across the country comes from longer commutes, more teens with cars of their own, and longer-lasting cars, Reuters reports. According to the survey, the average person in the United States takes four trips per day, with almost half of them being errands, which we explain to our spouses does include returning tapes to the adult video store.

The new Galant is far and away a better car than the one it replaces. It's based on the Project America platform that already has spawned the Endeavor crossover wagon and is to also offer up a new Eclipse coupe (see it elsewhere in this column). Like the Altima, it's grown into a new mainstream role that puts it squarely in the thick of what's left of the mid-size American sedan market.

The '04 Galant arrives in four trim levels: there's a DE with black mirrors and a four-cylinder engine. The ES is the volume leader-Mitsu estimates it will account for 70 percent of all Galant sales next year. It too is powered by a four-cylinder engine. The uppercrust trim levels are the LS and GTS, both equipped with a throaty V6 and enough equipment to bog down an MLB ballboy. Prices range from about $18,000 on the DE to more than $26,000 for the GTS, with the mass-market ES checking in around $19,000 base.

Equipment check
The engines are both relatively unsophisticated powerplants that feel sturdy and strong. The 2.4-liter four-cylinder pounds out 160 horsepower and 157 lb-ft of torque, and is mated to a four-speed automatic transmission. It's pretty effective except in long passes, where you'll practically feel your pulse speed up in the hope that you'll keep a faster pace than the semi behind you. Still, it's pretty well suited for 90 percent of what you might use a family sedan for, except the daycare-center slalom.

The engine in the LS and GTS is a larger, more-pistony 3.8-liter SOHC V6 with 230 hp and 250 lb-ft of torque. With Sportronic controls available only on the V6, it's a decent shifter that shocks only by the lack of a fifth gear. A five-speed automatic is in development for the life cycle, but there's no indication it's very near. Against five-speed Accords, Camrys and even Explorers, the Galant's most striking omission is one you'll notice every time you pull it out of Park.

Under its Altima-like skin, the Galant rides on MacPherson struts up front on subframe and multi-link in the rear. The ride motions are mostly pleasant on the lesser models: hustle the four-cylinder LS around and it absorbs most road impacts well. Tighten up the line into a curve and you notice more imprecision in the rear end, a little squirm and some movement before it settles into tire squeal. The GTS is significantly tauter but probably a bridge too far in terms of ride quality. Who wants a family sedan that rides like a sports coupe? (Put your hands down...it's a rhetorical question, dammit.)

The Galant's steering is well done, as are the brakes and their even modulation and short pedal travel. Four-wheel disc brakes are standard on V6 cars, and optional on the ES; electronic brake distribution comes with the ABS system. Base cars have 16-inch wheels with 60-series tires; 17-inch aluminum wheels with 55-series rubber are available with the GTS, and a ten-spoke wheel can be had on the ES and LS.

Trading spaces
Is the Galant the most handsome Mitsubishi ever? We'll leave that to the guys with queer eyes for those things. We can say it looks like a Dodge Intrepid, only narrower, mated to a Nissan Altima. The Galant's height has been increased by more than two inches, to 57.9 inches. Rear legroom is up an inch to 37 inches, 57.1 inches of rear shoulder room. And the body is 100 percent stiffer twisting and 140 percent bending.

Inside it's a roomy affair. It's the trim that's the major letdown. Semi-industrial trim covers the dash, door caps and the steering wheel. The center console has similar issues and could use a gaggle of five gay men to touch it up. Trim on the lesser versions is not even as nice as that-but the fake maple on the GTS is too low-matte to approach reality.

The bottom line
What you get with the Galant depends on the letters you choose. The GTS gets everything: leather is standard (optional on ES and LS), as are 17-inch wheels, white-face gauges, and a power driver's seat. A power driver seat is optional on the ES and LS. Standard on the GTS are side airbags. All cars get 140-watt audio with four speakers and a CD player; a 270-watt eight speaker Infinity Premium audio package is optional on the ES and LS and standard on the GTS.The bottom line: the Galant is a basic vehicle that covers all the bases. It doesn't break ground with stability or roll control or a radical new shape, but it no longer sidelines Mitsu with tech overkill or a too-compact size.

In Other Words...
Mazda Pays for RX-8 MistakeMazda is paying for misquoting the power output of the new RX-8 four-door coupe. Japan's fifth-largest carmaker says it will give out $500 debit cards and extended warranties to early buyers of its RX-8 four-door because it overstated the rotary-powered car's horsepower. Early numbers put the manual gearbox version at 247, when it only registers 238 after some final emissions tuning. The automatic-equipped version also drops by 10 hp, to 197 hp. Mazda will repurchase some of the vehicles as well.

IIHS Says Side Airbags are GoodThe Insurance Institute for Highway Safety says its latest brain work finds that cars and light trucks with side airbags suffer fewer fatalities in accidents than vehicles without them. In the case of vehicles equipped with curtain airbags, fatalities dropped about 45 percent; in those with airbags mounted in the seats, the death rate still was 10 percent lower than in vehicles without side bags. Left unanswered: how many people die if a windbag rides in the passenger seat and talks too damn much.

Cell Phones Aren't the Only Problem...
A joint study from AAA and the University of North Carolina finds that most of us are doing something else when we should be paying attention to driving - but talking on the cell phone isn't the worst problem. The study of 70 drivers in North Carolina and Pennsylvania found that 97 percent of drivers distracted in their cars were reaching for something; 91 percent were playing with the radio; and just 30 percent talked on the phone while their cars were moving, according to the Associated Press. As part of the study the drivers had cameras planted in their cars for a week, and researchers chose a random three hours of tape to watch for distracted driving. In total, the study found the average driver is distracted about 16 percent of the time. Various states are considering making driving and talking illegal, after New York State became the first to do so last year.

Honk If You're Legally Blind
Florida is the nation's official waiting room for God, Buddha, Mohammed and even that Japanese golfing religion, we think. So it's only fair the state legislature has come up with a way to patrol its senior citizens' driving abilities. After a long battle with the old-folks powerful state lobby, Florida's lawmakers finally passed a law in May that will test people's eyesight every time they want to renew their driver's license. That is, as long as the driver is older than 80 years old, the Associated Press reports. No word on whether the state will also test to make sure drivers are actually still alive.

Auto News - Four One One
Photo /

Import Tuner
2021 Lexus LC Convertible: 6-Figure Price Tag But An Unforgettable Experience
With Lexus' LC Convertible finally hitting dealerships months after its reveal at the LAIAS, we were able to get our hands on 1 for a day to give you our two cents on it.
Sam Du – Aug 12, 2020

Import Tuner
Saved by Senna - History and Facts About the Acura NSX
Whether you call it an Acura or a Honda, the NSX is a super-sports car for the ages.
Conner Golden – Aug 12, 2020