Eiiji "Tarzan" Yamada Is Put To The Test 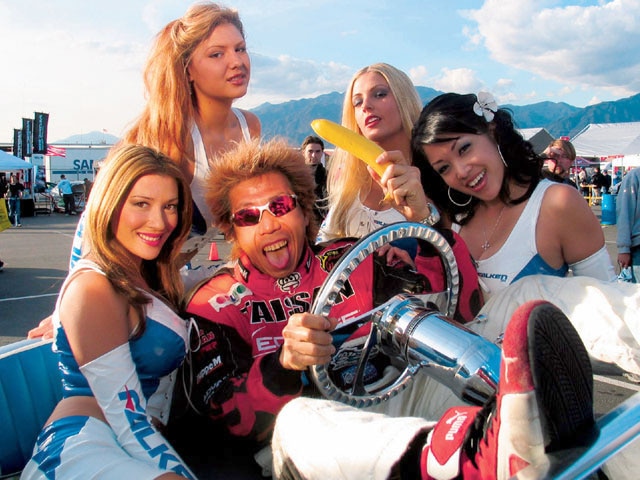 Pimpin' Ain't Easy
In the world of the king of pimps and hustlers, the insurmountable Rudy Ray "Dolemite" Moore of the 1970s, pimp-slapped the cool out of criminals and spin-kicked his way into the living rooms of American TV as a the coolest cat on the block. In the '90s Calvin "Snoop Dogg" Broadus, solidified himself as "Tha Doggfather" of West Coast rap. Perhaps the biggest pimp purveyor in today's rap game, you can often find him sporting a diamond studded pimp cane while perfecting the C-walk at numerous public appearances, followed by an entourage of hundreds of exotic supermodels. So where am I going with all this talk of glitz and glamour you ask? Society has portrayed the typical pimp as a smooth talking, '76 Cadillac Coupe de Ville-cruising, egocentric male that makes women scream in an orgasmic frenzy. That basically sums up everything this next man we describe is not. Meet Eiiji "Tarzan"Yamada of Japan. Tarzan is what you would not call a typical pimp. With notable features ranging from a short and lanky stance, furry Chia Pet-type hair growth, a perverted Japanese smile and lightening quick sukebe [pervert] hands that love to grope women's breasts-without their permission of course. Sure Tarzan doesn't sport the infamous "I'm Gonna Git You Sucka" fish tank shoes, nor the lime green velvet suit with matching bellbottoms, and most notably he can't speak a word of Jive or Ebonics-dig it? That is, unless Engrish (nonsensical English words written or spoken by Japanese) is now considered the cool language of the playas.

Whut Ya Name Baaaby?
Some men like to finger-paint while others like to recite poems; Tarzan Yamada on the other hand likes to pick up on vulnerable and unsuspecting women. When we say women, we're not talking some 50-plus menopause case, we're talking the long-legged individuals who are heavy up top. Consider calling them prime candidates or victims-take your pick. As we rewind back to our interview with both Tarzan Yamada and Ueo Katsuhiro [April 2004], Tarzan professed his love for women with breasts the size of "Mount Fuji" and proclaimed pimp status, proclaiming women nip at his heels wherever he goes. Is he the next Brad Pitt? Highly unlikely, but in giving him the benefit of the doubt, I offered Tarzan the chance to prove me wrong at the February 28, 2004, D1 Grand Prix and prove to me as well as the readers his pimp claim to fame.

Conclusion to Observations
To my surprise many of the models seemed to enjoy this comedian/race car driver's presence. The infamous slaps followed by colorful cussing was not witnessed when Tarzan repeatedly grabbed the models or used his banana to charm his way into their hearts. Damn, maybe he was correct all this time and really is some Japanese-bred pimp and not just a chimp? We'll I'm thoroughly convinced, but I'll leave it up to you to come up with your own conclusions.

Win an Autographed T-shirt from Tarzan!
Note to Readers from Tarzan: "Hi everyone! Pimp Master Tarzan here! I will be giving away five Vaka-Mon T-shirts autographed by me. To enter, show me how much of a Tarzan fan you truly are. Crazy, sexy, humorous, serious, it doesn't matter!"

Send your emails and images to info@sunautomobile.com by July 30, 2004 to be considered. Include your T-shirt size. There's only L or XL available for the sizes, so please specify. And we may just give you whatever we feel like anyway!