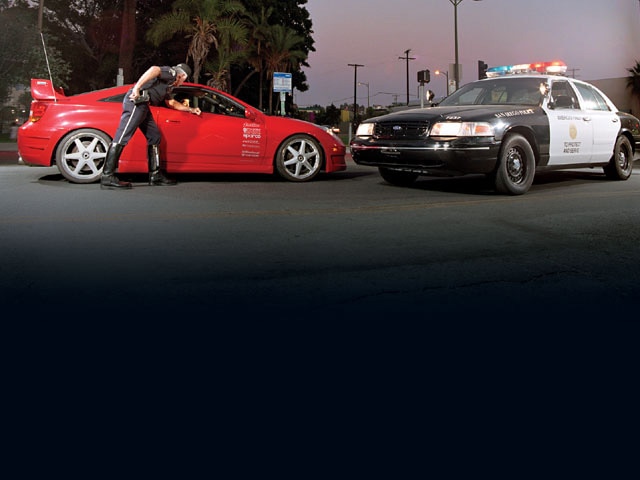 A friend recently sent me a link to an article posted on AAA's Web site. For those of you not familiar with it, AAA is an enormous, roadside-assistance organization. You know, you breakdown, you call, the tech comes and shows your ass how to put gas in your car or tows you home. And it conveniently offers discounts on various hotels should you be completely shit-out-of-luck. It also seems that its publication, Westways, has become increasingly concerned of late with street racing, which it described as "fast-growing in the Southland," and how it "can be fatal."

Well, no world-breaking news there. Illegal street racing, and its devastating consequences, has been a major problem for many years. It proved to be a massive obstacle for our industry during the early years, when the industry was gaining wider acceptance and transitioning into the multibillion-dollar business that it is today. Street racing is a hindrance that magazines such as this one and many others under the Primedia banner have condemned since day one. Regardless of our industry's roots, our goal all along has been to gain acceptance and help the industry transition into a business with a profitable future. For some this transition created careers, for others it legalized events, but for most it created a way for us to remain involved with our passion. Unfortunately, as with pretty much any case, the bad apples make the headlines and the good ones don't.

Anyway, I wanted to share with you pieces from this interesting (well, I'm trying to be polite), if inaccurate, article that in part blames our magazine for fueling such disastrous and sad events. And if you want to see it for yourself, go to www.aaa-calif.com/westways/0505/features/deadlygame.asp.

"Locally, a culture has developed around these illegal and sometimes impromptu races on freeways, city streets, and country roads. It's fueled today not only by high-octane gasoline and nitrous oxide, but also by the $29-billion-a-year aftermarket parts industry, magazines such as Import Tuner and Sport Compact Car, movies such as The Fast and the Furious, and depictions of high-speed racing in automakers' multimillion-dollar ad campaigns. For those who race and the unsuspecting motorists and bystanders who cross their paths, the result, all too often, is injury and death."

"'... much of the media makes street racing look fun and glamorous.'" -Michelle Rodriguez of the Los Angeles Police Department

"'If your kid is swapping out tires every month or replacing engines, there's probably something going on.'" -Greg Sloan of the San Diego Police Department's Drag-Net unit

"San Diego and surrounding cities passed laws to make it illegal to even watch a street race; violators can be fined and do jail time."

"The police also have been trained to identify illegal modifications to cars, such as certain exhaust systems, so they can arrest potential street racers in nonracing situations. And if a street race causes a death, 'not only the driver who caused the collision but even the driver of the noncontact vehicle can be charged with murder,' Sloan says. 'It used to be manslaughter, which in practice is one to three years jail time. Now we're talking second-degree murder, which is 15 years to life.'"

"In Los Angeles, for example, the police can confiscate street racers' cars and eventually crush them."

"As authorities crack down on traditional street racing, racers have developed techniques that are more difficult to deal with, among them spontaneous highway racing. 'One or more racers will cruise the highways late at night, flashing their accessory lights - a common sign they're looking for a race,' says Sergeant Fred Furey, who runs the Regional Traffic and Auto Theft Bureau for the Orange County Sheriff's Department in Aliso Viejo. 'Another racer will pull alongside, they'll give each other a sign, and the race is on. They'll zip in and out of traffic at high speeds, then maybe slow down and decide whether they want to race again. In some ways, it's scarier than drag racing, because a lot of innocent motorists get caught up in it.'"

"Besides the carnage, street racing often involves theft and insurance fraud. Sometimes the money for parts comes from indulgent, unassuming parents; sometimes it comes from a teenager's job. But sometimes the parts are stolen."

"'A kid who wants a new look to his car might key his paint job, "steal" his car's wheels, or slash his car's interior and report it to the insurance company as vandalism,' Bender says. [Mike Bender is an auto-theft and insurance-fraud specialist formerly with the Los Angeles Police Department and the National Insurance Crime Bureau.] 'Or if he needs to replace an engine, he might report the car stolen, and when it's recovered, blame the blown engine on the "thief."'

-Westways magazine. "A Deadly Game: Street racing is fast-growing in the Southland. Too often, it can be fatal." By John Lehrer