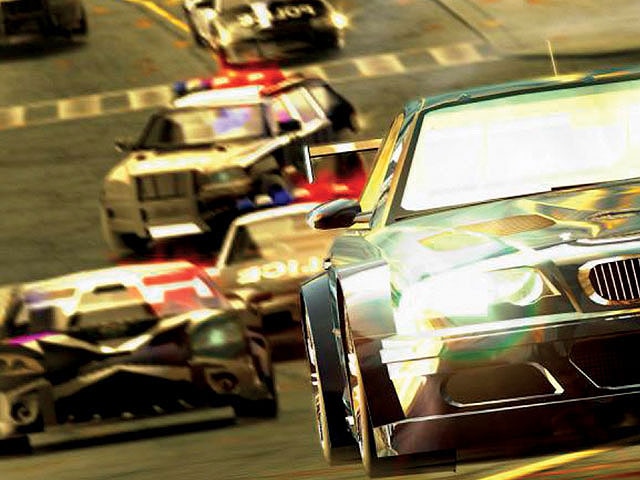 For a completely different type of racing game, take a look at Naughty Dog's Jak X: Combat Racing. Legendary platform heroes Jak and Daxter are back, but in a brand-new racing game that leaves their platforming roots far behind. A deep story line drops gamers into Jak and Daxter's world as they are forced to race in the Kras City Grand Championship in order to save themselves and their friends from a terrible fate.

Racing environments are gorgeous and both industrial courses and natural terrain courses are part of the tournament. The best part of Jak X is the vehicles, which are funky, cool and fully upgradable. Vehicles get "snap ons" for multiple body segments that can include body parts, paint and paint patterns, decals and other body mods. Upgrades come in more than just decals, and Jak can take advantage of projectile weapons, smart bombs, turbos, shields, ranged weapons, and catastrophic attacks to take out other drivers in order to cross the finish line first.

10 tracks with multiple
configurations, including mirror and reverse tracks, keep the contests interesting and challenging. Racing environments are destructible and provide excellent opportunities to take out rival drivers by blowing up stuff, forcing them off the road or into piles of debris. Real physics means each vehicle takes damage, and gamers who are reckless will feel the changes in the vehicle handling and see their racer loaded with dents, scrapes, and even various body parts destroyed and hanging off. There are a nice number of game modes like Time Trial, Death Match, Time Box, and Team Death Match, plus special race events and on-track bonus tasks that make Jak X more than just an average racing game.

For the first time in the Jak and Daxter franchise, multiplayer and online gaming are available. In the multiplayer game mode, two players will be able to choose from several characters before battling it out in head-to-head racing. Online mode lets up to six players race at once, and is surprisingly expansive with Team Play, Ranking Lists, Buddy Lists, Clans and a few other options. Another added bonus for PSP owners who get the up-coming "Daxter" game, have the ability to get special unlockables like decals, new vehicles, other modifications and even a new character. Naughty Dog is well-known for their excellent "Crash Team Racing," and they put that expertise into Jak X: Combat Racing to give gamers an inventive, crazy racing game that looks as good as it plays.

The Underground series is back, just in time to make the holiday season even brighter as EA releases the excellent new Need For Speed Most Wanted. New gameplay and customization features go a long way to keep this series fresh as gamers are challenged to out race rival drivers and escape the police using both driving skills and evasive strategies. Getting to the top of the illicit Blacklist to become street racing's "Most Wanted" is a wild ride that gamers are going to love.

NFS Most Wanted looks fantastic with cars and urban environments that are photorealistic and bring the whole Underground world to blazing life.

Competition is even more intense as players enter the illegal street-racing scene in order to gain street credit to move up the ranks of the Blacklist. It's more than just winning races, it's a combination of sweet driving skills, tricky street moves, and the ability to trounce rivals while staying ahead of the police that scores the big points in this game.

Online racing is available for Xbox, PS2, PC and the brand new Xbox 360 console. Xbox 360 owners can look forward to next generation graphics that use real time lighting and mapping techniques for the coolest, best-looking racing game to date.

It's another hit for EA's Need for Speed series, as Most Wanted gives gamers more of what they love: hot cars, intense street racing challenges, and the ability to look good while beating everyone else on the road. Need for Speed Most Wanted is available for every console and portable device, so there are no excuses not to check it out.