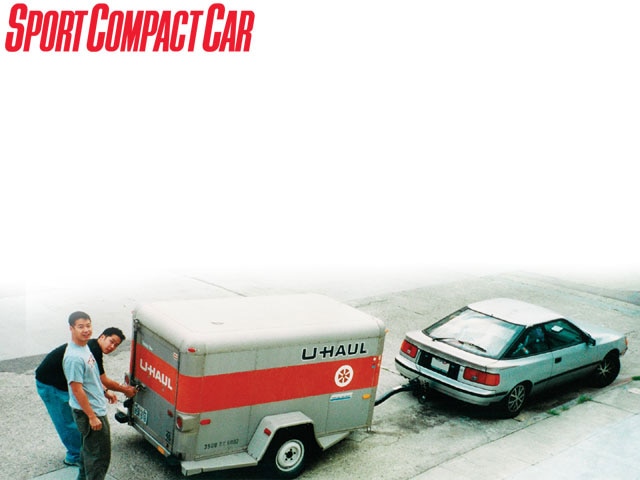 True story: The day I turned 16, I went into the local DMV and took my driver's license exam. I scored 100 percent, which matched the equally impressive perfect score I managed on the written test. As a testament to my obvious driving skill, I proceeded to log three speeding tickets in my first three months behind the wheel.

I received the first two citations in my brother's 1986 Toyota Celica GT-S hatchback, one of which required time before a judge and the humiliation of being lambasted in front of my mother. I got hit with the third in a 1983 Toyota 4x4 pickup my parents hoped would slow me down. Instead, I totaled it a month later while driving my sister to school. I was subsequently booted from the family car insurance plan and spent many moons trying to get back in the good graces of my father and State Farm. That's the truth-and it still hurts.

This issue is also about the truth, so let's bring the pain right away: My name is Edward Loh and I am the new editor of Sport Compact Car.

The truth is, for some time now, SCC has been without an editor. Although his name was kept on the masthead, Josh Jacquot actually departed several months ago to join the previous SCC editor at an automotive Web site. Savvy readers may have also noticed that Dave Coleman and Jared Holstein left a while back as well. While they both still contribute, Dave has moved on to bless one of our favorite auto manufacturers with his brutally honest engineering geekitude, and Jared headed up to Northern California to learn the fine art of jewelry making (really).

Despite the many departures, SCC has been able to maintain its strong reputation as the source for sport and compact car performance. Before my arrival, Associate Senior Editor James Tate and Engineering Editor Jay Chen spent many long, thankless hours putting out a great magazine, despite being down on manpower and resources. But now it is my turn to lend a hand and the dint of my years of experience behind the wheel, under the hood, and in front of various judges.

This issue marks a turning point. You will begin to see changes to the look, feel, and content of SCC as we add members to our team and redefine the sport and compact car landscape. But don't worry; there will be no radical departures from what you love about SCC. We have no plans to give up our position as the leading provider of useful technical information, budget/high-performance tuning tips, and compelling automotive features-all written in plain, simple English, devoid of BS.

But we do want to add to this mix. I am proud to announce that SCC has entered into an alliance with Motor Trend, our older brother here at Primedia and one of the world's foremost automotive publications. The plan is to combine their sterling reputation and unrestricted access to all things automotive with our passion and focus on sport compact car performance. Uniting our strengths allows us to bring you breaking news and exclusive features we never could have before. A great example of how this relationship has already paid dividends appeared in the last issue.

I arrived near the end of production when the new partnership was announced, and we immediately got down to business. We stuffed in a first drive of Mazda's Kabura concept coupe only days before we shipped-something that could have never been done without the help of Motor Trend. That was a great start, but there are even better things on the way.

The truth is, I know you may still be skeptical about what's in store with me behind the wheel. That's fine; the judge, the CHP, all of the insurance companies, and even my parents felt the same way. But I've made it this far and I'm ready to go even further. So I'll tell you what I told them: Don't worry, I promise things will change for the better. Have a little faith. I won't put a scratch in 'er.