Colin McRae World Rally Championship - Hero To Many,God To Me 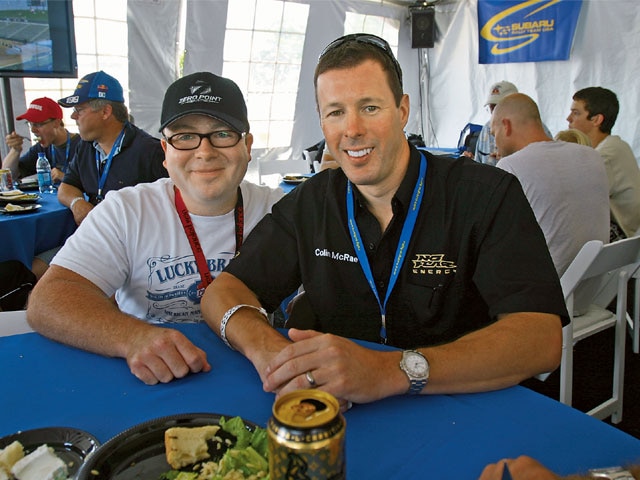 They say you should never meet your childhood heroes. I guess it's something about them not being as cool as you had envisioned, like when James May revisited the Lamborghini Countach in Top Gear. Or maybe the expression exists because your heroes are too cool, making you feel like a jackass when you actually do get to talk to them. Whatever the case, when I saw the words 'Colin McRae' on the roster for ESPN's X Games Rally premiere, my heart nearly stopped.

See, I grew up in some strange places. And in strange places, they watch two forms of racing: Formula One and the World Rally Championship. While both are undeniably awesome motorsports, I found myself lying on the floor of our house in Bolivia, glued to the TV, watching rally cars spit ice and dirt across the screen. And one car in particular drew my interest. It was a Ford Sierra Cosworth, driven by a man with a steel glint in his eye who knew no concept of fear. The kinda guy who you could kick down and he'd leap back up to attention, ready to do it again.

Colin McRae popped on the scene and immediately gave superstars like Didier Auriol and Carlos Sainz something to worry about. With his sheer determination and no-bullshit after-the-action interviews, McRae quickly became my childhood hero. I watched as he worked his way up the pack, soon winning stage after stage. I felt like I knew him as he wiped the sweat off his brow and hurriedly gave a few words to the camera before idling his car into service. I could tell if he wasn't ready to get back on the horse after a colossal wreck, and I sensed when momentum was going to land him another victory.

After watching McRae drive the snot out of virtually every car ever campaigned, it was crushing to see him leave the WRC. I tried to follow him in Paris-Dakar, but the long and mostly straight stages were difficult to get into, and the entire event was short-lived compared to a season of racing different courses around the world.

Yet now, somehow, I'd once again get to see the hero I'd looked up to in my junior years. Only this time, I'd be sitting right next to him, in the same tent at the same table, shooting the shit. The distance I've come since sitting too close to the TV in a slew of Third World countries and the speed at which I've been traveling hit me pretty hard once I sat down with the man. It's difficult to explain, but this landmark made me feel like I could take a breath and stop pushing for a few minutes.

I guess the thing I hadn't bargained on in the 'Don't meet your childhood heroes' maxim was that I simply wouldn't know what the hell to say. When I finally got face to face with Colin, my mind went blank. Of the trillions of questions I had thought up in the last seventeen years, I could remember none. For the first time in my life, I was so humbled by someone's presence that I was completely speechless.

Eventually, I nervously blathered out some questions (on page 114), which he answered calmly and with immeasurable confidence-the way he drives. When we were done, I managed to get him to sign my helmet. "Can you sign my helmet?" fumbled out like I had just pulled my earmuffs aside and asked: "Have you seen my baseball?" But what am I gonna do? The guy's a god.