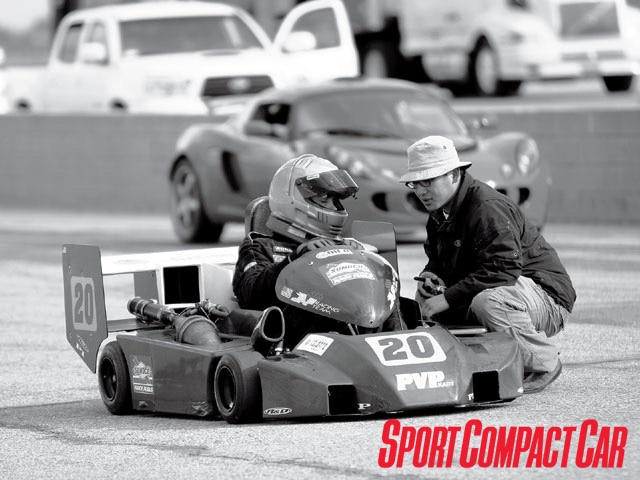 It hit me one night at the shop, while some power-hungry, new-fangled Subaru was being tuned on the dyno. We've been going about this all wrong. Our entire obsession with boost is a moot exercise. All over the forums, even in our editorials, we're obsessed with measuring or talking in terms of boost. What we really care about is flow, not boost or manifold pressure. They aren't even closely related: flow has to do with time, while pressure is an instantaneous measure.

While it says something when comparing boost levels in the same car with all the same hardware, any time the turbo, intercooler charge pipes-or even temperatures-are changed, boost takes on a whole different meaning. Boost, unfortunately, is all relative.

If you remember from basic chemistry or thermodynamics, air (or any gas) has dynamic properties stipulated by temperature, pressure, volume and mass, as well as the properties of the individual components of the gas. For simplification, let's treat air as a uniform substance, instead of a mess of nitrogen, oxygen, carbon dioxide and whatever else. This allows us to ignore things like the compressibility factor, specific heat values and lots of other stuff I've forgotten. The ideal gas law says that for a given gas, its state can be described by the amount (or mass) in a closed system its volume, pressure and temperature. More confusingly, change any one of these four properties and, in a strange kind of co-dependent relationship, at least one other property (or all three) will change proportionately.

Since co-dependent relationships are pretty confusing, we should hold at least one property constant. Let's say we charged a rigid volume like an air tank with air and sealed it. With two properties held constant, only pressure or temperature can change. Heating the tank, which increases the air temperature inside, sees the pressure rise, since all the heat makes the molecules bouncing off each other bounce even faster, exerting more pressure. Cool it down and the pressure drops.

If we only held volume and regulated the pressure, but allowed air to move in and out of the tank, temperature would have to change. In the real world, we see this a lot in propane tanks, since volume is constant, but as you burn off the gas and try to maintain the same regulated pressure, the bottle frosts over because only temperature is allowed to change. The gas temperature drops to compensate, causing the bottle to cool to the point where moisture in the surrounding air turns to ice and frosts the bottle.

If we took a snapshot of an engine, assuming the valves are closed and the turbocharger is boosting, we would have a scenario similar to the air tank (we'll define our air tank or closed system as everything from after the turbocharger up to the intake valves. This way we can ignore the turbo's pressure dynamics or the valves' flow limitations). With the volume of air inside held constant, only pressure and temperature can change. If we were to change to a larger intercooler, piping, or even a larger manifold, the same amount of air would drop in pressure or temperature, or both, on account of the increase in volume.

However, engines are dynamic things, constantly pumping air through, so the snapshot analogy doesn't work so well. Assuming the same system boundaries as before, let's look at the engine in steady-state operation. Since the wastegate is sometimes referenced off manifold pressure, we'll assume pressure is constant and ignore the pressure drop across piping and the intercooler. With larger piping and cooler charges from an intercooler, volume has increased while temperature has dropped. To balance this out, the amount of air in the system (which we now have to call flow rate, since time is passing) has to increase, which is exactly what we want-more air.

Old-school muscle car guys often talk about flow in terms of cubic feet per minute (CFM). This is volumetric flow rate assuming that the air is at standard temperature and pressure (STP). That's fine when talking about naturally aspirated carbureted engines sucking atmospheric air, but inside the manifold and after the turbo, temperatures and pressures are drastically different. More accurately, we should talk in terms of mass flow rates like pounds per minute or grams per second, which is how compressor maps and mass airflow meters think.

Mass airflow is far more useful because, regardless of temperature and pressure (volume is constant inside the engine), we know exactly how much air is inside. Once air passes the MAF sensor, the number of oxygen, nitrogen and carbon molecules don't change until fuel is added. It's the amount of air inside the engine that makes the power-not the pressure it's shoved in at. Incidentally, when we talk about air/fuel ratio, it's a mass ratio. This is why ECUs are calibrated in terms of mass flow. Knowing exactly how many pounds of air are flowing into an engine allows the ECU to calculate how much fuel to inject: 14.7 pounds of air for one pound of fuel for stoichiometric combustion. If it were a volumetric ratio, 14.7 cubic feet of air for one cubic foot of gas, we'd all be running electric cars instead.

Air inside a turbo abides by the same rules. While volume is constant, the temperature, pressure and mass flow all change. If you look closely at any compressor map, it shows these relationships exactly. The vertical axis is for different pressure ratios (or boost), while the horizontal axis is for mass flow rate. At a given pressure ratio, the mass flow rate can be all over the map. Obviously, we want the compressor to be at optimum efficiency, so if you ran across a pressure ratio line and found where it intersects the highest efficiency island, you get the mass flow rate. Comparing between two extremes, at 14.7psi (or 1.0 bar of boost, which corresponds to a pressure ratio of 2.0) a dinky GT12 turbo moves about 14 times less air than a GT60 turbo. That's why it doesn't help to talk in terms of boost.

Instead of talking about how much boost on what turbo kit, why don't we all do our homework and say how much air is moving through the engine? You don't even have to look at a compressor map. Just hook an OBDII scan tool to your ECU and have someone read the real-time signal coming out of the MAF as you tear down the street. The magic number is 10bhp for every pound per minute of airflow. It's a ballpark and will vary from 9.5 to 10, depending on how knock-tolerant the engine is, then everyone will know how much power potential that wheelbarrow-load of money poured into their car has bought. Whether or not your car makes that power is between you and your tuner.