Miriam Macmilan pilots her 1.5L turbo Honda into the record books at the Bonneville Salt Flats 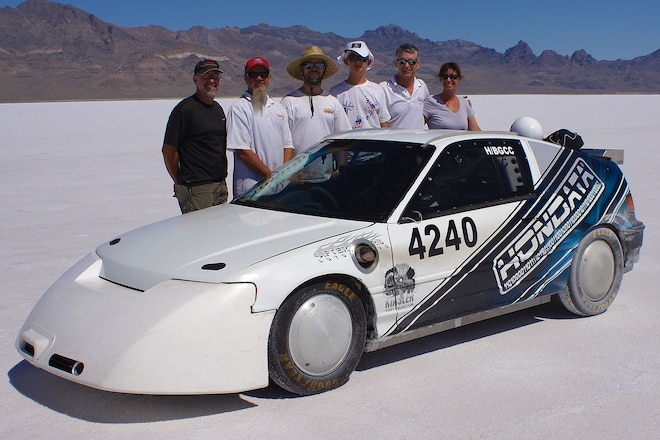 By now every Honda enthusiast should be familiar with the name Hondata. Founded in 1999, the firm specializes in modifying and reprogramming both Honda and Acura engine control units (ECU). Most of Hondata's customers build their cars for driving on tarmac or gravel. But recently they tried their methods out on a sea of densely packed salt?

Ever year during SpeedWeek a number of speed junkies use the Bonneville Salt Flats in Utah as their proving grounds. This year the wife of Hondata co-founder Miriam Macmilan joined the attendees of SpeedWeek and set a new speed record of 238.221 mph. Just three years ago she was named New Zealand's Queen of Speed when she hit 207 mph.

This year, Macmilan competed with her turbocharged 1.5L Honda CRX in the H/BFCC class (1.0- 1.5 litre Blown Fuel Comp Coupe) when she easily shattered her 2011 record of 220mph. The Hondata CRX is powered by a K20a engine with Cunningham Rods, Darton Sleeves, CP Pistons, IPS K2 Camshafts, Deatschwerks injectors, a 06 Civic Si intake manifold, and a Garrett GTX-3582 turbo. The end result is a lightweight car making 747 wheel horsepower at 9600 rpm.

Due to the immense heat during the event, the team had to replace two turbochargers that failed in the last measured mile and ultimately prevented Macmillan's CRX from reaching its full potential. A record is an average over two passes over successive days.

"Nothing in this sport is ever easy", says Macmillan. "We're on the verge of a 250 mph record (400kph) which we think we can do next year with a bigger turbo and better cooling."

Check out all the products they have to offer at www.hondata.com. 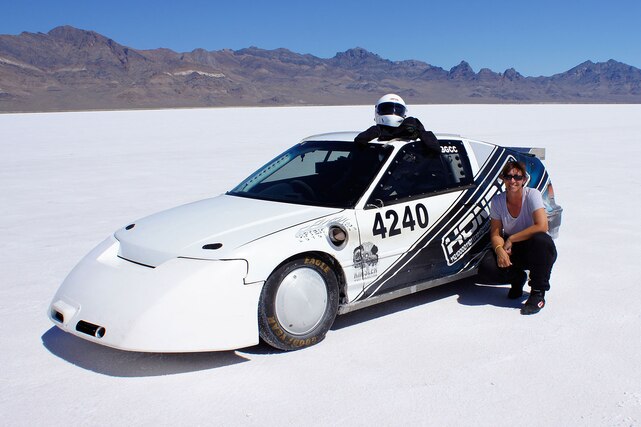