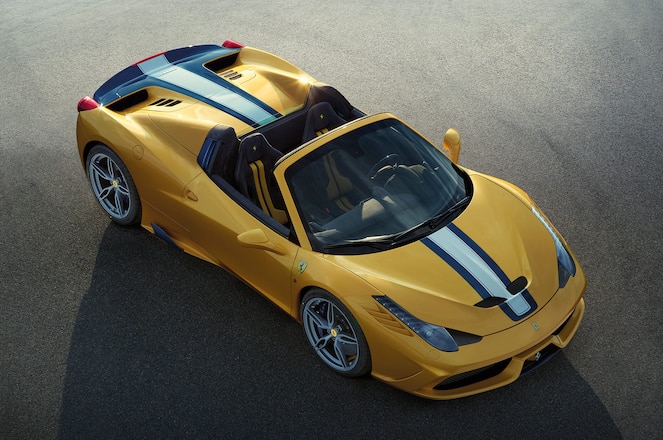 Ferrari is removing the roof on its 458 Speciale at the 2014 Paris auto show, with the resultant creation called the 458 Speciale A (for Aperta, Italian for open). Like the Speciale coupe on which it is based, the Ferrari 458 Speciale A is a high-performance model of the 458 Italia. 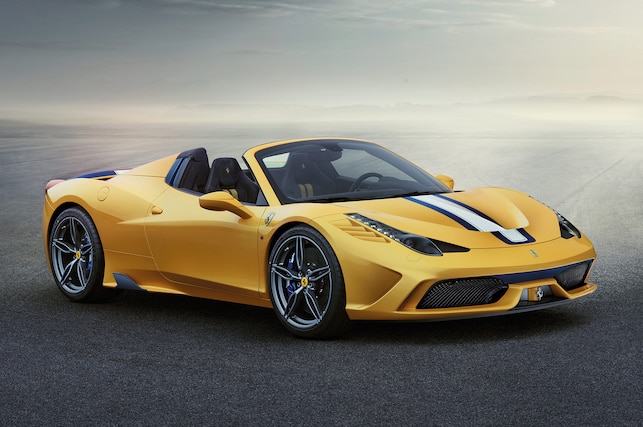 As in the coupe, the Ferrari 458 Speciale A benefits from tweaks to its 4.5-liter V-8 engine that bring output up 34 horsepower to a peak of 596 hp at 9000, while torque is unchanged at 398 lb-ft at 6000 rpm. Even though the convertible model is said to be 110 pounds heavier than the 458 Speciale coupe, its stated 0-to-62-mph time of 3.0 seconds is unchanged. Ferrari says the 458 Speciale A will lap the company's Fiorano test track in one minute, 23.5 seconds, matching the coupe's lap time.

The Speciale A has a powered aluminum convertible top which can open or retract in just 14 seconds; that mechanism, as well as some additional bracing, accounts for the mass increase compared to the coupe. However, at a claimed 2954 pounds dry, the Ferrari is still relatively light. Like the coupe, a form of electronic traction control called Side Slide Angle Control helps mete out power to the rear wheels for optimum grip around corners, while active aerodynamic components help stick the Ferrari to the road. At the Paris show, the Ferrari 458 Speciale A will be shown in the yellow paint seen here, with Blu Nart and Bianco Avus striping, and gray split five-spoke wheels, while the interior receives blue carbon-fiber trim and Alcantara bucket seats.

Just 499 examples of the Ferrari 458 Speciale A will be sold, for a price that has yet to be disclosed.