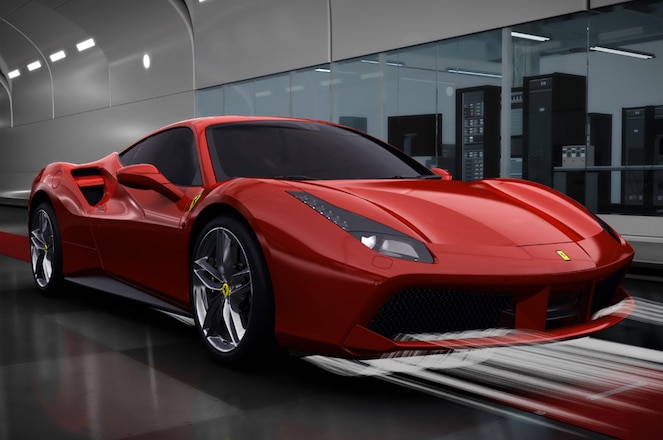 Drive the Ferrari 488 GTB fast on the freeway and you'll notice a little DRS logo appear on the dash. That stands for drag reduction system, and signals that flaps at the rear diffuser have lowered to change the airflow around the rear of the car and make it slip more cleanly through the air. Just like the DRS system on Sebastian Vettel's F1 Ferrari. A new video from Ferrari shows off the many aerodynamic tricks employed to make the 488 GTB as slippery as possible.

From its split front spoiler to aero-optimized door handles to its patented blown rear spoiler, the Ferrari 488 GTB is one of the most aerodynamically sophisticated road cars on the planet. In this animation, you can see for yourself exactly how sophisticated it is. We begin in a wind tunnel with a CG model of the 2016 Ferrari 488 GTB. Here, we see how the front end directs air both to the radiators and the flat underbody. Next we move to one of the biggest visual differences between the 488 and the 458 Italia it replaces: the scalloped rear fender intakes. These new features route air to the engine and intercoolers, and accelerate the airflow through the outlets next to the taillights to reduce drag. The animation of the blown spoiler demonstrates how it increases downforce without increasing drag, and finally we're shown how the DRS works in the newly designed rear diffuser.

Check out the video below to see how Ferrari worked its aero magic on the new 488 GTB.