You're looking at the most expensive car ever sold at auction 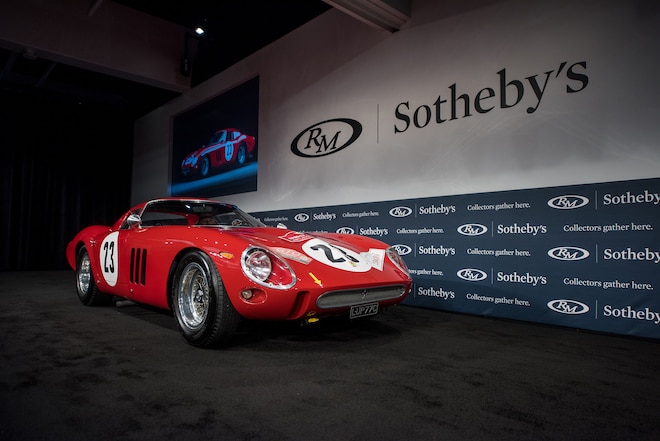 RM Sotheby's shattered the record for most valuable car to sell at auction Saturday night with the highly anticipated sale of a 1962 Ferrari 250 GTO for $48.4 million dollars. RM opened bidding on the car at $35 million and within a minute bidding had moved up in million-dollar increments to $38 million. From there, call-in phone bidders duked it out in ever smaller increments until the hammer finally fell several tense minutes later at $44,000,000. After buyer's commission is added, the final sale price was $48,400,000.

The 250 GTO that sold is one of fewer than 40 cars built and is widely considered to be the most desirable Ferrari model ever due to the story of its creation, its success on track in period, and its legacy as the last Ferrari race car that was equally at home being driven on the track as it was on the street. Because 250 GTOs were built to race, many were heavily crashed or received replacement powertrains. While this car, originally a more desirable Series 1 example, did receive new Series 2 bodywork in period, the work was commissioned by the factory and the car went on to win the Targa Florio with its new sheetmetal. The car miraculously still retains its original engine and gearbox after all its years of racing, which undoubtedly helped the car's value when it crossed the block.

The previous automotive auction record was also set by a Ferrari 250 GTO, which brought just over $38 million at Bonhams' 2014 Quail Lodge sale. Because 250 GTOs rarely come up for sale with so few built, they tend to attract worldwide attention when they do, as well as serving as a sort of barometer for the health of the classic car market.