Goes on sale in March with upgraded features and engine options. 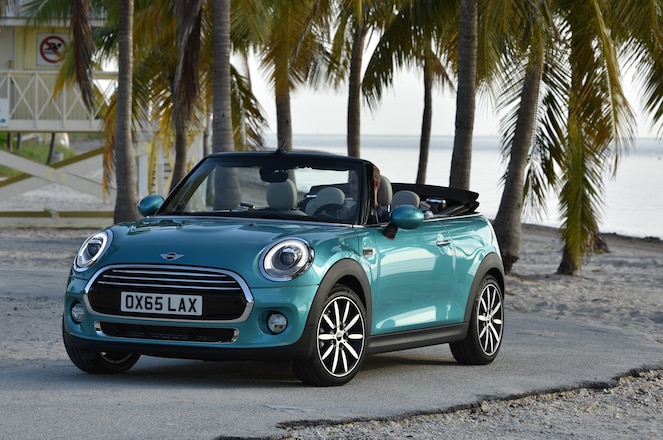 The new, bigger 2016 Mini Convertible goes on sale in March with upgraded features and engine options.

Just like it did with the Cooper hardtop, Mini has expanded the size of the Mini Convertible for the 2016 model year. The model is 4.5 inches longer and 1.7 inches wider than its predecessor, and has also increased in height and the length of its wheelbase. The new model has gained over 25 percent more cargo volume to accommodate more luggage in the back. That extra room enhances the car's Easy Load function, which allows users to raise the soft top frame while the roof is closed.

For 2016, the Mini Cooper comes equipped with four seats and plenty of new equipment. A 6.5-inch Mini Connected infotainment system is standard, while a larger 8.8-inch display with navigation is available. The Mini Connected system also has an app that warns drivers to put the top up when rain is coming. Other new features available on the Convertible for the first time include LED headlights with LED DRLs and rear lights, a head-up display, parking assistant, driving assistant with camera-based active cruise control, collision and pedestrian warning with initial brake function, and rearview camera.

The Mini will be available in 11 exterior color options, including new hues like Caribbean Aqua and Melting Silver. Buyers looking for extra pizzazz can opt for a Union Jack soft-top in a herringbone pattern.

Base Cooper convertible models receive power from Mini's new-generation 1.5-liter inline three-cylinder engine that produces 134 hp and 162 lb-ft of torque, up from 121 hp and 114 lb-ft in the previous version. Meanwhile, the Cooper S boosts an improved 189 hp and 207 lb-ft of torque from a turbo 2.0-liter four-cylinder unit. Both models come standard with a six-speed manual transmission, although a six-speed automatic is optional. As of now, we have no information on a potential John Cooper Works model.

Mini hasn't yet announced pricing for the new Convertible, but don't expect it to be too much more than the current model's sub-$27,000 starting price. The Mini Cooper and Cooper S convertibles head to U.S. dealerships in March 2016.