New bones and new production home in the U.S. 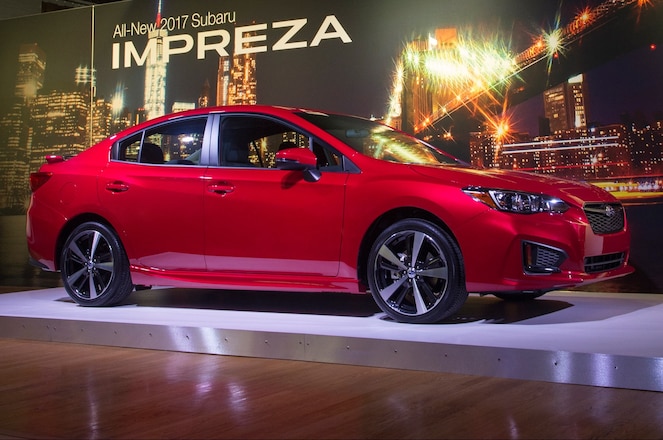 The new 2017 Subaru Impreza debuts at the 2016 New York Auto Show and the compact marks a lot of firsts for the automaker. In addition to being the first Impreza built in America, the fifth-generation compact sedan and hatchback will ride on the company's new Subaru Global platform that'll eventually underpin most Subaru models and was developed to accommodate electric and hybrid powertrains.

Subaru hasn't said if the 2017 Impreza will get an electric or hybrid version, but it will be powered by a revised 2.0-liter, four-cylinder boxer engine that now features direct-injection. The engine will be more fuel-efficient and slightly more powerful at 152 hp, which is 4 more horses than the current 2016 Subaru Impreza. A continuously variable transmission is the only gearbox confirmed. A Subaru spokesperson says the automaker is still deciding if the new Impreza will be offered with a manual transmission in the U.S. That said, if the manual gearbox does make it over, it'll likely only be offered on the base model. As before, Subaru signature Symmetrical All-Wheel Drive system is standard.

The Impreza's new platform brings a long list of benefits. For starters, Subaru says the structure is 70 percent more rigid than its predecessor thanks to more use of high-strength steel. This should make for a noticeable improvement in cabin noise, harshness, and ride quality. The chassis should also handle better with a revised suspension that Subaru claims reduces body roll by 50 percent compared to the outgoing Impreza. The automaker also says the compact has improved straight-line stability, which should be helpful for those long road trips or commutes.

The new platform is also bigger. The wheelbase, for example, grows 1.0 inch to 105.1 inches, overall length grows 1.6 inches (182.1 inches for both sedan and hatchback), and overall width jumps up by 1.5 inches (70.0 inches). The larger exterior dimensions should also result in a roomier interior, though those measurements are not yet available. The current Impreza offers 43.5 inches and 35.4 inches of front and rear legroom, respectively. 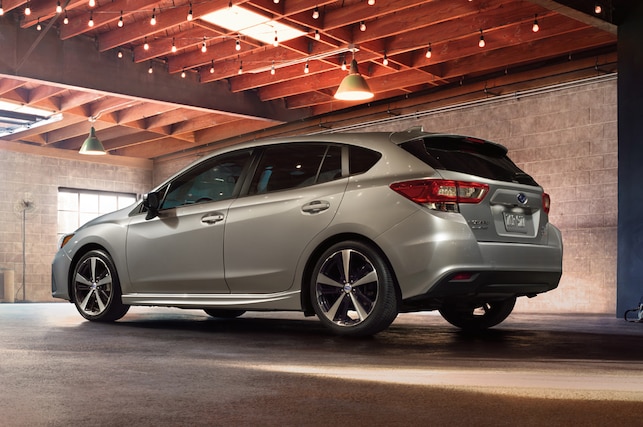 Like before, the 2016 Impreza will be offered in four trim levels: Base, Premium, Sport, and Limited. The most notable change is the availability of the Sport trim in both the sedan and hatchback. (Currently, Impreza Sport is only sold with the hatchback body style.) All Imprezas come standard with a 6.5-inch touchscreen infotainment system, as well as Bluetooth, Android Auto, and Apple CarPlay connectivity. Also standard are 60/40-split fold-down rear seats and a tilting and telescoping steering wheel.

Subaru revealed the Impreza sedan and hatchback concept late last year, and the production versions are fairly close representations of those concepts. Although the production model doesn't have the concept's sharp and dramatic headlights, the front fascia still looks aggressive thanks to its sculpted bumper and hood. The side profile is a mix of straight and curvy lines, and the rear end features taillights that are larger and more stylish than in the current model. The Impreza Sport sets itself apart with a blacked-out grille, color-matched rocker panels, a black interior with red contrast stitching, unique gauges, and aluminum pedals. The Impreza Sport sedan is fitted with a rear spoiler, and the Impreza Sport hatchback gets gloss black accents on its rear gate. Meanwhile, the interior, with nicer materials and sharper styling, appears to be an improvement over the current model's.

Subaru says the 2017 Impreza will go sale toward the end of the year, so pricing (and official fuel economy figures) will be announced close to the launch date.