Two turbo-fours, a hybrid, and a 10-speed automatic transmission debut 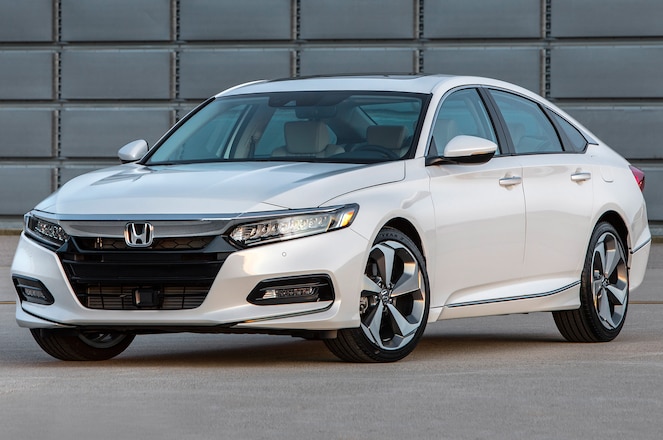 The more upscale 2018 Honda Accord enters the world with a new powertrain lineup, which drops the V-6 for new turbocharged four-cylinders, a new hybrid system, and a 10-speed transmission.

The all-new 2018 Accord goes on sale this fall with the hybrid to follow in the winter. The world debut today in Detroit and Los Angeles reveals a stylish and sportier 10th generation of the midsize sedan. There will not be a coupe, a body style that only accounted for about 4 percent of sales, said Jeff Conrad, senior vice president of the Automobile Division of American Honda. He does not think Honda will lose those coupe sales. "We put coupe goodness in the sedan."

Replacing the Accord is a big deal, given its history of being a top-selling midsize sedan—a perpetual second place to the Toyota Camry but often first when it comes to sales to retail customers, not including rental and corporate fleets.

But Honda also must reconcile that the Accord resides in a segment in decline as consumers continue to flock to crossovers over sedans. The Accord is now No. 3 in Honda sales, trailing the compact CR-V crossover and the recently redesigned Civic sedan, coupe, and hatchback line. Conrad said he expects the CR-V will end the year as Honda's best seller but he thinks the Accord's new styling will ensure it continues to sell about 350,000 a year in the U.S., its biggest market, and it might entice buyers back to the sedan market which has not had a lot of new entries to re-energize it in recent years. "I think the new product will make people stop and take a look," he said. And while it won't stop the shrinking of the segment, "we might be able to slow it down a bit."

All Accords, including the new hybrid, will be made in Marysville, Ohio. The engines and continuously variable transmission also come from Ohio, and the 10-speed transmission is made in Georgia.

The lineup has two all-new direct-injection turbocharged engines. The 1.5-liter base engine generates 192 horsepower and 192 lb-ft of torque, up from 185 hp and 181 lb-ft, and is mated to a continuously variable transmission. A short-throw, six-speed manual is available on the Sport trim.

Now that the 2018 Honda Accord has debuted, learn more about the Accord right here: 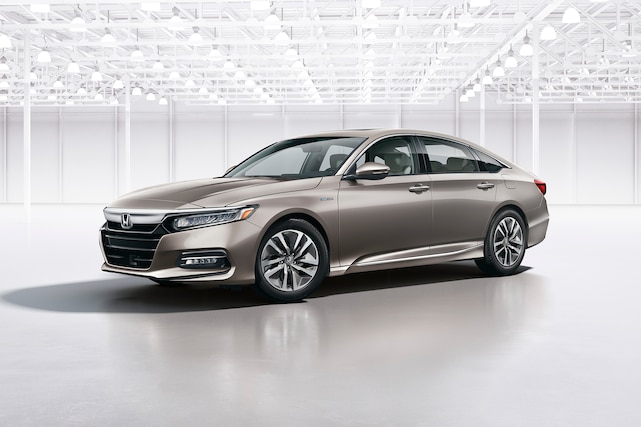 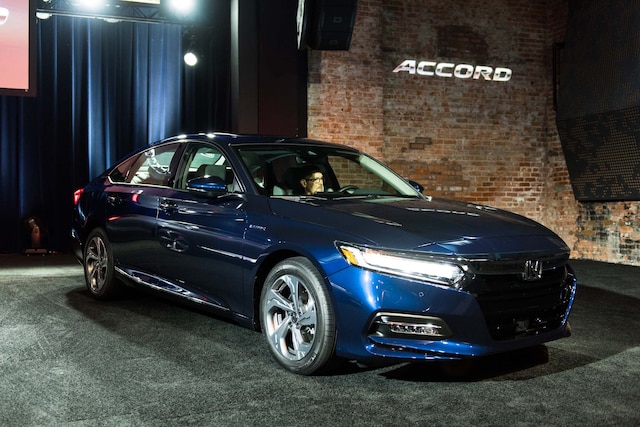 Whereas Toyota is sticking with an optional V-6 engine for its upmarket Camry, Honda is moving to a 2.0-liter turbo four-cylinder. Derived from the unit in the new Civic Type R, the turbo-four generates 252 hp and 273 lb-ft of torque, replacing the outgoing 278-hp 3.5-liter V-6 that accounted for 15-20 percent of sales. It is tuned for low-end torque and does not require premium fuel. The engine is paired with the first 10-speed automatic in a front-drive car and is also available with the six-speed manual transmission on the Sport trim. Conrad said currently about 4 percent of buyers opt for a manual and one in five Sport trim buyers choose it.

The hybrid uses a 2.0-liter naturally aspirated Atkinson-cycle engine and has electric motors that are the first to use magnets containing no heavy rare earth metals. The new power unit with the battery pack is now under the rear floor instead of in the trunk, freeing more cargo room.

There are no plans for a plug-in hybrid, Conrad said, noting the Clarity plug-in is coming this fall.

The car has a new MacPherson strut front suspension for better ride and handling; it also has a new multilink rear suspension. New for 2018, the Accord gets its first adaptive damper system on the Touring to adjust shock absorber damping force every 1/500 of a second.

It is not offered with all-wheel drive. Conrad said that would have compromised the platform and interior space. Honda has many other AWD-equipped vehicles to choose from.

The 2018 Accord is wider, shorter, and lower, but the wheelbase has grown by 2.16 inches for increased interior space. It is also 110 to 176 pounds lighter with a more rigid body structure and new chassis.

Although the wheelbase is longer, the overall length is 0.39 inch shorter, pushing the wheels farther toward the corners. The car is 0.39 inch wider with a wider wheel track, the height has dropped 0.6 inch, and occupants sit lower in the car, so there is still ample headroom and shoulder room. Rear seats have been pushed back for an extra 1.9 inches of legroom. The overall passenger volume of 105.7 cubic feet is an increase of 2.5 cubic feet, and there is more trunk space.

"This is unquestionably the most dramatic remake of the Accord we've ever done," Conrad said.

The design goal was to give the car a more athletic stance with a low and wide body, more raked windshield, short overhang, low hood, large, more angled greenhouse, and narrow roof pillars, as well as sculpted body sides and an upswept decklid. The result is a cleaner, simpler look—and it is 3 percent more dynamic. Designers gave it a bolder and more upright front fascia. It retains the chrome wing grille bookmarked by LED headlights and foglights. In the back are LED taillights and duel exhaust ports. 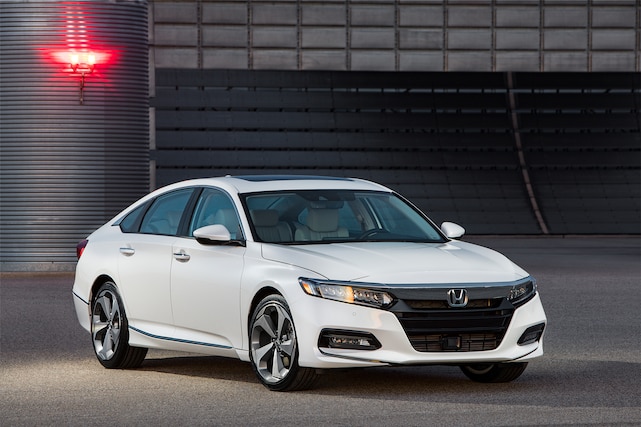 Inside there is a new soft-touch instrument panel in a three-tier design, as well as a new steering wheel with thumb rests and paddle shifters. The driver's seat has 12-way adjustment, and the front seats can be heated and cooled.

There is a new infotainment system with an 8.0-inch touchscreen that retains buttons for volume and tuning—in response to critics of the lack of a redundant knobs on the Honda Civic. The Accord has Apple CarPlay and Android Auto compatibility and a number of apps. There is also a 7.0-inch display in front of the driver. The Touring trims of the 1.5-liter and 2.0-liter models have a new 6.0-inch head-up display.

Pricing will be announced closer to the on-sale date. Conrad said it must be competitive in a "super heated market where everyone is fighting for sales and share."